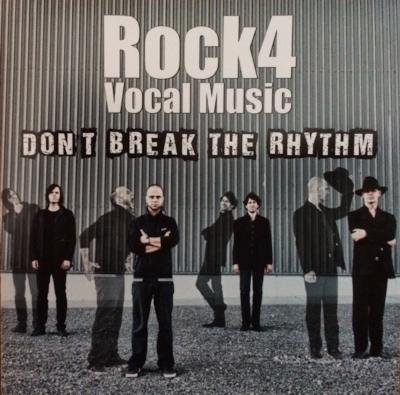 Rock4 is best when the group rocks out. Lucky for all of us, this happens a lot. Don't break the rhythm is decidedly new wave, keeping the beat through ballads, uptunes, and everything in between. Even the subdued reptitions of Chasing Cars sound like the lull between one dance track and the next, not like any major change of pace.

Crazy In Love sounds like it fell onto a Yes record, the poppy percussion and downtempo stylings keeping momentum against the odds. Rock4 isn't a group of wailers; this is more of a classic rock tribute album, a more refined version of The Exboyfriends. The voices are strong, the sound is tight. The album loses a little focus during the choral bits, like the ones that flutter through Vienna, but I hear that as the siren song of the '70s pulling back against the four-on-the-floor of the '80s.

The rock and roll lines blur completely on Comfortably Numb, when a real guitar floats into the mix. It's a little jarring, but not as much as you'd expect. After nine preceding tracks of late-night dance rock, you just sort of go with it. Speaking for myself, I was still reeling from the Samuel Barber club remix, which is not something I might have picked out — but it's got a good beat, and you can totally dance to it. That said, I would have skipped the tambourine on Somewhere Only We Know.

Rock4 should sell better to an English-speaking audience than some of the other continental groups making similar music. For one thing, the English is better. Dutch transitions a bit better than Deutsch, all other things equal. Also, the uniform sound serves as a strength. Don't break the rhythm is consistent, professional, and stays in character. If you like these songs, you'll like these songs. If you only know some of them, the rest will slot right in. It's time to rock all night long.

Rock 4's Crazy In Love is damn near perfect: fascinating textures that embrace sparseness, a genre-jumping twist on a beloved, but not overdone song, and a lead that aches with emotion. It's far and away the best of Don't break the rhythm, an album that marks another step in the band's sound towards something more patient, more juxtaposed and less raw.

Yes, there's Luc Devens's enviable high tenor to rock out the ending of Don't Break This Rhythm and When Doves Cry, but the album features a wash of mellow moments, too: Insomnia, Chasing Cars, Somewhere Only We Know, Vienna, even the dance anthem, One ... Rock4 is clearly going for a very, very slow burn.

Insomnia is an art piece, part smokey, spoken solo, part forgettable electronica. Adagio For Strings is an experimental mixture of the Barber classic — some dance beats and even some gently distorted vocal guitar sounds. And that oddly disjointed and thought-provoking mixture isn't far off from Chasing Cars which also features classical elements, distorted vocal guitar, and thankfully, the pop song mentioned in the title. Adagio seems like the underscore for something outside the album — a show or dance, perhaps for a Cirque show. Without resorting to that imagined visual, it's hard to follow the logic of the stylistic changes. But Chasing Cars, which changes the ratios of this odd formula, works somehow.

The album isn't purely vocal. There are some noticeable effects. The drums feel sampled and artificial or at least not vocal, but yet there are many times when the sung vocals feel extremely natural. And then Comfortably Numb ends the album with a full-blown band and vocal performance. So listeners may find it hard to focus in on this album's vision.

I remain a fan of Rock4 and the group's considerable talents, but this album feels unfocused, more like a series of sketches than a finished work. Perhaps these arrangements work best in a live performance, and this album is meant to be a memento of that experience rather than a stand alone piece. Rock4's calendar is packed solid and the group is largely performing this album as a show, so perhaps those lucky attendees are the ones best situated to appreciate the artistry behind Don't break the rhythm.

Don't break the rhythm is off the charts. I like to reserve a perfect score of "5" for tracks and albums that exemplify only the utmost talent, taste, and creativity. The music needs to be unique and dynamic, arranged to accentuate the uniqueness and depth of the human voice, performed and produced with passion and precision, and something that I feel anybody, aca-fan or not, would appreciate. But now the scale needs to be recalibrated, because my usual standards of "5" just don't capture how much I enjoy what Rock4 has done with Don't break the rhythm.

What Rock4 does so well is blend styles. There's soft pop, classic rock, progressive house, '80s dance, psychedelic, and baroque. What?!?! The differences between these genres is juxtaposed so boldly, yet so seamlessly in Adagio For Strings, Chasing Cars, Vienna, and Don't Break This Rhythm. At the same time, surprising rhythmic and melodic similarities transcend the musical realms and glue this album together. Luc Devens is the genius credited with all ten arrangements and fusing such wildly different styles into the signature sound of Rock4.

Two tracks stand out on this standout album, for two completely different reasons.

Insomnia, originally by Maxi Jazz, Sister Bliss, Rollo, and Jamie Catto of Faithless, is a techno-trance-dance club masterpiece. The short bout of lyrics is as absurd as something you would hear from comic group Flight of the Conchords, and delivered about as absurdly. The beat that ensues is the kind of addicting groove that compels you to loop one song for days as you scour the internet for remixes, giddily marveling at how such aural excitement wasn't in your life soundtrack for the past twenty years.

Comfortably Numb, originally by David Gilmour and Roger Waters of Pink Floyd, is not a cappella. That's okay; it's still fantastic. There are more than enough vocal embellishments to qualify as a vocal rendition. What's perplexing, though, is that so much percussion on the rest of the Don't break the rhythm (particularly When Doves Cry) sounds like a drum machine. Closing the album with the blatantly guitar-laden Comfortably Numb makes you wonder: how much of the percussion actually IS a drum machine? Is that cheating? Is it still vocal music without real vocal percussion? What's real recorded vocal percussion anyway these days? Does it matter? I'm still listening, and if anything I'm even more intrigued with the recording process. At the end of the day there is definitely singing, and the singing is definitely off the charts.

The musicians of Rock4 get a cappella. They get recording. They make every note serve a purpose in the flow of the arrangement and the blend of the mix. They balance natural timbre with studio trickery, suspenseful silence with primal energy, and conventional pop with progressive creativity. If that's not a perfect "5", I don't know what is.