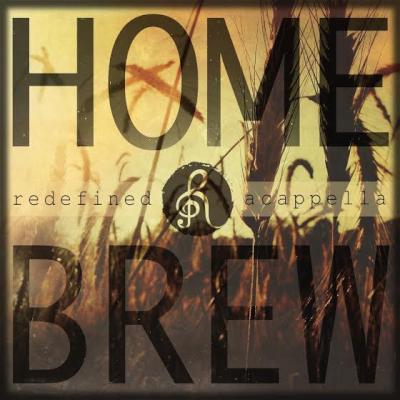 One of the interesting things about writing for RARB is how, as time goes on, I have gotten to watch the choices an a cappella group makes from album to album. With college groups like Redefined, a mixed group from the University of Wisconsin-Madison, I've seen how membership and leadership changes affect the recorded output in comparison. With the group's last album, Inside Out, Redefined produced a fairly standard yearbook album which sounded pretty good from top to bottom but failed to distinguish itself from so many other collegiate albums. So, when I received this latest album, Home Brew, I was anxious to see whether Redefined had decided to stay the course or veer into new territory.

In many ways, Home Brew follows the same tested formula, with similar results. The few moments where the group tries to innovate or at least depart from rigid adherence to the original song show the promise lurking under the surface with Redefined. Unfortunately, such moments are few and far between.

As with Inside Out, group alum Dieter Schaaf's production here is generally pristine, spacious, and inviting. The problem is that a few of the songs on Home Brew could really have benefitted from some grit, some rough edges, some raw emotional honesty. For example, the River Traveller mashup begins with a hauntingly bare solo and then builds with a transparent and fragile trio, making it the most engaging thing I've heard from Redefined on either album. Then, the entire group enters with far too heavy a hand, brutally eradicating the ethereal atmosphere. Each time I listened to this track, I had to stop what I was doing for the first 1:17 of the song, and had it ended there, I would have awarded it a "5". However, the remainder of the song so disengaged me that the final result warranted no more than an average rating (or "3"). While Schaaf is clearly talented at creating a certain type of sonic space consistently, he would be well-served to explore each song individually, finding a palette that makes it stand out from its neighbors on the tracklist.

The group's larger musical identity suffers from similar flaws. Songs tend to sound homogenous, bleeding into each other without distinction or identity. None of it sounds bad, but little of it sounds exceptional either. To be sure, there are some sparkling moments. Pompeii has a distinctive take on the breakdown and there is effective use of space at times. Give Me Love has spots where arranger Connor Smith starts to play around with the structure and Schaaf does the same with the sound, teasing out a darker version of Ed Sheeran's song. Sadly, neither is willing to fully commit to that aesthetic. Smith's arrangement of Ben Rector's cover of Whitney Houston's I Wanna Dance With Somebody is also noteworthy. The Redefined version has some personality with the duet a little more than halfway through, followed by a breakdown section which heads into a few bars of Please Don't Stop the Music and some ringing reverse belltones. The problem is that despite the innovation, the sound is dull and lethargic, lacking the kind of energy or sheen that could make it a real breakthrough moment for the group.

Setting aside these departures, Redefined's decision not to break free from either a cover song's mold or the group's consistent overall sound suggests a controlled approach which might well be necessary for managing nineteen singers. Unfortunately, it leaves Redefined with yet another middling album, one which just scratches the surface of promise and talent which the group seems to have awaiting release.

Home Brew, the latest from Redefined, presents itself as an album entirely arranged and produced by the members themselves. What I found after delving into Home Brew was that, in general, while the album is a step up from the group's previous release Inside Out, it's still lacking that extra push of personality and attitude to put it over the top.

One of the most compelling arguments working in Home Brew's favor is its great song selection. There's a broad choice of nostalgic pop hits from Christina Aguilera and Whitney Houston meshing with recent tunes from Ed Sheeran and Bastille. Everything sounds well ordered and arranged in such a way that there's not really a disconnect while switching between genres.

Vocally, Redefined sounds well blended and in tune. What prevents Home Brew from being "great" as opposed to "good" is the execution and energy behind the songs. Most of the covers are quite clean sonically, but many of them feel as though they've been stripped of their most vital qualities in their translation to voices. Redefined's version of Come On Over Baby is a great example of this: the blend is great, the vocal percussion is well-produced, but its delivery in general feels scrubbed clean of all its playfulness and smoky, sensual disposition. The backing vocals feel a little metronomic and don't quite groove the way they could. The result is a song that feels a bit more karaoke-like than a true reinvention of the early Aguilera hit.

September is a nice choice for a throwback but feels like it's just short of hitting a home run. The blend here is great, particularly amongst the female voices, and the percussion is nicely accented. The intricacies in replicating the horns are also a nice touch. The soloists have a nice hand off and exchange of verses too, but a lot of time the singing sounds oddly thin, particularly while reaching higher to hit the notes during those iconic falsetto moments. The momentum that should be building up to create grand, over-the-top choruses vanishes. It's a tall order to fill, but the falsettos need to be boisterous — invigorated to give those segments dynamic impact.

You Go Down Smooth is easily one of the best on Home Brew. It's a pretty straightforward replication of the original, arrangement-wise, but the cover still undoubtedly carries over the same bouncy, energetic, and fun sensibilities. This is precisely the kind of vitality and conviction the group needs to bring consistently to each of its songs.

In the end, while Home Brew isn't necessarily a strong "4", this doesn't mean it should be overlooked. With a good tracklist and a decent spread of moods and genres, it's still an album that will please most. Some highlights to check out include You Go Down Smooth, Blue Sky, River Traveller, and Give Me Love.

Home Brew certainly lives up to its name, having been entirely arranged, recorded, and mixed by current and former group members. However, I'm not sure the same can be said for Redefined as a group, since this album features an assortment of fairly "well-defined" a cappella.

The album starts off strong with the group's version of Pompeii, which was released as a single along with an accompanying music video last year. (Read RARB's review of this single here.) It's a solid first track, featuring a heavily-produced but engaging take on the Bastille hit. From here, though, things just get confusing as the next track throws us back to 2001 with John Mayer's Why Georgia, followed by some classic Earth, Wind and Fire, then moves on to Dido's Thank You. Without Pompeii, I might have spent my first time listening through wondering if someone had resubmitted an album from a decade ago.

There's no obvious theme tying the songs together, unless it's "singers our singers sound like". To their credit, nearly all the soloists on the album are well-suited to their songs, although occasionally lacking in intensity. I'll admit, it might have been difficult to find a singer that Robert Messenger would emulate better than John Mayer (or Lauren Boritzke with Dido), but I'd like to believe they could have tried. Many of the songs on Home Brew aren't quite old enough to be classics, nor did the arrangements manage to breathe any new life into them; they simply feel dated.

The most successful tracks are ones where it feels like the group has a sense of purpose. With Pompeii, the group obviously developed a story for the music video, helping with its intensity and cohesion. River Traveller similarly conveys a feeling of connection between the singers and the song. Other songs (Why Georgia, You Go Down Smooth) would be more successful without some consistently-distracting syllabic choices: this is an album of "doo-wa-ba-da"s and "zhen-da-zha-da-da"s. This makes it difficult for background parts both to help impart the emotions of the songs on the listeners and to maintain energy consistently.

As a yearbook album, Home Brew does a great job of showcasing each soloist. The group also has some solid production work from former group member Dieter Schaaf. For future recordings, the group would benefit from focusing on the intention behind the songs and telling a story the way the singers do with Pompeii. Approaching each song as if it were a music video would be a great exercise and should help soloists and background singers alike to be more intentional with their message.

A physical copy of Home Brew can be ordered by emailing the group at wisconsin.redefined@gmail.com.