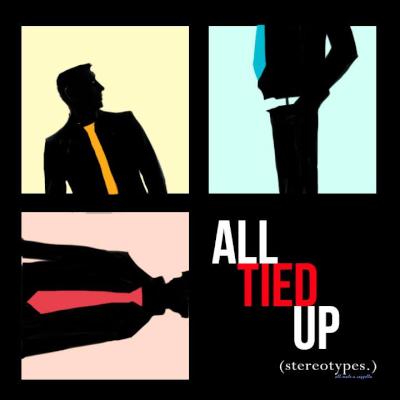 You are going to like this album. If you're here reading a cappella reviews, you're probably the type that likes rich harmonies and singers who project, recordings that glow, and soloists who were born to be in front of a mic. You probably also have a soft spot for poppy chord progressions, upbeat rhythm sections, and can always sing along with the biggest radio hits of the day. Call it a stereotype, but if you're the a cappella enthusiast I think you are, then All Tied Up by the Stereotypes is just the album for you.

The Washington University Stereotypes are your stereotypical collegiate group of fifteen to twenty talented young men, founded in 2001 and now boasting a discography of four full-length albums and one EP. They cover only the most stereotypical chart-topping singles you can think of, but they do this so bedazzingly well that you don't mind hearing just one more rendition. All Tied Up builds on this tradition with eight songs originally penned within the past six years, and one 1980s throwback from the ever-popular Journey. The emphasis on brand new arrangements gives the album a freshness and a consistency brimming with the excitement of uncharted territory.

The solos are phenomenal. Every lead is in a comfortable range (except some of the uncomfortable highs of Pusher Love Girl), where he can support his tone through both the quiet crooning and the sonorous belting. At barely twenty years of age, these vocalists have the confidence and charisma of professionals who have been on stage since before most of the Stereotypes were even born.

The arrangements are full. Kevin Vondrak and Leo Chang (who arranged or co-arranged the eight contemporary tracks) lay on the diction and the open vowel padding throughout the backgrounds. The multi-layered harmony complements the solo nicely, until it doesn't. The moment that sticks out most is in Medicine, where Chang tries to match vowel sounds with the lead and winds up blending "warm...brain" into a clumsy "wah-ain." Either stick to words or stick to open vowels, but the hybrid too often makes it sound like the lead and backgrounds are singing two different songs. In addition to the pads, there are rhythmic syllables and heavy percussion. Both are handled well, with an artiful balance of simplicity and nuance that only goes overboard in the breakneck kicks and snares of Separate Ways and the droning "ba da din" acoustic guitar strums of Goodbye in Her Eyes. Put it all together and you get an amazingly vibrant sound worthy of blasting from your car stereo.

All Tied Up listens much like the Tiebreaker EP released in 2013. The Stereotypes have ventured into some slightly more interesting material, but the song choice is still fairly stereotypical of male collegiate a cappella, and the arranging is still fairly straightforward. What sets this group apart is its ability to deliver such high caliber singing and production so consistently. That is why you are going to like this album.

Last year, I had the pleasure of reviewing the Tiebreaker EP released by The Stereotypes. The first thing I noticed, despite only being four songs in length, was that the most immediate impression was the full-force singing and energy that the group embodied. In reviewing All Tied Up, I have to note that I'm equal parts pleased and dismayed to say that it remains entirely the same.

On the one hand, having a majority power ballad album makes having that intense sound capability a major plus. The climactic moments are that much more powerful, landing their energy with the force of a crashing wave; it makes you want to wave a lighter in the air.

On the other, "soft/piano" is not a word that exists in the vocabularly of this crew, and any song needing tenderness is completely overwhelmed. You can get away with "All Rise, No Fall" on a short EP, but on a full album it just makes the cool things disinteresting. There's also a tendency for the bass line to overpower the rest, which could admittedly be worse — the lines themselves are pretty entertaining.

Tripp Wickersham is still a dynamo. He takes the helm on this version of I Won't Give Up, which is excellent. A fantastic cascade of dissonance leads you into the most original take on this song I've yet to come across. The first chorus is reset to completely new chords, a risky move that certainly paid off. The layering atop the melody in the bridge and the outro is incredible.

The arranging is on point, a definite improvement on the musical choices of Tiebreaker. My big issue with the previous arranagements was the simplicity, but Leo Chang and Kevin Vondrak definitely stepped up their game on this one. Pompeii, Medicine, and Lost at Sea all deliver some thrilling innovation on otherwise simplistic songs. But a quick note: let's get ahead of this "triplet/dubstep breakdown" thing happening on the back of popular songs, it's getting old fast.

So, weighing these notes, I was confronted with the decision of giving this album a score of "3". Missing out on some pretty basic elements like balance and dynamics make the repeat listenability of this product tank alongside the production and blend scores. However, is that outweighed by the trendsetting material contained in the blueprints themselves? Does the fact that the other elements are strong buoy up the score?

I like what this album is leaning towards, especially as an indicator of this group's progress and trajectory, and so I choose to trust that the gift horse has all its teeth today. I confidently give this album a "4" and anticipate future releases as the group continues to grow. Lastly, don't forget to credit your percussionists.

All Tied Up starts with an energetic cover of Separate Ways. The arrangement by Chip Broze is different enough while still staying true to the Journey classic. The track that follows, Medicine, features the graduating members of the group. The delicate interpretation by Leo Chang perfectly captures the heartbreaking nature of the original. The use of the "n" shadow vowel in "medicine" is an excellent touch. Pusher Love Girl feels rushed, lacking the relaxed feel of the Justin Timberlake original. Fortunately, a creative variety of syllables and some tasteful studio enhancements by Lieberman make up for an ineffective solo performance and that distracting rhotic vowel of "girl".

Danny Lamere's solo performance on Goodbye in Her Eyes gives Zac Brown a run for his money. However, the sound doesn't vary much in terms of volume; it just alternates between loud and too loud. The Stereotypes' adaption of I Won't Give Up is powerful and textured, filled with emotional intensity. As with Pusher Love Girl, Lost at Sea is rescued by Lieberman. Though the mashup with This Is What It Feels Like is thoughtful, the soloist lacks the energy to keep up with the background voices on this track.

The treatment and development of the "ay ay-oh ay-oh" motif throughout Pompeii is brilliant. At the final chorus, the motif is finally heard in its entirety, creating a profound sense of arrival for the listener. All I Want suffers from a lack of energy as the listeners' ears are dragged forward through a diatonic wash of sound by the soloist. All Tied Up concludes with a hopeful interpretation of What I Know by Parachute that ties the entire album together, especially with the ending!

With All Tied Up, the Stereotypes are exactly that — they're 'all tied up' with numerous other collegiate all-male groups doing the same thing. If the Stereotypes continue to hone in their energy and blend, as well as finding repertoire that accentuates the strengths of their soloists, I guarantee this group will come out on top of the game.