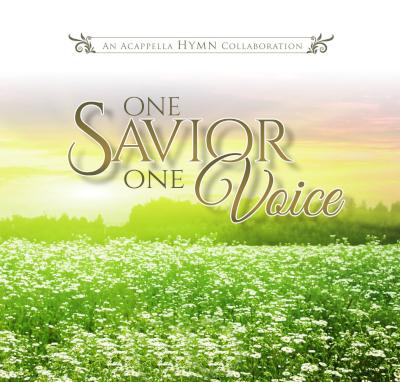 The story of One Savior One Voice is exciting, inspiring, courageous, heartbreaking, and renewing. It's a very loud, ringing chord of why artists must take risks and must find a way to set their art free. Read every word of this project, most especially its story; you'll be affected. Everything about the recorded result of One Savior One Voice is wildly impressive and thoughtful. Bringing together world-class arrangers and outrageously good vocalists and recording it all under Bill Hare's guiding light sets up a no-fail situation. And if you like hymns, you've just struck gold.

These hymns are the musical equivalent of peace. They are also, however, what we must rely on for cohesion, since the group admits the styles here cover a bit of everything. Turns out that even if you're working in a very defined framework — cherished Latter-day Saints hymns — you can still turn your vocal messages into nearly anything: purely choral, a sort of rock-star slant, a dash of musical theatre, and most predominantly on this release, vocal jazz.

The vocal jazz here is very accessible. I call it "swingy-friendly jazz". But for me, this makes it all harder to listen to on the album-level. Here's why. One Savior One Voice opens with two of the most exquisite choral pieces you'll ever hear in Come, Come Ye Saints and All Creatures of Our God and King. SoundStage's perfect blend and execution is basically unearthly; basically as celestial as the lyrics they wish us to feel. The group's pure resonance on vowels is outrageous. The singers possibly have the best diction-for-rhythmic-emphases and shapely phrasing on an a cappella album ever. Now let's examine one major point here: there are seven members in SoundStage. How often do you hear a spiritual a cappella choral choir with seven people? It's pretty unique.

So what would I expect from seven voices with this level of musicianship on an a cappella album? I'd expect vocal jazz, and that's largely what we get the rest of the time. So there's my personal disappointment: open the album with something I simply can't compare against another, and take it to where all a cappella fans have already been and where many are happily staying. Thankfully, the musicianship level never falters, so you're still getting a great package. In particular, I Need Thee Every Hour reminds you that maybe crossing styles simply doesn't matter with its stunning atmosphere and surreal soloist. But I suspect for some, the style crossing will matter, possibly a great deal.

May success continue to line up for SoundStage, and the group's visionary music director, Bradley Hampton.

One Savior One Voice is a reimagining of twelve traditional Latter-day Saints (Mormon) hymns in a jazzy a cappella style. A few of the hymns may be known to a general audience but I suspect most non-LDS listeners will be hearing nearly all of these for the first time. The arrangements and recordings don't always work effectively, but they do often enough to make this a great album. As an active LDS member myself, I very much like the album, but I suspect that even those of other faiths as well as the non-religious can find much to enjoy here.

SoundStage is a seven-member mixed group. The singing quality is very good, but there are only a few moments when the vocals make me sit up and take notice. But let's be clear, this album is more about the arrangements than about the singers. In that sense, it reminds me a lot of the album One Voice by Gladys Knight & The Saints Unified Voices —  it's a similar concept album of LDS hymns done in non-traditional arrangements. In this case, the arrangements are actually the sole reason for the album's existence. Group director Bradley Hampton had the idea to commission hymn arrangements from top (non-LDS) professional arrangers, and use them as the basis for an album. The arrangers he got for the project "have written for legendary vocal groups like Take 6, The Swingle Singers, The Manhattan Transfer, Chanticleer, The Dale Warland Singers, m-pact, New York Voices, The Real Group, P.M. Singers, and many more." It is easy to perceive some of those connections in the album — as just one example, I Stand All Amazed feels very Take 6-ish to me.

But who actually are these arrangers? The liner notes are silent on that subject, a major oversight. Fortunately, some Googling rapidly found me the album's web site, where an abundance of detail is presented about the album — not only who did the arrangements, but how the project came to be, how the arrangers reacted when contacted, how the album itself was rejected by the largest LDS book and music seller, and more. It's a must read.

For me, the two highest points on the album are Because I Have Been Given Much and I Am a Child of God. Michele Weir does a breathtaking job on the arrangement of Because I Have Been Given Much. What's normally a slow, introspective song becomes an intense rhythmic declaration of one's desire and willingness to serve others. There's a full minute of chanting before the main melody enters, and also an original musical motif which occurs between verses. I love it! I Am a Child of God, arranged by Matthew Selby, literally transforms from a children's song (it opens with children singing) into an exuberant, joyous celebration of God's love with the solo being cleverly traded back and forth between several of the singers, and some flavors of funk.

Not all is flawless, though. Come, Come Ye Saints is a challenging opening to the album, with periodic soprano vibrato issues and an arrangement that requires much concentration to follow. Some arrangements, Lord, I Would Follow Thee being the worst offender, weave in and out of strange chords in what seems to me to be a "let's do this because we can" style, rather than to serve an overarching musical purpose. Unfortunately, the soprano's wide and mechanical-sounding vibrato in the last 40 seconds of I Believe In Christ makes that song nearly unlistenable.

But all in all, this is a great album, and a very welcome addition to the often bland repertoire of LDS hymns. Kudos to Bradley Hampton for his vision for the project, to the various arrangers who participated, and to Bill Hare who did the recording, mixing, and mastering.

While music in itself is a powerful force, what can make it even more effective is the performer's ability to transport the listener into an entirely new mindset. One Savior One Voice does just that. Traditional hymns have new life breathed into them by an incredible list of skilled arrangers, as SoundStage takes the helm and delivers flawless vocals culminating in something truly spiritual.

In a digital age with literally everything being released online, it's easy to forget about the art behind the physical album. One Savior One Voice is packaged both professionally and beautifully from the imagery of a lush meadow, to the stacking of text labeling each track.

Regarding the actual music, this album is not simply track after track of good sounding music; this project takes you on a journey. From the first track of Come, Come, Ye Saints, the listener is introduced to a story of what's to come. In much of hymnal-type music, parts are straight harmonies off of the melody, whereas this track has a strong foundation of parts (almost ambient-like) that creates a great feel and texture.

SoundStage also has the ability to create such sereneness in its vocal delivery of the album. All Creatures of Our God and King is a good testament to this, as the track is mainly soft sounding throughout but keeps a firm feel and direction, especially in the transitioning of each soloist. Lead, Kindly Light incorporates a more uplifting nature than its predecessors, and also wonderfully demonstrates SoundStage's ability to perform as instruments.

The remaining tracks follow suit much in line with the intro tracks, with some noticeable standouts. I Need Thee Every Hour is a magnificent mix of dark and uplifting as the result of superior layering, soloists, and some of the smoothest bell tones I have ever heard. I Stand All Amazed is a great display of the group's rhythmic capabilities and delivery of gospel music. The group accurately recreates a Take 6 style with this Mark Kibble (of Take 6) track.

One Savior One Voice has very little to critique. There are a few tracks which exceed five minutes, which could have remained just as effective if trimmed down. Some of the higher voices tend to come across as operatic or use an excessive amount of vibrato in tracks like Come, Come, Ye Saints and I Believe In Christ. Lastly, with so many reimagined arrangements, some tend to fall by the wayside and seem on par with what the standard hymn incorporates, such as I Believe In Christ and Lord, I Would Follow Thee.

Whether looking at One Savior One Voice from a religious perspective or simply as a vocal project, the fact remains: it is an awe inspiring and compelling work of art. No matter your tastes for this type of music, something from this album will tug on your heart strings, causing you to return and listen again and again.