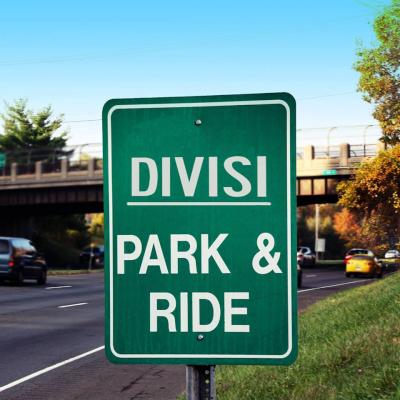 Inside the liner notes of Park & Ride, the men of CCSU Divisi have a short note to their fans, which they close by saying, "We had a ton of fun making this album, and we sincerely hope you enjoy listening." That's a mantra that should go without saying, but it's sadly not always apparent in many groups' recordings.

Luckily for listeners, Divisi owns that sentence in spades: it's obvious that these singers had fun making this album, from the attention-grabbing album opener Ain't Nothing Wrong With That, to the energy of the strip-club anthem Pour Some Sugar On Me, to the sultry Justin Timberlake medley What Goes Around/Cry Me a River. This energy and commitment to every song goes a long way towards making Park & Ride an easy-to-listen-to album: it's fun listening to singers who are having fun, and that infectious energy certainly made this listener want to sing along on more than one occasion.

Where Park & Ride falls a little short, though, is in its complexity: the execution of these arrangements is fine, but there's nothing terribly deep or nuanced about the notes that Divisi is singing here. The question is: does that matter? The crescendo on Stay is well-placed and well-executed, so does it matter that there's no crazy descant or arrangement nuances beyond block chords and extended notes? Yes and no. The singers' energy and dedication is a strong and convincing first step, but the second step in repeat listenability lies in peeling back the layers of the performance: the subtleties in the arrangement, the strength of the harmonies, the details behind a killer lead.

Divisi hints at the latter kind of greatness on Home, with its bouncy Mumford & Sons mash-up that adds an interesting depth to the song's meaning as well as to the song's arrangement. But even without that complexity, the rest of Park & Ride is still enjoyable to listen to and would make for a fun sing-along album on an aca-roadtrip. There just won't be many moments you'll rewind to and say, "Whoa, I can't believe they just did that!"

Central Connecticut State University's Divisi presents an eclectic crop of songs in its newest release. While some of the group's innovative ideas miss the mark, Park & Ride provides many clean, powerful covers of songs that span the last few decades.

Divisi kicks the album off in an energetic way with Ain't Nothing Wrong With That, with vocal passages that replace the original guitars. The group is effective with this and other tracks that update the original to fit the a cappella medium but don't attempt to reinvent the wheel. The soulful solo voice of Alex Clark on All of Me captures the John Legend tune's intent, and the added introduction to Runaway Baby gives a welcome contrast to the rest of the energetic cover.

Sometimes, however, an added introduction or changed texture detracts from the experience rather than enhancing it. The choral stylings of Cry Me A River are great in theory, but seem sort of random as the track continues. Too Close starts with a rhythmic texture that becomes so melodically disjunct and busy that it draws substantial focus from the soloist. There is something forced about the stretched introduction to Pour Some Sugar On Me that does not seem to match the emotional tenor of the song. All three of these tracks recover well, but first impressions are important in a listener's perception.

As for first impressions, the compression on the first track is a bit heavy which works for that particular song. However, through nearly the entire album there is a sort of perceptible emptiness from the speakers: a certain live quality to the group's sound that is missing, as if the group is in a box. The resultant sound is not displeasing, though I can't help but feel as if different mixing choices or circumstances while tracking could have yielded a fuller sound. After listening on a number of different devices, listeners should be advised that this album is optimized for headphones rather than car or computer speakers.

I don't typically take an entire paragraph for one track, but Divisi's rendition of Stay, with solo and arrangement by Andy Degan is deserving of such mention. The arrangement infuses a subtle doo-wop feel with its syllables and features excellent chord voicing and a smooth modulation through the climax. His solo takes the original embellishments into account and brings new life to them with a strong mix that still captures the song's tenderness without becoming too showy. Stay belongs in the same conversation as notable all-male Sara Bareilles covers like Breathe Again by The Statesmen and Brave by BYU Vocal Point, and will be on my list of favorites for the foreseeable future.

Park & Ride is not universally effective or memorable, but there is a lot to appreciate about Divisi's diverse body of work. There is something new to enjoy with each listen, and the group's efforts shine through each arrangement. The entire album is definitely worth a listen, after which you can pick out a few favorites to play reguarly, perhaps even on your next park and ride.

Park & Ride is a fairly strong collection of songs, some of which fall just short of the mark. Divisi, an all-male group from CCSU, obviously features a well-rounded group, with some notable performances appearing both from the soloists and the arrangers.

An interesting thing about Park & Ride is that so many aspects are even across the album, and yet the quality of tracks can vary pretty widely. Indeed, the songs have many things in common: soloists make a good showing across the board, the mixing is consistent along with most of the arranging, and the group has a lot of energy. The issue is that on some tracks the "same" things just don't work as well as they did somewhere else.

The album is bookended by two of the most successful tracks, Ain't Nothing Wrong With That and Boyz II Men's Thank You. These are great examples of times where everything really works together. The mixing on the album (provided largely by The Vocal Company with two tracks by Nick Girard) is generally homogeneous, tending towards a slightly electric quality. On these opening/closing tracks, this really fits the song choices and the style of the arrangement. The same goes for Runaway Baby and Ships in the Night. On some songs, though, like All of Me or Stay, a softer, more natural sound might have worked better.

Other recurring features include the use of hocketed, arpeggiated backs. Group member Andy Degan, who arranged many of the tracks on the album, uses these in a number of songs, sometimes to huge effect (the broken-up "I just want to thank you" line in Thank You, for example), and sometimes as an obvious stylistic fit (Home). Other times, like in All of Me, I found them distracting from the feel of the song.

The only tracks that didn't work for me at all were the two mash-ups: What Goes Around/Cry Me a River and Too Close (which veers into both Radioactive and Titanium at the end, although neither are mentioned in the liner notes). The Justin Timberlake mash-up starts out okay, but then suddenly takes a sharp turn into what I call the "kazoo-and-grunting" Cry Me A River segment. Similarly, I enjoy the beginning of Too Close, but don't really understand the decision to suddenly switch tracks into two other songs. The change feels jarring, and I can't find a clear reason to switch into the new songs.

Overall, Divisi showcases a lot of potential here. The group clearly attempts to leave its own mark on these songs, which is always great to see, especially from scholastic groups. Though I think Divisi would benefit from really focusing on each song individually. While I appreciate the cohesive feel across the album, it simply doesn't work as effectively for some tracks. Perhaps in the future those tracks should either be dropped until a later album, or replaced with songs that will fit better in the mix.