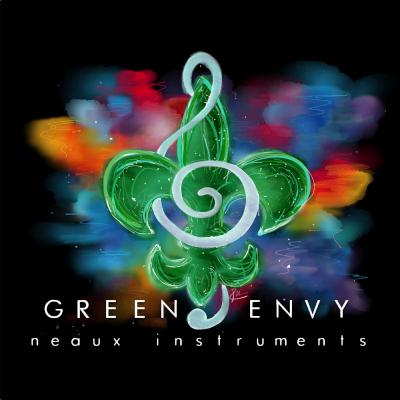 Twenty years ago, Neaux Instruments by Tulane University's co-ed group Green Envy would have been an album I'd have worn out in my crappy little Discman held together with duct tape. Now, with the bar set so high, it falls short.

The arrangements range from mediocre to decent. The value of high hats, cymbals, and other high frequency percussion sounds to fill out the soundscape is vastly underestimated. The vocals are bright and reminiscent of a show choir. But all these things combined could still come together to make a really strong album if the production elements were in place to support them. Don't get me wrong, I respect a cappella purists; but Neaux Instruments has a small handful of studio tricks to enhance moments here and there but leaves everything else bare, creating a hollow quality to the mix. I'm not suggesting full-on distortion, but using compression, thickening the bassline, and adding layers to the percussion to create a more crisp version of what happens live can go a long way to making an average track pop.

Green Envy's bright, pure sound is best showcased in the group's version of Come On Over. It's the first track where I feel like everything is in alignment. There's also a fantastic moment near the end of Honeymoon Avenue in which at least three parts begin layering various siren sounds. I wish there was more of that sense of play throughout the album. Many tracks, including Honeymoon Avenue, Come On Talk, and If I Loved You, among others, go on too long without much variety. I once heard someone say "the second verse is where arrangements go to die." I think that can also apply to outros.

Geronimo and Rather Be are the two tracks I have the most mixed feelings about. The energy is infectious, but hearing "Geronimo oh oh" over and over in the former and nonsense syllables like "din da de-oh" in the latter is distracting and takes away from the experience. The album concludes with House of the Rising Sun followed by a parody version called House Of The Rising Scott. I'm glad the group chose to pay tribute to its retiring leader and the passing of the torch. That's a very thoughtful and special thing to do. But outside listeners will have zero emotional connection to this track. All this track does is make me feel excluded, like standing by while old friends talk about the good ol' days that you weren't a part of. It's a very sour feeling to be left with at the end of the album.

Green Envy is clearly a talented group. The blend and energy are exactly what I look for. Neaux Instruments is not the ideal representation of what I believe the group's true potential is. Taking that extra time to tweak arrangements and making sure the production value is where it needs to be to both represent the group and provide a satisfying experience for the listener should make Green Envy's next release something to make listeners sit up and take notice.

Neaux Instruments is an average a cappella album in an ever evolving and improving landscape. Green Envy has put out an album of good-sounding, nicely-recorded songs, and while it won't blow you away with complex arrangements or innovative production value, you can tell that these are songs the group loves performing.

There are some good ideas on the album, like when Stay With Me starts with the guys building out the harmonies bit by bit with the ladies holding out the background chords. But there are an equal number of ideas that don't work out, even when they were done with good intentions, such as when the sopranos start the second verse of Stay With Me and it is more screechy than sweet, or at the end of Honeymoon Avenue when the "wee-oo-wee-oo" is annoying enough that it distracts you from the build.

With that, one of the biggest areas the group can work more on is its blend. Too often, the parts aren't fitting together and too much is sticking out. The arrangers in Green Envy should be considering how all of the parts will fit together, especially high soprano parts, where you're most likely to stand out when you shouldn't. Crafting arrangements in a way that makes blending easier will result in a more positive listening experience.

I have to say great job to Andrew Weitz and Jake Sussman, who stand out as the two to slay their solos on Come On Talk and Come On Over, respectively. Mr. Sussman, especially, brings a ton of soul and sass to his performance that you know he's channeling his inner Xtina. If you're only going to listen to one song, make it Come On Over.

Neaux Instruments is a project the group should be proud of, but there's a lot of work to be done if Green Envy wants to take its sound to the next level.

Looking at the track list that Tulane University's Green Envy has put out on its third album and seeing tracks such as Geronimo, Rather Be, and C'mon Talk, I expected to hear a high energy album from top to bottom. However, from start to finish, Green Envy's Neaux Instruments never seem to find the right balance across all parts.

I always stress that the first track sets the tone for the entire album moving forward, and Green Envy's rendition of Honeymoon Avenue doesn't pack the punch that I'm looking for in a first track. The soloist, Ani Carlson, tries to set the tone and energy level for the entire group, and delivers a very impassioned performance, although I do think that it was a little strained in parts where there were tough octave jumps. In contrast, however, the background vocals are not really close in meeting her energy level. Even if you are just singing a sustained "aah" vowel for a series of measures, like the top voice parts are doing in the first chorus alone with Ani, it's imperative that the vowel has a sense of direction and purpose in moving the arrangement along. Instead, what we get is a background vocal that is flat and uninviting, offering the soloist little support until almost the very end of the song. Not to sound blunt, but it does not appear that the group really likes performing this track, and are just going through the motions. There were also a number of moments where there were intonation and pitch issues that made me pause.

In many of the other tracks, I notice a significant balance issue between the vocal parts and the vocal percussion. The vocal percussion is simply too loud in many of the tracks and sometimes doesn't fit the feel and tempo of the track. Stay With Me, for instance, is supposed to be a heartfelt ballad which the vocal parts perform really well — I love the idea of passing the solo in between the different voice parts, rather than just one person taking the lead, and each part really shines through on their little "solos". But, the vocal percussion conflicts with the mood the group is trying to convey, especially in the final chorus where I would argue that a lot of the lip/tongue rolls and snare hits are just simply not needed and distract me from the vocals. In If I Loved You, which is one of my favorite tracks on the album with a powerful solo from Piper Browne and a strong background that really pays attention to dynamics and the passion in the lyric, the vocal percussion takes over the track on the final chorus and swallows all of the background vocals — that alone prevents me from giving the track anything higher than a "3". Vocal percussion is like a really powerful spice to a dish, like a cayenne powder — you add the right amount, and it gives it that extra kick that makes a good dish great. Add too much, and it overpowers everything else going on. In these two tracks specifically, there is simply too much vocal percussion to really enjoy all of the other components in the track.

My final note for Green Envy is to be a little more careful of the spelling of song titles and artists in the liner notes — Come On Talk should be written as C'mon Talk by Bernhoft. As the group moves forward, Green Envy needs to focus on the balance of their arrangements more — what is the overall mood of the song? What do the soloist and background vocals need to do to make sure that mood is conveyed? How does the vocal percussion play into that; does it take a more focal role, or is more of a subtle piece to the track? A track like Come On Over is a perfect example of that balance really working well from top to bottom — an energetic and consistent background vocals along with an appropriate and not overpowering vocal percussion that all support Jake Sussman's great solo (way to navigate your chest voice and falsetto on such a tough song!). If their next album features more tracks like this one, then Green Envy will be a force to be reckoned with.

To purchase a hard copy of the CD and have it mailed to you, email grenvyprez@tulane.edu.