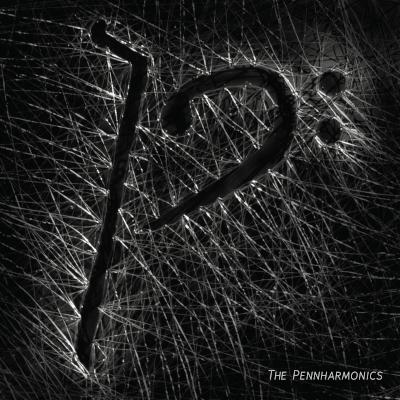 I have a few title suggestions for this EP from The Pennharmonics. While The Penns is adequate, you could also call this release: Holy Crap!!! (with three exclamation points); A Hard One to Top; or perhaps the more artful Teardrops & Speaker Explosions.

The Pennharmonics are masters at making the most of each measure, never ignoring the chance for a dynamic swell or fade, precision blending even on the widest of vowels, or an opening to manipulate the intensity through stylistic or volume choices. These songs aren't simply a good lead atop a nice arrangement; absolutely everyone present is locked in to popping great arrangements right off the page and into the listener's heart.

And here's the real, surreal anomaly: each new track is even stronger than the previous track.

We're engaged immediately with the street stylings of Freedom, enjoying a bass on the lead who can mix registers with the best of 'em. What You Don't Do so audibly demonstrates making the most of each measure, which prevents the common collegiate stagnanation from even pushing a toe toward the listener. There's a huge gospel sound and marvelous swing feel, and lead Erin Vrana goes for the earth's outer atmospheric layer with her all-hail scream-belt. But wait until you hear the amazingly snug harmonies from duettists Ryan Coleman and Jilian Keller in Streetlights, made even more amazing with a cool, complex vocal trumpet that essentially turns the piece into a trio. The recording studio must have been a splash zone after the crisp and percussive diction spat out in Forgiven, where we're treated to more enormous sounds, and a thumpy, raw, booming framework for spectacular soloist Jon Sommerer. Finally, we get a theatrical, goosebump-causing experience from Burning House, leaving us emotionally spent by the final notes at the EP's close.

Somewhere after the notes fall away and the silence starts, you'll either say "Amen" or play the EP over again.

The Penns is really a vocal show, one high intensity experience to savor, study, and love. Do I wish for more song choice variety? Not really, because the vocal execution and all-out commitment is so stunning. Do I think the fireworks production could have pulled back at times to present something unexpected and intimate? Absolutely. But The Pennharmonics found something to beautifully scream about, and I'll take this delivery just as it is.

The Pennharmonics are back at it with their five-track EP, The Penns. And following in the footsetps of its previous release, Black Cloud Silver Lining, the group gets a lot of the same things right: song selection, solo assignment, and album cohesiveness.

Especially from collegiate groups, we tend to see a lot of the same songs done over and over. It's always a breath of fresh air to hear some less-expected numbers, and The Pennharmonics have put together a nice selection of hits from Allen Stone, Lianne La Halvas, Bernhoft, and more. Incredible artists, although they may not get the same radio time as the T. Swifts and Adeles of the world. Avoiding overdone songs, though, is only half the challenge; the other part lies in picking songs that really highlight the group's soloists.

Here, The Pennharmonics succeed as well. Daniel Zambanini (Freedom) and Erin Vrana (What You Don't Do) start the album off strong, and Olivia Jones brings it home on Burning House. None of the leads on The Penns overreach their abilities or get too lost in unnecessary frills. These are solid, convincing performances bolstered by excellent mixing from Five Spice Records.

One thing I would love to hear more of from The Pennharmonics is the same depth that the soloists display present in all of the backs. To me, the emotional range of the group as a whole falls in and out across the album. What You Don't Do has some nice moments, as does Forgiven, but some of the earlier songs either don't carry a lot of the same weight, or are less consistent in that area. I encourage The Pennharmonics to focus on this area in future albums, which would help to round out the strength of the group.

I always enjoy the shortened format of EPs, which really allows groups to prop up their strongest performances, and it allows for a similar feel to songs across the board. On a longer album, the similar tones of these songs might start to drag a bit, but The Penns is short enough that I think the group gets away with it here. This is another strong showing from The Pennharmonics, and by continuing to build on their strengths, they are setting themselves up for more and more success to come.

I'm always hesitant about EPs. EPs are a great way to give a snapshot of a group. However, there's minimal depth to the presentation, and it's hard to share a full range of emotions in such a small number of tracks. The Penns is no different. Even though I have a very good idea of who The Pennharmonics are on the surface, I have no idea of what lies just underneath, and that hurts the overall value of this album. The Penns is an album with very strong face value, but the minimal variances in style create a monochromatic presentation.

The first thing that jumps out about this EP is how powerful The Pennharmonics are. The power is on par with groups such as the Nor'easters and The House Jacks. The first chords are beckoning the listener to come close, and then the music reaches though the speakers to grab the listener by the lapel and refuses to let go until the last chord. The Pennharmonics are just absolutely brimming with energy. Every member is focused on every second of the album, and I love it. Add in some top-notch soloists, like Daniel Zambanini on Freedom and Jon Sommerer on Forgiven, and this album is almost destined to be a contender for a good number of compilation albums and a must-have EP for anyone's personal collection.

There's only one problem I've found with this album. Remember how I said this album grabs the listener by the lapel and never lets go? Well, there's the problem. There's very few emotional dynamics on this album. The only song that shows a vulnerable or sensative side is Burning House, the last track of the EP. Don't get me wrong, Stephanie Allen and Andrew Colosimo wrote what I believe to be the best arrangement of the album, and Olivia Jones is an amazing soloist, but this track is the equivalent of putting a band-aid on a wound that requires stitches. It is too little too late. The EP is so commited to the power that another track is needed to show the more vulnerable side of the group.

In summation, The Pennharmonics released an EP that is so powerful, the only way to give a better presentation is to add more songs to the EP. The full array of emotions are not addressed thoroughly, and without the full array of emotions, the EP is incomplete. The Pennharmonics have established that they have all the capabilites to be a powerhouse group, but without the vulnerable emotions, they have one more hurdle to jump before achieving excellence.

The Penns also streams on Spotify.