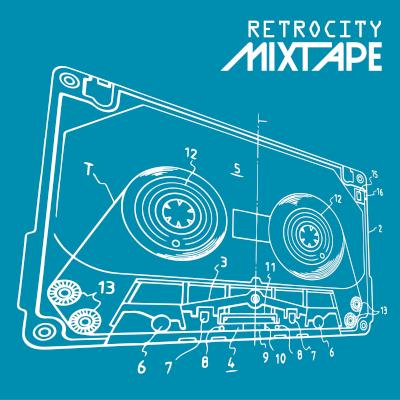 One of my favorite phrases to hear is "those of a certain age". I didn't really get the nuance behind the phrase until listening to Retrocity's debut album Mixtape. Everyone will have a moment or two of pure pleasure while listening to this album. But those of you of a certain age will get additional enjoyment from this album of '80s classics as you reminiscence about Friday nights at the skating rink, Saturday afternoon at the arcade, and that Sunday night The Wonderful World of Disney movie that played before the school week started over again. Those are the memories (good and bad) that Retrocity conjures with its Canadian charm and charisma on this release. And for the most part it is a bomb diggity, totally tubular and gnarly to the max achievement.

Retrocity is a co-ed octet of professional musicians that only performs songs from the '80s. And this album is a veritable mixtape of some of the most popular and avant-garde earworms from that decade. Artists as diverse as Kate Bush, George Michael, Hall & Oates, Queen, INXS, Murray Head (yes, Gilles from Buffy's real life brother), John Farnham, and The Police all appear on this one album. It's like a Totally '80s a cappella compilation, and after multiple listens I'm in heaven. Though I will admit that it took me a while to warm up to several of the tracks such as Cloudbusting, Killer Queen, and Never Surrender, now there's not a one on the album that I wouldn't listen to at least once a week.

Opening with GOWAN's (You're A) Strange Animal is a mixed bag. I wasn't familiar with the original at all, which is a strange thing for me to say in and of itself, so I wasn't as immediately captured by it as an opener. It can be a little screechy and shouty at times, but overall it's a good listen and augurs well as to what follows. I actually saw INXS in concert in Paris, so the smiles that hit when hearing the beginning motif of Need You Tonight were astronomical. And after playing a pimp in Chess, hearing the rap singing of Dylan Bell in One Night In Bangkok does indeed excite me. Father Figure here is one of the best versions of the song that I've heard (nearly equaling that of The UNC Clef Hangers from 2002). All hail Daniel Galessiere. He is a gift. And then there's You're The Voice with guest appearances by The Swingles (because Retrocity's got it like that), with stunning solos by Oliver Griffiths and another commanding turn by Galessiere. I am in love.

There are some moments on the album where the blend isn't what I would expect from such a high caliber group. Sometimes the voices seem to be reaching just outside that comfortable range on solos. The "brrrr nerrr" arrangements harken back to times that would best be left forgotten. And the production should have been experimented with a little more. But overall, if you are looking for a bit of nostalgia handled with absolute aplomp by stellar musicians, this is one Mixtape that you don't want to miss.

You know when you're driving together with friends and a great '80s song comes on the radio, and everyone freaks out and sings really, really loudly and enthusiastically, because you're overcome with nostalgia and excitement? Or perhaps this has happened to you alone, without friends, and people have stared. There might even be car choreography; heck even the tender ballads were Volume 11 back then, so that'd be proper. You'll get that experience from a few songs here, but we're missing that Crazily Enthusiastic '80s vibe for too-much of the aptly named Mixtape. This album is full of glorious source material, but fails to kick up a sustained joyful noise that makes you want to sing along to the era of crimped hair and neon from start to finish.

It's pretty cool that Canada's Retrocity has dedicated itself to covering '80s hits though, because what a well to dip into. You can cover the groups who pumped out a lot of hits, or just the one-hit-wonders, or the uncovered gems, and they'll all be over-the-top in some manner, with plenty of wild sound effects and electronic instruments to mimic. In short: timeless fun! But it's really the mimic factor here that makes or breaks these tracks for Retrocity. Need You Tonight is a near carbon copy of the original, which is cool to pull off, but we've also been listening to this song for about thirty years, so yep, we've got everything down. Also, sometimes the precision lifting means lifting an original that was too repetitious — (You're A) Strange Animal — or long —  Father Figure —  in the first go-around by its original artist, and could have benefited from some creative editing here. Sometimes replicating can be downright dangerous, as the solo in Never Surrender is firmly out of the lead's lower range and, if not reassigned, could have been transposed. But, One Night In Bangkok is equally literal, and there's something in that doubled-chorus that hits you right in the happy place and won't let go (my new guilty pleasure of a guilty pleasure). Speaking of all of these iconic works, my download file did not include the songwriter credits. And if you're going for such exact replicas to capture an era gone by, that's pretty necessary.

While imitations are fun to perform, it's a more refined interpretation that brings something special to the listeners. Most notably, Rise Up / At The Feet Of the Moon is quite sophisticated in its arrangement presentation, with a beautifully skilled lead adding depth to the music. The awesome guest choir filling out You're The Voice is great too, and provided by a cappella cult-status group The Swingles. I would like to hear all of this pushed even further the next go-around; true re-imaginations of songs we can sing in our sleep. That'll get us wearing hot pink!

Listening to Retrocity's Mixtape feels like going back in time. Sit tight folks because this Mixtape takes you back to the 1980s with twelve perfectly crafted tracks, from the overall sound quality down to studio effects. This Canadian group digs deep into the core of retro music that the Generation X kids have loved during their time growing up.

It's difficult to choose a favorite track on this album. The arrangements are aptly designed to preserve the sound of retro music. In most of the tracks, the solos are divine. The perfect execution of frequent arpeggios trigger OCD satisfaction from me. The only familiar track for someone born in the late 80s (like myself) is One Night In Bangkok. This was my childhood favorite and somehow it sounds just the same as I remember. Father Figure haunted me subconsciously for at least a week after listening. The repetitive rhythm is so addictive that one needs rehabilitation afterwards. It goes the same with the rest of the tracks — always something to like. And I swear that Rise Up / At The Feet Of The Moon feels like a Gloria Estefan song ("sha dap bop boop boo doo yeah" gives it away).

The collaborative track You're The Voice did not require The Swingles's glass-breaking high sopranos but Oliver Griffiths' solo slays. This track could stand alone as a single release. I had never even heard the original song by John Farnham (which was also revived by several artists like Heart and David Foster). It is a perfect exit song after the nostalgic line-up that preceeded, leaving us with a happy major chord memory of Mixtape.

There is not a lot to be critical about for Retrocity. Maybe one RARB category "Innovation / Creativity", which for me is not a big deal in this compilation, because this is a collection of vintage art that doesn't require much reinvention. For a cappella fans who want to revisit the golden past, buy this album.