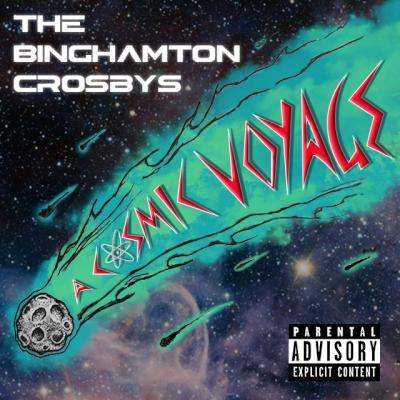 This album really is A Cosmic Voyage: you'll sing along with the stars, and laugh yourself to the moon. That is, if the guys are singing their uptempo party hits.

Clear the celestial pool, because the Crosbys open with a total cannonball of bombastic singing for Who Are You. Soloist Pat Regan possibly ripped his shirt open and thumped his chest after he finished his three and a half minutes of growling scream-singing. Also not to be missed, Animal the Muppet on drums (the vocal percussion is not credited, so I have to assume all those crazy beats were done by this guest). But, a dividing point: can you handle saucy, sometimes off-color, sometimes juvenile, sometimes profane background licks and soloist lyrics that definitely, most certainly don't appear in the original? Because you'll get a lot on A Cosmic Voyage. Sometimes the custom words are softer, more comedic. The iconic run that opens Are You Gonna Be My Girl? Get ready for an unexpected shake-up. This word play plus full-throttle singing is like (now defunct) Da Vinici's Notebook and high-energy Ball in the House got together and out came the Crosbys with their jazz hands shaking.

There's bursts of wonderful vocal musicianship on display, too. Enjoy the scale-running bass on September. Further enjoy the smoky and deliciously lush solo Nick Tenore drums up to front Time of the Season, yowza. And how about the awesome group effort that dazzles the atmosphere for Shining Star? But really, I think the best vocal achievement here is singing hard and loud and still sounding so tight and focused. That's great. Lots of groups can't do this. Lots of solo artists can't do this, either.

In contrast, slower songs are a weakness for the Crosbys. Definitely missing from this album: a poignant pop-rock all-male ballad, a signature for most collegiate male groups. And that's okay, but focusing on the down-tempo songs that were included here, they're just not as tight and convincing as the fast numbers. I Love You (For Sentimental Reasons) is a bit barbershop, a bit crooner, and a bit strange with its almost too-mellow execution that sounds like the group is half-trying. And even with a distinct tempo change mid-song, God Only Knows is still lethargic and frankly, pretty dull. The Crosbys definitely have their wheelhouse.

My recommendation: buy the fast and wild first two tracks and go nuts with joy.

When I first started writing for RARB, the Binghamton Crosbys' 2014 album To Honor was one of my first reviews. I commented that, while talented, the group spent too much time being silly instead of focusing on the musical elements that would have made for a fine experience. Listening to A Cosmic Voyage, I feel like they may have listened to a freshman reviewer pretty intensely.

There are not as many of the silly rewrites on A Cosmic Voyage that I've come to accept as the Crosbys' calling card. They're there, but there are tracks without the banter entirely (though there is still a: "I am a Crosby, would you like to do me?" joke ... I guess some things never change). But they've channeled a lot of that energy into their musicality instead! The chords are clean and crisp, the arrangments have gained some originality beyond the words, and the singers are listening to each other so well. The dynamics are so much cleaner than they were on To Honor as well, making a much more complete product. A perfect blending of all these successes and their signature style comes late in Shining Star: there's a beautiful chord structure over the underlying lyrics of "what's that smell?" Even as I chuckled, I was incredibly impressed with how far these guys have come.

The stars are the soloists — they sound so present and connected in every track, an absolute rarity in this day and age of production. I am a little afraid for the opening tracks' soloist; he sounds like he may be hammering too hard on his vocal cords, and he's got the kind of voice I'd like to preserve for the future.

There are no real stand-out tracks, but this product as a whole deserves a "5". It executes perfectly the best parts of early 2000's a cappella recording and production. The percussion is real and human. The voices are distinguishable and present. The dynamics are human. The soloists aren't flattened. Everything pops and clicks. My only qualm with the product is that it lacks being on the edge: it perfectly executes all of the things a top album would need to nail ten years ago. But, maybe just because I thrive on the nostalgia of music, I've frequently wished that newer albums relied more on some of these styles and recording techniques.

Keep it up guys; the next level is in your grasp.

A Cosmic Voyage really has me torn. On the one hand, the Binghamton Crosbys have delivered a collection of classic songs sung with high energy and fun which comes through on every track. However, the delivery of most of the tracks and the lyric liberties that the group takes on each song makes me wonder what's most important in their arrangements.

For those listeners who love music from the '70s and '80s, this album will definitely make you excited — Earth Wind & Fire, the Zombies, and the Beach Boys are just a few of the artists that the Binghamton Crosbys cover on A Cosmic Voyage. Kris Siriban delivers a smooth solo on Earth Wind & Fire's September, showcasing his great range and falsetto in the chorus. The background vocals are well balanced and match the energy that Siriban delivers in his solo, although I wish they were just a tad softer throughout the track (especially in the final chorus). Combine that with a great arrangement from Johanna Vinson, and this track is without a doubt my favorite track on the album. The album as a whole is pretty minimalist in that there is not a whole of lot of fancy production work on the tracks, giving the album a more natural, almost "live-recording" feel to it, which I think was the way to go with this release. And as I mentioned earlier, these guys really sound like they are having fun on each and every track — I'm imagining that their live shows are quite entertaining, and I hope to see them live soon!

That being said, most of the tracks are sung in the mezzo-forte/forte range and never come down from that level. So, while I appreciate the energy that these guys have, the group needs to provide the listener with more dynamic contrast — energized singing does not mean loud singing all the time. You can still be energized and focused at a pianissimo dynamic level, giving the album another layer of depth for the listener. Since the Binghamton Crosbys missed this, a lot of the songs start to blend together after a while. In addition to dynamic contrast, I personally wish that they added a couple more "modern" songs, if anything to break up the album and provide the listener with a different feel.

The biggest critique that I have, however, is the group's lyric choices. On certain tracks, the group takes the time to add some "nonsense" lyrics to different sections of the track — be it in the background vocals, transitions, or even at the start of songs. While I am okay with these types of additions to songs normally, the frequency and placement of the lyrics is quite excessive on this album. The biggest culprit of this is Jet's Are You Gonna Be My Girl, where the nonsense lyrics start right off the bat with "Dim Dim Dow, Dim Dow I got your nose, Dim Dim Dow, Dim Dow where's your nose ... can you tell me where did my nose go?" Additions to the lyrics continue throughout the entire track, causing the practice to quickly lose its "charm". Unfortunately, this is not the only track that is guilty of this — most of the tracks have a number of nonsense lyrics throughout, and it distracts from the soloist as listeners try to determine what was said. In fact, most of the album seems to be one big inside joke: the group thinks the lyrics are funny, and we have no idea why. Maybe the lyrics make more sense in a live performance where you are able to see how the group is interacting on stage with those lyrics, but it simply does not come through in the recorded medium.

Moving forward, I sincerely hope that the Binghamton Crosby's focus a little less on the nonsense lyrics and more on the overall musicality of each track (arrangement creativity, dynamics). If they do that, I think they'll get a more balanced album that will be funny, creative, and something that I'll want to listen to over and over again.