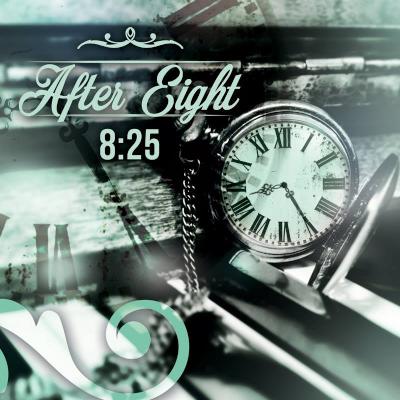 After Eight is the official a cappella subset of the all-female Cornell University Chorus. The barrier entry to this group is high, with two separate auditions, first to join the chorus, then to join After Eight. Accordingly, these women are skilled singers with exemplary blend, tight chords, and round tones. April Come She Will showcases After Eight's lovely blend and range particularly well, and is the best (and unsurprisingly the most choral) of the pieces on 8:25.

The group executes solid yet stolid arrangements of moderately upbeat covers with precision. The production is light, allowing the voices behind the microphones to be heard without distortion or studio effects. The overall result is a pleasant but unfortunately nondescript listen.

There is a surprising lack of dynamics throughout. They seem to hover around mezzo forte, and while every word is articulated and the cutoffs are clean, there is no impact. The climax of Storm Comin', with stomps and claps, is more of a fizzle. The soloists have uniformly pretty voices, and though they mostly break free from the standards of choral singing, there are errant vibratos (In the Next Room), obvious transitions between chest and head voice (Titanium), and moments that sound forced (in Levels, Drink You Away, and You Go Down Smooth).

With 8:25, After Eight has delivered a good listen. If the group plays to its strengths, the next album could be great.

After Eight still sounds pretty and well-rehearsed, but these women come up short on energetic confidence and sizzle on 8:25.

The soft, gentle, and warm delivery for most of After Eight's selected repertoire is a bit off, right from the start. The backgrounds in Telephone need way more grit and spit and hard diction to pop this female empowerment song off the score. Sleepy and under-tempo, Storm Comin' doesn't translate well to a heavy spiritual that should drip with power; the same underwhelming vibe hampers the slowed-down version of Crazy in Love, where high-energy should absolutely slay, even if it is a reinterpretation. At times on this release, After Eight struggles to capture the right mood and feel for their music.

The production doesn't always help fill in the gaps. Universally here, the backgrounds are too loud, sometimes even louder than the leads. This is a particular problem on gentler works like Last Love Song, which is such a pleading, hurts-so-good piece where the lead really should have her own sonic space to tell the story, but all of the individual lines are turned up too high and largely remain at the same level, too. It would have been nice to create a vocal tapestry where individual lines get the spotlight from time to time in the background as the lead line floats above. We also get too much too often: too much reverb, too much digital tuning, too much bass boost. The album has a stapled-together kind of sound, instead of a smooth and creamy sound. But, it's also hard to find the sonic sweet spot if the voices aren't delivering the right intensity.

Arrangements are not particularly engaging, either. The ballads tend to work adequately, but edgier Titanium has a strange construction, and You Go Down Smooth has a hyper-repetitive "bop bop bop!" background. Both refinement and creativity could use more focus on 8:25.

Lastly for my critiques, I'd like to see songwriters credited in the liners instead of "OPB". While this is a requisite I have for all groups, it's particularly disappointing for a group with a strong academic tie-in (these are musicians from Cornell's esteemed University Chorus).

On the improvement front, the soloists seem stronger than the last few releases from After Eight, but with the production balance kind of burying them, it's hard to really connect to any one lead. Yet I'm hopeful that the long and harmonious history of After Eight will swing the recording pendulum back over time.

After running through the album 8:25 a few times I managed to glean a good sense of where After Eight's strengths lie. One thing that struck me immediately is the group's strong choral sound. Storm Comin', Before It Breaks, and April Come She Will best illustrate this. The well-shaped vowel sounds, clean diction, and purity of tones throughout these songs are prime ingredients for great, blended group singing. I aprreciate Storm Comin' in particular as a nice diversion from the more standard solo-driven numbers while adding subtle call-and-response-like group elements to the repertoire.

While I really like the unified choral sound on this album, I can also sense an inability to "loosen the collar" on certain songs where the key points of emphasis lie less in getting every note perfect, and more in the embodiment of the performance. The first song Telephone is one example. The intro is bright and dynamic, but once the dance beat drops in behind, the song starts to feel wooden and stiff. It sounds less like the dance party it should be and a bit more like an exercise or composition. I felt similarly about Crazy in Love. I can appreciate the risk in opting for the alternative, slowed 50 Shades-esque interpretation, but I never feel completely invested. There's a kind of subdued delivery, which generally works for the style chosen here, but it lacks the subtle undertones of tension, angst, or grit that could sell the performance better.

My favorite song on 8:25 is definitely Last Love Song. The solo is soft-spoken but has a rich candidness that fits the mood perfectly. I appreciate how the arrangement is molded in the group's image, avoiding sheer replication of each and every instrument and emphasizing a more unified group sound instead.

In the end, scoring 8:25 proved to be challenging. As with most music there isn't necessarily a neat and tidy label to describe it. While I generally enjoy much of what I heard on the album, not everything speaks to me and commands a place in the echelon of "4"s and "5"s. While a lot of the key ingredients are here, After Eight needs more consistent conviction to put it at the top.