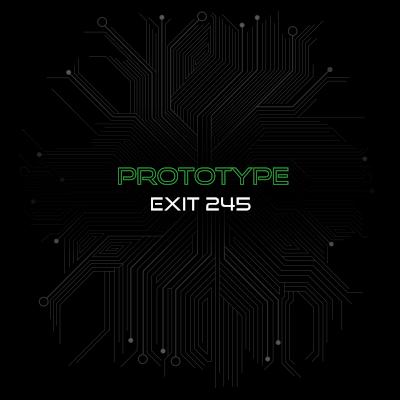 The thing about Exit 245 is that the group's work is always so darned enjoyable. Whether it's a full-length album, an EP, a standalone single, or a Christmas release, the group knows how to put together a pleasing recording. That kind of marketable range and consistency is pretty awesome, especially considering the strengths within different eras of Exit 245; buy and enjoy with confidence across Exit 245's full catalog.

As for Prototype, this collection is largely good with bursts of profound excellence. Fear left an enormous impact on me as a single, and it starts out this EP on just the right tone. In fact I'd love a whole release of this more rustic sound and material, because it comes across as more sophisticated and organic than CAN'T STOP THE FEELING! which needs a bit of editorial work. We really don't need simplistic syllable patterns like "bop bop bop!"s and other elementary accents that take away from the suaveness of Exit 245 and the fun of this lead's controlled and cool falsetto work. Chosen vocal accents seems rather minute to point out, but when a group is teetering on becoming amazing, and I think Exit 245 is, it's a reminder to leave no stone unturned to improve one's work and position oneself as incomparable. And almost always, the difference between good and excellent for a musically solid group is in the final arrangement editing. Sweet Annie could also use editorial work, this time to put a little more in instead of removing excess. The choruses are so tenderhearted with a pleading soloist and rich supporting harmonies, but the open verses don't carry the same charms for this country gem.

But my, how we quickly swing back up into excellence with the All Time Low / Guillotine mashup from arrangers Sam Mayman and Sean O'Brien. Both charts translate so gracefully and perfectly to a cappella individually and meld together wonderfully well. Exit 245 delivers its totally captivating version with sex appeal and a challenging score that gives the performers and the listeners a lot to dig into. I especially love the risky wide octave splits in the Guillotine section. Let It Go is also a great listen with another pleading lead that pulls you in and keeps you close; he sounds genuinely heartbroken with genuine urgency. We also get to hear more of the high tenors of Exit 245 highlighted in the background of Let It Go; the high tenors of Exit 245 being a total delight.

Disturbed's modern The Sound Of Silence pops up on Prototype, which is a really awesome cover from Disturbed, but not a cover of a cover I'd expect Exit 245 to take on given the other material on this release and releases of yore. The group's effort is beautifully dark; it's not as effective as Disturbed's grandiose and intense spin, but giving Exit 245's crazy-low bass a chance to shine is not without appreciation. Lastly, Prototype concludes with a high-octane version of Drag Me Down that doubles down on the limits of acceptable "a cappella" dubstep action; there's a lot of engineering construction here to light the fireworks, and it's cool, but again, not really the heart of Prototype and Exit 245.

Prototype will fit snugly into your collegiate a cappella collection with a dash of this and a dash of that, from a seasoned group that keeps the good work coming.

In my last review for Exit 245, 2015's The Way Out, I encouraged the group to stretch a bit more and to strive for more than just decent vocal covers of radio hits. I have similar feedback for the group's latest album, Prototype. There are some nice moments here and there, and a track or two that has more substance, but ultimately the majority of it just feels kind of half-hearted.

I've heard a lot of Exit 245 in the past, and I know that heart is something the group is capable of bringing to its recordings, so it's disappointing to see so little of it here. The worst offender on the album is CAN'T STOP THE FEELING!. Not only should it be firmly in the group's wheelhouse, but the best I could come up with to describe the backing vocals is that they just drag. Even a spirited solo by Leif Jomuad isn't enough to revive it, and the song as a whole just lacks enough of a spark to carry it. The same issues show up to one extent or another on a number of the tracks. Sweet Annie and Let It Go have similarly solid leads, but poor syllabic choices and drudgy backs hold both songs back.

The more successful numbers have a little more polish and shine to them. I'm a huge Jon Bellion fan, so it's nice to see an a cappella rendition of some of his songs in the All Time Low / Guillotine mash-up. Musically, I think it works nicely — Sam Mayman and Sean O'Brien do a nice job weaving the two songs together in the arrangement, and the mixing from James Gammon Productions is excellent. My only complaint is that Jon Bellion is a storyteller; his songs have distinct messages, and the two songs chosen here are somewhat at odds with each other in that regard. All Time Low, ultimately, is break-up song: a song about losing someone, about trying to take the broken pieces of yourself and taping them back together into some semblance of a whole. Guillotine, on the other hand, presents a confident voice, able to poke fun at itself because of the secure love felt despite flaws. Lyrically, both messages get muddled when combined this way.

While The Sound Of Silence kind of grows from a "3" to a "4" by the end, Drag Me Down is where I think the heart of Exit 245 really shows, finally. It's slick, it's fun, it's easily the best track on the album. Whatever happened in this recording is what Exit 245 needs to focus on capturing more of in the future. That doesn't necessarily mean that the group should only do electro-dance-pop pieces; in fact, I think these singers really have more to offer than that. They clearly have the vocal chops, as a number of tracks feature really strong leads (Sam Valentine on Sweet Annie stands out, as does Skyler Rubin and Zac Mantlo on the Jon Bellion mash-up). The group just needs to figure out how to connect the message it wants to convey, the emotional space of the song, and the syllabic choices to each other. If those things were working hand in hand, I think these tracks would resonate more with listeners.

According to the folks at Oxford Dictionary, a prototype is "a first or preliminary version of a device or vehicle from which other forms are developed." Naming an album after this concept, which brags about being the first to do something, is a fairly bold statement and sets the bar quite high. While I can't say definitively that Exit 245 is the first to tackle these tracks in the way that they did, it's definitely a unique a cappella album that offers insight into what the future of a cappella may hold.

Take Drag Me Down from the Zayn-less One Direction as a perfect example of this. I hadn't looked at the track list very closely before making my first pass of this album, and Exit 245 starts the track very different from One Direction, so I couldn't figure out what song the group was actually covering at first. Exit 245's start is very dark and haunting, especially with the strong, resonant, sustained "ahh" in the bassline that left me wondering what song I was listening to. It wasn't until twenty-eight seconds in, when we hear Sean O'Brien gradually come in with the repeated opening line "I've got a fire for a heart" that the song becomes more identifiable. After the first two verses and the first chorus, which feature fun and energetic solos from O'Brien, Shaun Nerney, Joao Versos, and Skyler Rubin, I was lulled into a false sense of "I know what's coming next", only to have the track get turned on its head. Arranger Peter Barber decides to take the listener to the club, giving the track an electronic breakdown that I'm not sure the guys in One Direction ever thought of. The transition is very smooth from the verse to the drop, and the repeated "ja-na-na" in the upper parts, plus the effects and bass line, make it sound as electronic as a cappella could probably be. Well done by Barber for the creativity, and shout out to James Gammon Productions for making Barber's vision become a reality.

Drag Me Down isn't the only track that has an electronic inspiration on the album. The mashup of Jon Bellion's All Time Low and Guillotine is also featured on the album, with a great blending of the two songs by arrangers O'Brien and Sam Mayman. However, unlike Drag Me Down where the electronic vibe is added in and has a prominent role, the arrangement of this track focuses more on the vocals rather than the electronic backgrounds of the originals. The defining moment for me, though, is the ending of the track, as the two tracks are seamlessly woven together into one. With the group being split and singing the respective song's chorus simultaneously, O'Brien and Mayman allow each half to have its own moments to shine and come through before trading with the other, while still keeping a sense of unity. Absolutely spot on from top to bottom.

Not all of the tracks have an electronic inspiration, if that's not your thing. The opening track, Ben Rector's Fear, is absolutely stunning from top to bottom and shows off great range at the very end of the track. The background vocals are right there with the lead, supporting the vocal while providing their own energy and drive throughout with varying rhythms and syllables. But, it's the very beginning, with the staggered and dissonant "fear" across all voice parts that sets the tone for the whole track and really impresses me the most. This is not easy by any means, but Exit 245 makes it sound like a cakewalk. Exit 245 also tackled Disturbed's rendition of Simon and Garfunkel's The Sound Of Silence, which was arranged by fellow RARB reviewer Daniel Westbrook. While the emotion is definitely present in soloists Barber and Hunter Beatty, as well as the background vocals (although I do think they overpowered Beatty in certain points), I feel that this track is missing something. What makes Disturbed's version so powerful is that edge and grit that the lead vocalist puts into the whole track, especially towards the end, and I don't necessarily get that same level of edge from Exit's rendition. Not to say that it isn't nice, however — it just feels like it is missing that one tangible piece to put it on the same level as some of the other tracks here.

My overall message for my review of Exit 245's last album, The Way Out, was that I wanted the group to be more creative in its arrangements rather than just giving us quality replicas of pop tracks. With Prototype, it's clearly evident that Exit 245 produced an album that not only showcases the group's immense talent, but also may have introduced the next popular trends in a cappella.