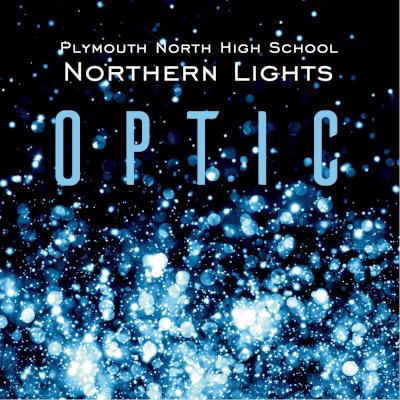 Arrangements run the gamut from seasoned a cappella pros, plus submissions from Northern Lights' own director Dave Grossman. Yet wonderfully enough, it is the arrangement from the student alum who was a mere six months removed from Northern Lights when she penned it that stands out the most. Yes, even with Ben Bram's name credited among the pros contributing, student arranger Casey Quinn's effort on Elastic Heart just stays with me. The rhythms and frequent dissonances are risky, and the engagement level never dips, taking us to funky new places as the measures clip by.

Northern Lights spotlights its talented females frequently; it's definitely a lopsided gender presentation between solo distribution and background work. You won't hear a lead from a male until the album is about halfway over, and even the backgrounds sparkle with a more treble sound. This is all fine and not atypical for high school a cappella — and sometimes I'd want it no other way, like the razor-thin cool female harmonies on The Beast. However, the lack of male prowess is certainly noticeable in the context of the full release.

Consumers of contemporary a cappella expect great intonation, exciting in-the-pocket drumming, and dreamy soundscapes without sounding too synthetic; otherwise, we risk losing the vulnerable, human condition only real vocal music can provide if we go too far. It's a delicate balance to strike — being clean, but still being believably natural enough — and for my preferences, OPTIC ventures into overproduction territory frequently. Universally, the artificially enhanced vocal percussion is often too much, most especially on Higher, the group's special and dazzling collaboration with always awesome Forte from Centerville. The precision vocals from both groups combine wonderfully, but the "drumstick" smacking all over the choruses does nothing to complement the duet; the whole song falls a notch because of the too-wild production on the drums. The score for Beggin' takes a hit because of the distracting drumming as well. Also, the more you fiddle with the vocals, the more you increase the chances of creating new issues while fixing others; there are digital cut remnants left behind throughout OPTIC, but audibly so when the lead first comes in on Hold Back The River. Production is subjective, but my experience as a listener was less inspired in this area than I hoped for.

Also, most of OPTIC is just too darned loud. There's very little volume contrast here, and vocal shouting seems to be a specialty of Northern Lights. Since the musicianship is solid, the group's confident and harmonic cranked-up volume definitely adds excitement, but when it occurs with this frequency instead of exploring the nuances of a range of dynamics and peaking at special times, it also has an overboard feeling. The only real sustained intimacy and softness we get on OPTIC comes from beautiful Colour Me In, with great vocal control and storytelling from Zein Karam. The arrangement weaves together his lead with the backgrounds in a very impactful manner, pushing over lines and swelling at just the right moments.

Lasty, most especially from scholastic groups, we should find all of the original songwriters listed in the credits versus only "OPB". Students should particularly see composers getting their due recognition.

Still, I have no doubt you'll find plenty of merit in OPTIC, a fine release from a very fine high school ensemble.

OPTIC, by Northern Lights from Plymouth North High School, is a shining example of what can happen when you collaborate. Working closely with The Vocal Company, this talented group of kids ended up with an album they can be proud of.

OPTIC features a sound that is just raw and imperfect enough to be edgy, and just clean enough to be marketable. The first element of this album that I want to highlight is the song choices, which complement each other in tone perfectly, creating a consistent soundscape that remains engaging throughout. I also want to highlight the energy of the performances. While the energy slightly varies in sheer ability, everyone is giving everything they have.

Colour Me In holds a top spot for me for not only showcasing a subtly emotional solo performance, but for equal sensitivity in the backgrounds of the arrangement. The building intensity of all the tracks are executed well, but especially on Save My Soul and Hold Back The River. I also enjoy The Beast, which is primal and haunting, complete with some light ambiance sounds.

I want to give a special shout-out to Fight Song. The soloist may not have pure diva power, but the sincerity of all the singers, especially the lead, carries it farther than a fantastic belt ever could. Also, Higher is a stand-out as a joint effort with Centerville High School's Forte.

Northern Lights from Plymouth North High School is a stong indicator of the future of a cappella and the caliber of talent of this new generation!

Northern Lights should be commended for standing out among high school a cappella groups by producing a full-length album. I wish all schools were as supportive of this type of project as Plymouth North.

When compared to the general body of a cappella recordings available, this is an average album. It has some good moments, but also reveals areas for improvement. I should note that RARB reviewers do not change the standards by which we grade albums based on the identity of the submitter, and that should be taken into account by readers.

First, the group would benefit from more innovative arrangements. All In My Head, Fight Song, and Beggin' in particular are held back by fairly boilerplate approaches. Repetitive stretches of block chords with "do"s, "ah"s, and "oh"s make me lose interest after the first minute of listening. The arrangements and production could also make better use of dynamics to achieve a fuller, more interesting sound. Northern Lights has the talent to tackle more complex arrangements, and they should.

Second, the energy of the background (and some of the soloists) could be improved. This is possibly a function of the arrangements, but after hearing Save My Soul, which I think is very good, it makes me wonder why the whole album couldn't have that same intensity. The soloists on Elastic Heart and Fight Song have potential that wasn't realized.

A third and more minor gripe is that the balance seems off in a couple spots. For example, from a production standpoint, the group could have brought out Lily Colbert's duet more, relative to the background and Chris Ferrante (who sings opposite of her in Hold Back The River). Lily sounds quieter than she should. And as a general aesthetic, I feel that Northern Lights leans into percussion too much, which distracts from the soloist and background.

With that said, there are also bright spots on this album.

Save My Soul is well-executed on all counts and the best track on the album. Jon Smith's arrangement adds texture and a steady build that earlier tracks lack, the background sounds engaged, and Kayla Wally does a great job with the solo. Readers should bookmark this one.

Zein Karam's earnest solo on Colour Me In and Bella Donovan and Julia McBride's duet on The Beast are good fits for each song. I also like that Elastic Heart is arranged by a recent alum — another testament to the talent coming out of Plymouth North.

The pacing of the album works well and I like Hold Back The River as the album closer. Northern Lights didn't try to pack too much into this album. If anything the album could have had a few more tracks and fared just fine.