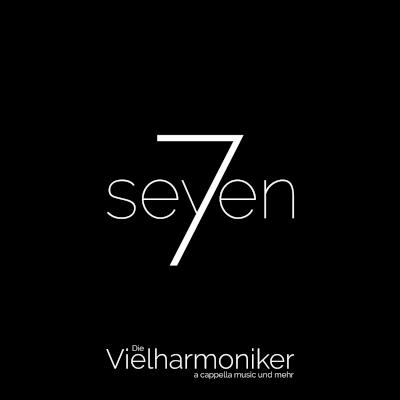 German vocal sextet Die Vielharmoniker has quite the eclectic selection of covers on Seven, ranging from American classic rock to Brazilian pop to British rock.

Unfortunately, the group falters a bit on the more well-covered songs; both Walk Like an Egyptian and Africa sound very European in their syllables and won't be as approachable to American audiences who are used to a myriad of domestic covers. Alternating soloists on Africa makes the verses sound a bit disjointed, although the group does pull it together for the choruses, and the wordless bridge/solo section is delightful.

The group really finds its wheelhouse on Honey Pie with its jazzy arrangement; the song moves and the group gels beautifully. Girls Girls Girls has a similar bounce and sass and is also a compelling listen (note: this is not a Motley Crüe cover; the song is originally by a 1970s British band called Sailor). These two songs are definitely Die Vielharmoniker's best work here.

Affecting the album's overall listenability, there are a lot of changes in style and mood between songs; the transition from How Deep Is Your Love to Mr. Blue Sky in particular is a bit startling. Each song works quite well on its own; it's nice to hear both a softer song from Die Vielharmoniker (How Deep Is Your Love) and one that's not often done a cappella (Mr. Blue Sky). But they sound quite different from one another, and I'm not sure I would've put them back-to-back here. As a side note, I love how the group handles the vocoder in Mr. Blue Sky. This is actually one of the most fun songs on the album; it moves, and the group sounds like it's having fun, too.

After listening to Seven, I'm not entirely sure what kind of group Die Vielharmoniker is trying to be here; the song choices and performances are all over the map. The most striking songs are definitely worth a listen, but the album as a whole is a bit jumpy and doesn't flow smoothly from top to bottom. I'd love to hear the group dive deeply into one particular style or genre and pick a selection of songs from it; the jazzy flair of Honey Pie and Girls Girls Girls would make that style an easy pick for me.

Throwbacks are almost universally accepted as a guilty pleasure. Whether it's a song from five years ago or fifty, I love a good walk down memory lane. Therefore, when an album like Seven comes along and boasts songs all originally released between 1963 and 1986, I am excited to hear what happens. The possibilities are endless. This German group opted to remain faithful to the original recordings. This creates two distinct parts to the album: one where the tributes are somewhat lackluster, and one where the presentation is a well-executed range of emotions.

My biggest gripe with the opening tracks of this album is a startling lack of overall song motion. All songs should have some rise and fall throughout the album. This rise and fall keeps the music interesting for the listener. Therefore, when a track like Girls Girls Girls comes along, it's very easy to become bored with the presentation as it's all sung in a medium-tempo mezzo-forte. While the work is a solid starting point, there is nothing that beckons the listener to return to this song.

Conversely, once we get to the end of Seven, we finally get a grasp of what Die Vielharmoniker is capable of. How Deep Is Your Love is a classic Bee Gees love song. Listening to this version, I am transported back to hearing this song with my dad on his old cassette tapes. The piece is timeless, well-framed, and very soulful. Immediately after, Mr. Blue Sky is fun and bouncy. I can't help but tap my feet along with it. The use of digital altering in the bridge just helps to mirror the original composition by Electric Light Orchestra, and it keeps the track moving. The album closes with Mas Que Nada, a classic Brazillian samba guaranteed to make your head bob along with the beat. Overall, a bit more work to keep arrangements moving forward while adding more impact and imagination would be appreciated, but these songs are a classic example of a well done, "no problems here" walk down memory lane.

In many ways, Die Vielharmoniker's Seven is probably more entertaining and fun for me than its technical prowess should warrant. There's a bubbly energy and enthusiasm to it that few a cappella albums of even higher skill levels tend to harness.

From a purely technical standpoint, there are many angles from which I can offer critique for Seven. The song choice is pretty generic and is predominantly "stereotypical a cappella". Many of the songs such as Africa, Walk Like an Egyptian, and Mr. Blue Sky have been far overdone in the style already.

With the exception of a couple of standouts, soloists tend to sing individual notes and words as isolated entities, rather than as phrases with a musical arc. Arrangements are solid but mostly stick to direct imitation of the instrumentation found in the original songs, rather than taking creative liberties and empowering the voices. This leads to frequently, extremely cheesy uses of background voices. More subtle-yet-important musical moments are not utilized in the best possible way; phrase endings can feel choppy, dynamics are often static, and many climactic moments are underdeveloped. Production work is solid — voices are crisp and placed well — but it doesn't elevate the voices much beyond that, and the mixing effects are hit-or-miss.

That being said, I still have quite a bit of fun with this album. I love how eclectic and varied the voices are; soloists don't try to fit a mold or imitate each other or the soloists they cover. I really wish liner notes were included in this album, because I want to keep better track of who was singing where. While not always singing with the most intensity, the singers sound like they had fun recording this album — and that's contagious to the listener. The album doesn't overstay its welcome either; Seven maintains its momentum most of the way through and is neither half-baked nor bloated at a solid seven songs.

Both my critiques and praises for the album become more and less noticeable in different sections. The flaws are most apparent and overshadow the album's strong points on the choppy and harmonically uninteresting Girls Girls Girls as well as on Africa, the only song on the album that I feel completely lacks any bubbly energy or enthusiasm. On the other hand, Mr. Blue Sky is filled to the brim with joyful energy, and it shows off the eclectic variety of voices well. Mas Que Nada is the best-arranged song on the album with its consistently organic use of the background vocals. Additionally, the unmoving dynamics feel less static and more evocative of a consistent vibe here.

This places my overall thoughts on the album somewhere down the middle. On one hand, my hyper-analytical mindset can't help but notice all the areas for improvement in voice work, blend, musical choices, arrangements, soloist work, and production. On the other hand, Die Vielharmoniker's unfiltered nature combined with the heavy enthusiasm behind it compel me to ignore these technical observances much of the time. I'd love for the group to gain some technical coaching and exposure to more varied song selection, all while retaining the effervescence of Seven. The potential shown here makes me excited to hear what's next for Die Vielharmoniker.