The Gentlemen of the College

The College of William & Mary 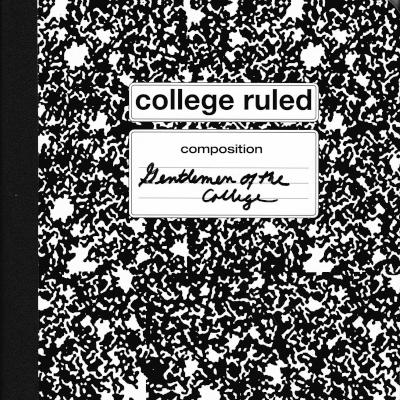 College Ruled largely sounds like a first draft of a recording, one that gives the creators something to work from to edit and refine before the final release. And nope, this isn't the group's debut offering — College Ruled is the 17th album released from this longstanding William & Mary group.

The soloist's work on Take Me to Church offers as much sophistication as you'll hear from a soloist on College Ruled; Jonah Fishel is a committed lead who brings this track to life. He starts restrained inside a sotto voce framework through the first chorus, which takes guts. He rips it open for the second verse on, gradually and steadily increasing his intensity to keep listeners hooked until the end.

The head-scratching then starts. Death of a Bachelor features a lead who breaks up the main hook line with a hard stop and a rest in the middle of a word: "The death of a baCH [-rest-] LERRR!" If you're unsettled by that, there's also a rap section injected into this one, too. Honey, I'm Good. has pretty harmonies but doesn't quite capture the get-up-and-go it needs. The soloist struggles with intonation and awkward phrasing/placements on I Want It That Way. After a traditional interpretation for the opening of Eleanor Rigby, the song morphs into a slick and loud club/dubstep mix. Some sections are awesome! Others feel inappropriate and too wild.

Riot is definitely the all-around winner here for listenability. This ballad is breathtaking, crafted well and movingly delivered — this sounds like a final draft.

Head-scratching resumes with The Cave, a song with hand-delivered rhythmic interest from the original, but clumsily sung on College Ruled.

Alas, it does not. Listeners will tolerate one live track at the end of your album — the "traditional" song your group passes on to new members, or your college's anthem, or a downtempo song sung in an acoustic setting. Loch Lomond and Alma Mater pop up as a duo at the end of a lot of Gentlemen albums. With College Ruled, we get an astounding four live tracks — and tacking four songs onto the end of your album isn't so special or nostalgic, it's a whole EP back there. This live mini-release snuggled into a larger release has a sound that's significantly lower in quality than the preceding studio tracks — often quite muffled — really depleting College Ruled as a whole instead of finishing strongly as a unified offering. It's the reason I can't give College Ruled a "3", because there's nothing "average" or "commonplace" about a choice that colors the whole album. There are many shortcomings spotlighted in a live arena. Instead of picking them out, I'll instead lament that the stunning main lead on Loch Lomond couldn't get this mixed in a studio, as his version would probably become a family heirloom.

I am optimistic by nature; I also once owned a William & Mary sweatshirt that I wore to threads. Let's rally for #18, Gentlemen!

College Ruled is my first introduction to William & Mary's The Gentlemen of the College and it arrives cleverly enclosed in a cover resembling the classic composition notebook from my 6th grade language arts class. Inside, of course, is not the short story I wrote in 4th period, but rather an interesting choice of both live and recorded performances by the Gentlemen. One thing I liked from my initial run through of the album was the mix of tranditional a cappella throwbacks like It's In Her Kiss to balance out common picks such as Take Me to Church or the The Cave.

I have a hard time attempting to boil College Ruled down to a distilled number. While I generally like what I hear on College Ruled, I don't quite hear anything that screams out to me, grabs me by the collar, and demands a "5". What makes me hesitant to push this album into "4" territory are a few concerns of consistency and intensity on certain songs. Death of a Bachelor is probably best indicative of this. It's in tune and the notes are all there, but it lacks soul. I feel a bit unclear about what I should be feeling, or where the song is going. The background doesn't quite work with the soloist enough to shape the direction our ears should be leaning.

I Want It That Way has a similar problem. In an odd way, it's a tough sing in the sense that it's so well-known that most will naturally measure it to the original Backstreet Boys recording by default. Again in this instance, the Gentlemen's version sounds nice but a bit a flat dynamically. The song just sort of begins. The intro is stripped of any semblance of 90s boy band angst, and for a while it doesn't quite feel like the listener is headed anywhere until the dramatic key change in the end. In all, we're kind of left with a more methodical, glee club sounding rendition which is still nice, but it doesn't trigger the nostalgia feels I think the group is going for.

On the other hand, Honey, I'm Good. and Hold Back the River are in a completely different category. Honey, I'm Good. is well-balanced and there's a subtle warmth that can be felt radiating from all the voice parts. Everything grows together nicely from start to finish and feels engaged with each other. Hold Back the River has an excellent blended wall of sound, and solid transitions and dynamics between verses and choruses — soft and delicate at one point and then bright and colorful at the peaks.

In all, the Gentleman have really strong raw ingredients to work with. When they lock in on songs like Loch Lomond or even Riot, they prove they've got a neat, blended sound. So long as they keep their intensity focused, I see no reason why their next project wouldn't excel.

In the style of a composition notebook seen in most generations of school before iPads and Chromebooks, College Ruled from the Gentlemen of the College appears to be a collection of songs from the '60s to now, wrapped in a neat package. Unfortunately, the contents of this notebook suffer from a Dr. Jekyll/Mr. Hyde effect and there is too much inconsistency to warrant a particularly good grade.

The first two-thirds of the album contain a healthy mix of standard male collegiate fare: generally upbeat tunes with arrangements that don't try to reinvent the wheel. Take Me to Church has a nice dynamic and intensity build throughout. Eleanor Rigby starts in a deceivingly pedestrian way before becoming the most energetic track on the entire album, aided by very strong vocal percussion contributions from Ryan Dean, Sky Jarrett, and Nolan Peters.

On the other hand, even some of these earlier tracks fall victim to inconsistency or are otherwise vapid. Death of a Bachelor, the popular tune by Panic! at the Disco, is a prime example. The Gentlemen's rendition features a percussion track with much of the intensity and complexity of the original, a soloist with angular rhythms and a laid-back interpretation, and background vocals that fall somewhere in between. The group's cover could go in any of these directions but is not unified in its approach and leaves each element exposed. And despite the nostalgia and recognition factors, songs such as I Want It That Way and The Cave come off lethargic here.

The most surprising detail about this album is that the last four tracks are live. The minimal liner notes list that only two of the last four are live but the information provided to RARB and Spotify suggests otherwise. Regardless, the result is rather jarring when exploring the whole album and creates a sort of dual-listening experience. The inclusion of live tracks at the end of a studio-produced album can be appropriate, provided there is high-end recording equipment and the execution of the piece is strong. However, this is not the case here, and the last third of the album is puzzling in its considerable departure from the first eight tracks.

According to the liner notes, there are more producers on College Ruled than there are tracks. Perhaps a more unified approach to production could have resulted in more consistency throughout the album and a more fully digestible product.