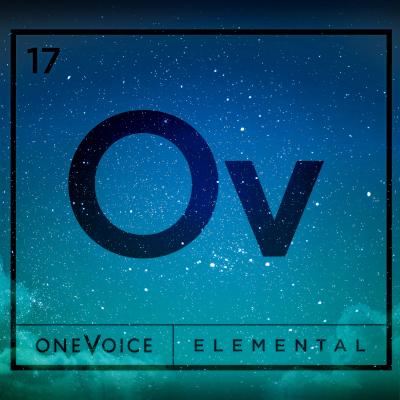 For scholastic a cappella fans, little is as exciting as hearing a new OneVoice release. Marvel over the best teen voices recording today, who will grow up to be tomorrow's a cappella darlings. Analyze a full disc of new arrangements from the deep well of Rob Dietz's mind. Listen to the latest production enhancements and schools of thought from Dave Sperandio, Alex Green, Alex Koutzoukis, and Ed Boyer. And how will visionary J.D. Frizzell present the completed package showcasing his students and their esteemed collaborators? OneVoice's annual primer of All The Best Work (formally called Elemental this year for cataloging purposes) is well-studied and hopefully roundly enjoyed by everyone who huddles up in our a cappella field.

As is the OneVoice standard, Rob Dietz has scored extraordinarily complex works that require each voice part to be independent while still fitting snugly into the larger whole. This year he seems to like a little more unison across vocal parts, a bit more playful syncopation, pushing tempos, and some retro "hey la" action, too. I think the piece that equally demonstrates OneVoice's strengths and Dietz's strengths is the Sara Bareilles song Islands. The lead creates vocal poetry with her breaths, with her softness, her loudness, her light enunciation, then strong enunciation. It really sounds like sung poetic stanzas. As for Dietz's work here, he takes an already beautiful, breathtaking song and makes it doubly so. This one hurts so good.

The best single track, however, is probably Sun. It's so surreal and serene, that it's hard to believe this number really happened. Where the lead and group is channeling this other-worldly, higher-level-of-existence sound and form and exquisite crafting from, I do not know, but I'm glad someone hit the "Record" button. Other novelties include the use of three similarly-voiced soloists on Thunder who have tremendous control of earthy straight-toned singing, and can land on notes perfectly while infusing sophisticated musicality instantly. These ladies sound like well-paid stage professionals (a preview of their future, I hope). I also enjoy that Headlock is permitted to overflow with sound; high school lungs received their daily exercise here. The same direction was written for Human; when those massive choruses hit, your whole skeleton shakes. OneVoice does quiet intensity so well, that it's nice to hear these singers go full tilt, too.

The slight miss for me is in the programming. The lovely baritone who opens Elemental on Freedom is a delight to hear. Though this rather short, rather repetitive number that nearly has the humanity produced right out of it isn't the best first impression for this advanced ensemble. The biggest accomplishment of Freedom is simply that the group kept it all together and clean with the freeway-speeds involved, instead of the artistry that is OneVoice's calling card. The curiosities continue on the opposite end with When You Come Back Down. One need not end with a huge banger piece or a singalong favorite or a glorious anthem, I suppose, but ending on a sweet-harmonied friendship piece doesn't leave much of an impression. Does it perhaps nod to the life and times of high school students and have emotional meaning for them? Sure. Is it the song you'll keep playing as patron? Probably not.

Your instructions continue: a recording from OneVoice is still required listening. See how Elemental fits among your favorites.

The human experience is defined, in many ways, by elemental emotions like joy and sadness. Truly exceptional art is defined, in many ways, by elemental effects like the ability to capture the human experience and the ability to provoke or evoke its fundamental elements, joy and sadness. Briarcrest OneVoice is a vocal group whose perennial mission seems to be exploration of these themes in pursuit of artistic expression. Under the leadership of director J.D. Frizzell, the group has frequently explored art-by-narrative, always sounding great in the process. And while previous albums succeeded on the merits of strong arranging, singing, and production, the group's latest album, Elemental, takes a step forward where none seemed possible. Simply put, the group has hit an unexpected higher gear in exploring the human experience in a deeply fundamental way.

As always, it begins with the arrangements, and returning arranger (and fellow RARB reviewer) Rob Dietz has never been better. He, like returning audio wizard Dave Sperandio, connect with each other, and with Frizzell, on such a basic level, in such a seamless way, that the album is a cohesive Piece of Art in a way I'd thought long gone. The atmospheric elements Dietz envisioned are carefully and lovingly woven by Frizzell's talented singers, then captured and polished by Sperandio's attentive hand. An album this focused on core emotions and experiences could not work with anything less than excellence from all three key players, but more importantly it could not work without inspired, invested, and intelligent singing.

In past reviews, I lauded OneVoice soloist Hannah Gray, who stole at least one track on each of the previous three albums. Here, I cannot suppress my admiration for Katherine Ann Mohler, whose turns on Lightning, Islands, and Human are impressive and engaging. I have to also acknowledge two of the group's male soloists, Jeremy Beloate, who more than holds his own with Mohler in Human, and Wesley Abington, who soars on Sun.

Sun is perhaps the best example of what might, two hundred years ago, have been called programmatic music. The wash of sound, the swells, the bubbling rays of sunshine, are vivid and evocative, and a stunning amalgamation of thoughtful efforts from all contributors. It is not, however, the only such example. Songs like Freedom and Islands benefit from similarly successful atmospherics and contemplations. For the first time, OneVoice also explores something a little grittier with the sinewy, grooving Human.

Elemental isn't perfect. Thunder sags a little and Megan Cheng struggles with a solo that dives just a hair below and above her comfort zone. When You Come Back Down doesn't quite hold the listener with the same punch and pull as the first six tracks, though the warm solo keeps me engaged with each listen.

But it's okay, because art is not perfect. Like the human experience, it can be messy, inconsistent, and surprising. OneVoice has captured that experience in a powerful and compelling way. I don't know where OneVoice will go from here, but I won't be surprised if the group continues to dig deeper into their (and our) hearts, minds, and souls. And I'll be listening, smiling, and crying along with them.

If you haven't heard of Briarcrest OneVoice, where have you been? As if appearances on America's Got Talent, The Sing-Off Live! tour, at the London A Cappella Festival, at the Southern ACDA conference, and winning the Macy's All-School A Cappella Challenge weren't enough, Elemental is the latest release in the group's growing discography and continues the previous iterations' mastery. The group's director, Dr. J.D. Frizzell, is a champion of a cappella education and has led generations of students to a cappella excellence, shedding the barrier between high school a cappella and professional vocal work. With contributions by some of the a cappella community's most talented artists and technicians, Elemental is an album not to be missed.

Perhaps one of the greatest facets of Elemental is that there is not a single weak or anemic track. Each is brimming with a different sort of emotional energy at every moment and the soloists, however young, leave nothing more to be desired. The arrangements by Robert Dietz allow a significant amount of musical ebb and flow and fit perfectly with the percussion tracks, masterfully edited by Ed Boyer. The tracking, mixing, and mastering by Dave Sperandio and editing by Alex Green and Alex Koutzoukis of Plaid Productions combine to make a seamless, high-quality listening experience.

There is something to appreciate about the vocal work on each track. The infectious energy-laden Freedom, coupled with the very mature, natural solo by Jeremy Beloate starts the album on a strong note. Lightning maintains that energy but transforms it into more of a gradual bubbling, told brilliantly through the arrangement's build. Soloist Katherine Ann Mohler's journey in Islands is nothing short of captivating professional storytelling. Headlock is a beautiful textural experience, featuring some great background vocal effects to set the mood viscerally. The driving percussive lines and simple, yet effective harmony lines with the soloist in Sun pick up the energy to set the stage for a compelling rendition of Human, which splits the popular Rag'n'Bone Man solo between multiple soloists for a unique cover. The album could perhaps end with the powerful Thunder, but it's followed by a beautifully subdued rendition of Nickel Creek's cover of When You Come Back Down, which is especially poignant in an all-vocal setting.

As a listener, the awe I have for OneVoice is compounded when I recall that they are, in fact, a high school a cappella group. The physical album has bios for each group member, which is a very special acknowledgment of the young professionals beginning their journeys in singing and in life. I cannot recommend this album and this group highly enough: if you haven't started a YouTube or streaming music search for them yet ... well, what are you waiting for?