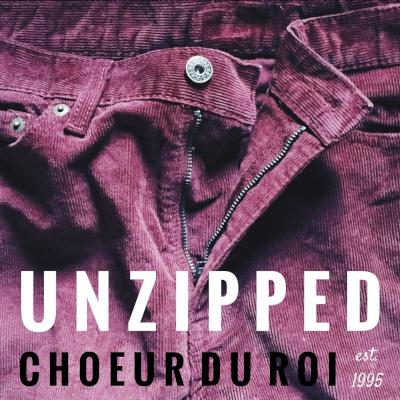 Changing is a full symphony for the ears with sizzling beats and energy. It's a lovely example of having production (Bill Hare) bring out the best in both an ensemble's skills and the arrangement driving the chart. It's a strong opener and a solid standalone, too. Choeur du Roi used Ed Sheeran's slick gospel-funk cover of Wayfaring Stranger, which is just as captivating out of their mouths as his. The shifting tempos, grooves, and really commanding inflections from the lead keep the listener leaning forward for this one. Better Dig Two is a fresh arrangement with a pouty-lipped performance from lead Brennan Rankin. Laughter Lines is really atmospheric with playful vocal lines, especially the violin-esque soprano that bookends the song. However, the bass line is a bit more popped out, and we can hear the artificiality too clearly — it can't just be a fat tone on the bottom of the mix and reach maximum effectiveness. This is the standard bass on all of Unzipped, but it's futher out here. Still, consistency is good, no?

And then we reach the EP's storied end. 1995's appearance on Unzipped is like that dorm party you went a little overboard at. Obviously very fun to do at the time, but the next morning ... look, it just shouldn't have happened, alright? This hyper-mashup changes songs every few measures (or less), making it more than jarring; it's nearly uncomfortable. Since the group does upbeat and snappy so well, I would have been happy to hear the group's full take on Mariah Carey's jubilant Fantasy rather than barreling through a quick-clip tour of 1995 hits. The piece also can't stand on its own legs next to the more elegant and sophisticated work demonstrated on the previous tracks, sinking the whole release down a notch. This is the kind of arrangement that works well for campus gigs or rehearsal antics, but not for the mass market.

Unzipped fits snugly with prior releases. If you liked Choeur du Roi before, you've got more of the same to sing along with.

When it comes to studio production, there are many areas a sound engineer can mask or adjust. One crucial component that cannot be faked is genuine passion and energy. And in the case of Unzipped, much of the EP's strengths lie in Choeur du Roi's ability to infuse life and joy into the vocals, resulting in five tracks that hold the listener's attention all the way to the very last second.

Unzipped is a short but to-the-point project that's at times playful and other times serious in tone.

The EP's opener Changing establishes the group's vocal talent right off the bat with its soulful and rhythm-heavy stylings. The crisp bass and heavy percussion do an excellent job of mostly steering the ship, creating infectious energy that never loses steam. Couple this with a soulful lead and breakdown section, and you're off to a good start. Backing vocals can sometimes get lost in the mix, but it hardly prevents the listener from enjoying the music.

Wayfaring Stranger offers the opposite. The arrangement is darker and more impactful in terms of eliciting an emotional response. From the scarcity of vocals in the opening, to the heavy, almost brooding feel of the track, Choeur du Roi constantly keeps the listener curious as to what will come next. The lead exhibits a well-controlled and rich vocal performance, which cuts through the abundant layers in the latter half of the song, playing off the heavily rhythmic backing sound with relative ease.

Better Dig Two works well in upping the intensity. This pop-rock stunner exemplifies a more aggressive approach as each verse draws off the momentum of the previous one. Choeur du Roi knows exactly how to build dynamically and then drop out. The subtle nuances such as the light clapping add so much in the way of filling out the sound. Not to mention, the lead's voice has a strong country rock quality to it that's quite impressive.

Laughter Lines is a smart selection to include on this project with its strong electronic rock sound. The arranging itself is smart, too; the lingering notes of the sopranos to the detailing in the mid-voices all works well in producing a complete sound. This also helps in directing the listener's ear and truly feeling the song's progression.

Not much more can be said about 1995 other than the entire experience is extremely fun and nostalgic. Transitions are quick and appropriate, and soloists play their roles well and never come off as gimmicky. And like the '90s, there's plenty of style and energy. What's most enjoyable about this medley is the song selections. From the Notorious B.I.G. to Radiohead, nothing is off-limits.

As a whole, Unzipped is just at the cusp of being great. There are a few balancing issues, a bit more inventiveness needed with arranging, and tracks could use more "wow" moments (often achieved by soloists). But this won't detract you from enjoying all that this release has to offer.

Have you ever been to a restaurant that you know is fantastic, but for some reason, one visit is a bit of a letdown? And it's not that the meal on that visit is bad, but in comparison to prior experiences at that location, it's not what you hoped for. That is how I felt listening to Unzipped, the latest EP from Choeur du Roi from the University of Richmond. The arrangements are fine, the soloists are good, and the sound production is decent. A spark of greatness peeks through a couple times, but overall, it's average.

The arrangements are an interesting mix of empty and rich. Changing has a decent percussion groove, but the backgrounds stagnate with sustained block chords; there is very little to grab onto. Better Dig Two, on the other hand, has rhythmic backgrounds that create a contrast that locks the groove and the feel of the song in place.

Wayfaring Stranger has a ton of potential but falls short. I love taking simple approaches to powerful songs, and it's clear that this was the goal on this track. But it went either too far from the simple concept or not far enough away; perhaps both. Three different vocal themes come together and I should be feeling big feelings, but I don't. I want to hear stomps and claps to drive the heartbeat of the song into my soul.

1995 is a medley of songs from that year, which is a concept I adore. The problem is that the arrangement doesn't evolve organically. It's like a montage with no context. I need an audio signal at the beginning, like the lyrics to a few different songs layered together, or even a flat-out spoken intro. This would also naturally create an opportunity to end with a mini-mashup to cue that I should be pumped for an ending. I guess the best word for this track is "jarring".

I do want to mention the moments of greatness. Nearly all of Better Dig Two is perfect. The arrangement is fully immersive, and the soloist is completely engaging. Laughter Lines has an equally full arrangement for the most part, but the distorted vocal that soars above everything else gives the whole track a shimmer that the other tracks don't have. The soloist on Wayfaring Stranger has a voice with tons of personality, but I don't think his full potential is brought to bear. And there are definitely glints of greatness throughout 1995 as each vignette highlights different styles and singers in dynamic ways.

If I didn't know the talent this group has, I wouldn't be taking the singers to task on Unzipped. It's still a fine addition to an a cappella fan's collection, but for me, I'm looking forward to the next one. Even master chefs make less than perfect meals now and then, but they always come back with something even better. I can't wait!