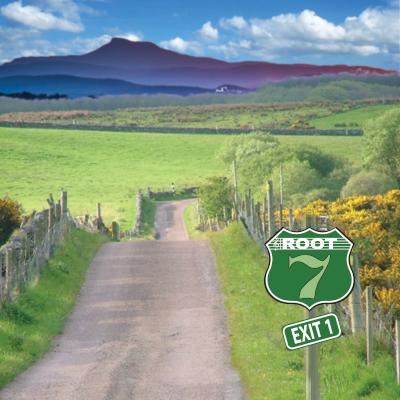 Root7 is a group that comes together after their full-time jobs to have fun making music. Exit 1 is the group's studio effort, and while it's nothing to write home about in technical terms, a love of singing together shines through.

The word that comes to mind for this album is raw. The production value is simple: clean tracks, in tune, and some EQ tweaks as needed. I support the organic feel this gives, but the raw material could be enhanced to maximize song impact and still feel organic. For example, the percussion is constantly at a good place to keep the song moving forward, but the iconic drum fill in In the Air Tonight is at the same level as the rest of the track and thus loses its edge. The power is gone from that signature moment, when turning it up in the mix and playing with the pan a bit could really make it pop.

The other issue I should mention is that the emotional connection with the solos isn't quite there. The talent of the singers is clear, but it never feels like the voices resonate with the lyrics. There are times it gets close. Dance in the Graveyards has an element of joy that comes through, and I'm Yours / Where is the Love is nearly magical at moments.

This brings me to something that is really special about Root7 — the arrangements. They aren't the most dynamic or interesting arrangements in the world, but the care that is taken to pay respect to the essence of the song is 100% evident. Don't Stop the Music is probably the weakest in this regard, while Blown Away hits some really powerful block chords. And Back Home is just charming and makes you want to take another listen.

This is by no means a perfect release, but I feel like these are great people who would be a blast to sing with every week after a hard day of work. I'll take fun over perfection any time. And I can tell they'll just keep getting better!

Exit 1 is the debut release for Burlington, Vermont-based Root7, and you will be doing yourself a severe disservice if you "exit the highway" after listening to just one track. From start to finish, Root7 has filled this album with beautiful solos, fun and groovy backgrounds, and intricate arrangements that will have you bopping along on future car rides.

Starting with the second track, Phil Collins's In the Air Tonight grooves from start to finish, with Root7 taking the track a little bit more uptempo than the original. The "ooh" swells in the upper parts at the beginning of the track hook you right in, and there is such a percussive quality in all the background parts that complements the vocal percussion really well, keeping the song moving the entire time. I'm not sure who is singing the baritone line, but that may be my favorite vocal line I've heard in awhile. It's a repeated, almost hypnotic "do-ba-do/do-ba-do/do-ba-do-ba-do-ba-do" that just sounds like so much fun to sing. Speaking of having fun, Corrine Mertz delivers an emotional and restrained solo, not letting us hear what she can really do until that last chorus where she blows the top of the record. Well done — this will be on repeat for at least the next couple of weeks.

If In the Air Tonight is my favorite track, then Dance in the Graveyards is a very close second. The percussive backgrounds are again prevalent on this track, especially in the chorus with the accented "din"s. But what I love the most is the bridge — when soloist Joe Antonioli gets to "And we will walk beyond / our daughters and sons", he drops down to the lower harmony instead of singing up on the higher melody line. While I'm presuming the decision to include this was in part because of Antonioli's range, I really like how that harmony fits with the higher melody (although it was a little tough to pick out at times) and with the sustained bass.

The union on the third track between Jason Mraz's I'm Yours and Where is the Love from the Black Eyed Peas works very well from the beginning, starting with very sweet solos from both Chris Nial (I'm Yours) and Kayla James (Where is the Love). Nial is also the arranger of this track, and he does a great job integrating the two songs into the backgrounds. The group seamlessly transitions from one song to the other and upon first listen I didn't even realize it happened until a bit of time passed — it just works so well. My only criticism is that at around 55 seconds left in the track, it does seem a little chaotic with the soloists singing the chorus of I'm Yours, the chorus of Where is the Love, and a separate verse from I'm Yours. For me, it's a little hard focusing on one or two of those lines at the same time. However, that cluster only lasts for about 20 seconds or so, and after the Where is the Love part passes off to a children's choir, which is just adorable. And, yes, they sound just as amazing as the rest of Root7. I absolutely love this addition to the last bit of the track — here's to hoping that Root7 has started a trend!

My only little disappointment is from Blown Away, where I am just left wanting a little more. Antonioli's arrangement is very challenging and intricate with a number of off-beat entrances, and the group handles it with ease. And James delivers a very pretty solo that has a lot of emotion throughout. However, I wanted a little less pretty and a little more grit in certain parts of the track, particularly after the bridge that has quite the build up ending with what sounds like some sort of explosion effect. Coming out of that, the group doesn't hit that final chorus with the same punch that the bridge has, which leaves that final chorus feeling a little empty.

That being said, Exit 1 is a tremendous debut album that Root7 should be very proud of, and I cannot wait for the group to release the next one (hopefully with more appearances from the choir)!

Hailing from Vermont, Root7 is a new face at RARB. With any new group, I always love to think of the debut album as an introduction to the world, best letting us see what the group does or does not do well, and what the overall sound is for the group. Exit 1 is a curious little EP from the nonet, for many reasons. There are little flashes that are done well, but Root7 still has a ways to go in figuring out how to find its unique sound and fill the musical space.

Filling musical space is a task that gets harder and harder the smaller the group gets. For many larger (usually scholastic) groups, it's incredibly easy to add another part to add a different rhythm or extra color notes. The smaller the group gets, the harder it is to simply add a new rhythm because it means possibly sacrificing another musical idea. With the track In the Air Tonight, this sacrifice is very apparent. Phil Collins originally performed this song to have a large buildup lasting about three minutes before finally exploding. This buildup is done by slow additions of extra rhythms, different chords, and swells in dynamics. However, with a relatively small group such as Root7, there hits a point where the addition of another part means the loss of another. The buildup starts to die out before the climax hits. It's a challenge solved by being even more meticulous about arrangements and finding out how to get more space filled per performer.

And it's not to say that Root7 hasn't proven that they can do it. In a conversation I once had with the brilliant a cappella great Chris Rishel regarding how to arrange for smaller groups, he once told me to "arrange for a Tanner part rather than a Tenor part". When arranging for larger groups, a powerful wall of sound is in many ways a part of the group identity. Due to the number of voices on each part, notes that might not sit perfectly for one individual are able to be carried by the rest of the section. With smaller groups, there is no safety net of a large section. Members have to pull their own weight. To make this possible, arrangers must ensure that each vocal part should not only fit within the overall arrangement (what they want the tenor part to be), but also within the strengths of the individuals (what "Tanner" can sing well). Don't Stop the Music is a successful execution of this concept. The arrangement isn't overly complicated, but the parts work so well together. The bass and percussion lay down the groove for the entire track and keep everything pushing forward, allowing the upper parts to float over the top to add accents to the music. Add in Sharon Silverman's combination of sultry and powerful, and the track just grooves. This is the kind of track I want to hear from Root7. It's a track that no other group can perform. Furthermore, the energy is locked in on this track more than any other track on the album. A lack of contrast keeps me from giving the number a top score, but it's darn near close.

Exit 1 may not be one to immediately keep on the top of the pile, but I would definitely recommend keeping an eye on this group in the future. With little tweaks here and there to really find out what works great for the group to fill the space and keep its identity, Root7 is going to be a fascinating group. With a little more work and a couple new ideas, anything is possible — we may find ourselves going up to Vermont for the maple syrup and staying for the a cappella music. It's a future that's not out of reach for Root7, and I want to see it happen.