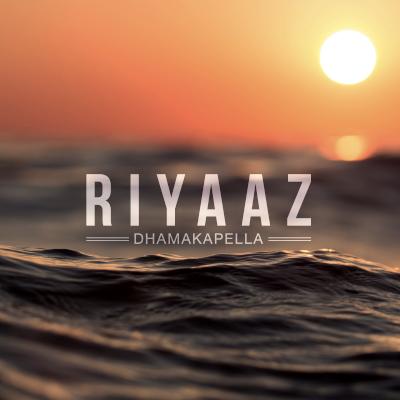 As of this writing, there are over 200 South Asian A Cappella groups nationwide and five established national competitions solely for this sub-genre of music. I found these stats courtesy of the Association of South Asian A Cappella, an organization I only recently learned about. Despite being firmly planted in contemporary a cappella, I had no idea this sub-genre grew so profoundly since Penn Masala started off the show in the mid-90s. I regret not being more aware, because Dhamakapella is certainly worthy of closer attention.

Riyaaz is a three-track recording from the group's 2016-2017 competition set, and it served them quite well based on arrangement awards alone given during competitions. It opens with Every Teardrop Is a Waterfall / Ilahi. The piece is a very fun listen — spritely and hopeful despite the lyrics — but I think the vocal percussion and bass-boost is too overwhelming for the delicacy of the treble line. Writing's on the Wall / Duaa has more intrigue than initially anticipated, because the big, booming, very familiar chorus of Writing's on the Wall simply never drops. We do hear the chorus, but with the elements of Duaa never far from reach, the whole presentation is warmly relaxing. (Some will be unsettled by this lack of a real climax; it does take some getting used to.) Regarding this newfound presentation, Dhamakapella writes that none of these tracks should sound like a mashup — these fusions are standalone pieces. Amazingly, tracks one and two completely sound like standalone pieces, which requires both deft arranging skills to couple East and West while still maintaining recognizable motifs from the covers. (I'm using "amazingly" because too often, we simply get a Top 40 chart bumped up against an Indian work in an ABAB format.)

The most impressive song on Riyaaz, however, is the last. If Man Mandira sounds like an epic track from a film score, it's because this work is exactly that, taken and reinterpreted from the movie Katyar Kaljat Ghusali. Tune into this one immediately to hear the impressive lead singer show off his classical skills at a dizzying rate, and so finely that you may forget there's a whole group behind him. This closer transports you to a new place, and that's a big credit to the performance ability of the whole ensemble.

Riyaaz is unique and engaging, offering stronger arrangements than RARB typically receives in the South Asian a cappella realm. I'd like to hear more fire from the backgrounds in the next release, but this group certainly has its charts in place.

Dhamakapella presents a short three-song EP that's too short to talk about in broad strokes, so here's a granular view.

Every Teardrop is a Waterfall / Ilahi is a fun opening. There's a lot of stylistic switching that goes on throughout the track that both works well and doesn't. The first thing I notice is the alternation between rigid and flowing rhythms. It's an interesting choice. The opening rhythmic pattern lingers throughout most of the track. However, sometimes the pattern has spaces between each note, sometimes with just a space after only the last note, and sometimes with no space at all. It's a very interesting decision, as it can be used as a way to influence the direction of the song. With the constant juxtaposition of English and Hindi vocals interweaving, this constant change could have created multiple styles with the same pattern. However, it feels to me like it was just the arranger's decision as to when the rhythm was rigid and when it flowed. It adds a sense of complexity to an array of fun motions, but it isn't adding much effect. It's not until the backgrounds change entirely to a new pattern and more chord-based backgrounds that the difference in styles are really noticed. It's a cool concept that just seems to fall a bit short overall.

Writing's on the Wall / Duaa makes it obvious early that this song is going to depend entirely upon the soloists to make or break the presentation. The three soloists Sahi Hari, Niharika Karnik, and Shaunak Roy absolutely nail it. I love the arranging decision to have the languages constantly flowing between one another. It adds so much depth into the songs. The emotion lingers between both languages and it accentuates each past what it could be alone. However, for all the work that the soloists put into the track, the backgrounds don't seem to be putting in the same amount of effort. The energy plateaus around the 2:35 mark. Even though the rhythms change, the overall climax of the song loses its impact in the grand scheme of things. Even worse, it feels like the impact decreases over the course of the climax. It sounds great, but without that energy driving through the big moments and not just to them, the song sounds a bit monochromatic.

Man Mandira is the best song on the album. It starts slowly and thoughtfully before accelerating and just becoming fun. The build is very effective across the length of the track and the soloists have a great presentation of Indian classical vocal manipulation. The vocal runs are incredibly tight throughout the rapid change of notes, and it's incredibly impressive. The rhythms are not overly complex and at times become block chords. It's not bad in spurts, but the lack of variations between the individual background voicings eventually leaves something to be desired.

Overall, Riyaaz is a solid showing but still has room to grow. I very much like many of the decisions that Shaunak Roy makes in the colors of the backgrounds, but finding ways to keep the energy and the emotion moving forward as the songs advance is still a bit of a lacking area in this album. However, even with the flaws, it's still a fun — albeit small — showing from this Case Western fusion group and a nice little change of pace addition to any a cappella collection. Take a listen and enjoy.

Riyaaz is a three-song EP from Dhamakapella. This short release captures the essence of this South Asian fusion group in just twelve minutes. The work is a pleasant listen and in line with the group's previous recording projects.

Every Teardrop Is a Waterfall / Ilahi brings together a Coldplay song and a Bollywood song in a relatively seamless way. The soloists shine and the background does a good job supporting them with its subtle swells. The atmospherics are there.

Writing's on the Wall / Duaa is my favorite song of the three. The group does a good job merging the two songs in a way that is thematically consistent and engaging for listeners. Niharika Karnik, Shaunak Roy, and Sahi Hari, the three soloists, approach the song with a humility and resolve that makes for an emotionally compelling performance.

The third and last song, Man Mandira, is unique in that it is an Indian classical solo laid on top of Western chord progressions. I like the juxtaposition. It's exactly what listeners would expect and want from such an endeavor.

With that said, though, the EP could benefit from more innovative arrangements that are less reliant on energy-draining block chords. I had a similar reaction to Penn Masala's most recent release, Yuva. At times, perhaps because of the musical requirements of fusing the two genres, it feels like the group dilutes the songs. The backgrounds are there to support the soloists but on their own, do not add a ton of value to the song. This is something Dhamakapella could work on in the future.

Riyaaz is not a show stopper, but it is in line with the average RARB submission and worth a listen.