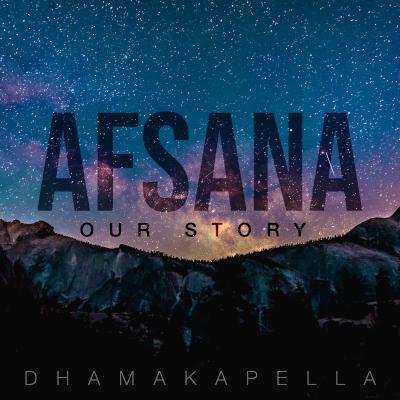 Afsana: Our Story is a very good sampler from Dhamakapella – a fusion of Western and South Asian pop music that lives up to the concept's promise. The Indian vocals are the highlight of the collection, stunning solos that grace each track with musicality and a sonic anchor. Naveen Ram and Chandrika Sanapala not only have great voices, they also have a great command of the South Asian sound and how to lay it properly over a background of North American Top 40 beats.

South Asian pop music has the advantage of sounding both novel and familar to someone used to U.S. radio. The words are new, the melismatic stylings are enticing and the rhythm section provides an instant connection. Dhamakapella, out of Case Western Reserve, has a good sense of what will show off its singers to maximum advantage. Dhamakapella also picked good canvases. Madness is a popular mashup choice because of its steady beat and versatile drone, as previously shown by Rak Shalom and Anokha. It's paired here with Phir Le Aya Dil, a lovely ballad that won a pile of awards after its 2012 Bollywood release. Later on, What Love Is / Preet allows for a balanced give and take between the English and Hindi lyrics. A strong beat frames I Need Your Love / Balam Pichkari, with Marinna Panting, Shaunak Roy and Sanapala sharing the solo duties. The first voice on this track reminds me of Shakira more than anything else, showing that pop music these days sounds more like other pop music than anything else per se.

Roy is the arranging link among all four songs — the three full tracks and Regression, a sort of Madness reprise that slides between the first and third numbers. He would seem to be a strong collaborator and a talented soloist in his own right. Panting and Ronnell Canada also have multiple contributions. From our a cappella world, Liquid 5th productions handling the editing, mixing and mastering is another reason why these tracks sound both good and familiar.

The songs of Afsana: Our Story are freely available on YouTube and SoundCloud and make up less than twelve minutes of music. Do yourself a favor and go have a listen.

Two very prominent features from Riyaaz are also heard on Afsana. The first, a noteworthy positive, is that these tracks are again interwoven as standalone pieces instead of a more stapled together here's song one / and here's song two mashup. This arranging elegance — creating new pieces based on source material instead of merely combining two hits — is quite rare in the South Asian fusion realm and certainly sets Dhamakapella apart. There's even an instrumental-style original musical interlude on Afsana, the short piece Regression that beckons back to themes in Madness / Phir Le Aya Dil before slipping away and advancing the release forward to new music. Though rather gently executed, this work is clever and demonstrates the talents of Dhamakapella.

My closing comment for Riyaaz also pertains to Afsana: "I'd like to hear more fire from the backgrounds in the next release, but this group certainly has its charts in place." Still true. Afsana has a nearly stubborn mellowness, only allowing full group intensity on the final piece, I Need Your Love. Madness is a huge opportunity to show the emotional impact Dhamakapella can deliver listeners, but the group's more careful, restrained approach doesn't allow us inside very often. We only hear one big vulnerability moment — from the female lead in What Love Is / Preet, who absolutely goes for it and lets her heart take the microphone.

What does sizzle throughout on Afsana is the technical abilities of the classical counterpoint solos, who wail out incredible ragas and runs that are more than just ornamental pops on the score, they are absolutely foundational in Afsana. I am imagining a release where all of the backgrounds sing with the passion of these leads — that would really give Dhamakapella true crossover credibility. To this note, please be amazed at the male lead on I Need Your Love. Suddenly we're listening to a masterclass.

I still believe Dhamakapella's strong arrangement vision (currently deftly led by Shaunak Roy) will carry this group to many more successes. We just need the edge to carry the currently muted backgrounds into the foreground.

There's not a lot to an album of this length. Therefore, let's dive right in.

Madness / Phir Le Aya Dil is an interesting piece. The challenge to a number based around Muse's original is that the song is incredibly repetitive and focuses on the build. Therefore, arrangers Shaunak Roy and Chase Strom opted to change much of the background to have more variation. While this keeps things interesting to the listener, the track loses some of its impact. The climactic lyrics "I need to love" are almost startling and cool off very quickly. There needs to be a more significant level of growth across the song — it begins almost as quickly as it ends, with minimal impact in between.

Next, Regression is an odd addition. I understand why such a piece might exist here. This album is most likely a competition set, so having a steady flow of music between all numbers is a cool idea when possible. If the songs don't naturally flow together well, a simple track such as this one helps fill that gap. However, the last two songs don't flow together, which poses the question of why the first two need to. Furthermore, if What Love Is / Preet has very little introduction as a standalone number, why not simply combine the second and third tracks? In a live performance, virtually nobody will notice. However, in a digital recording, a minute-long track that feels like a musical introduction and nothing more only hurts the value of the transition.

By the time we get to the third track, the same general issue as the first song arises. This ballad feels too static for me. The overall song is a bit loud for my taste, starting at almost a mezzo-forte. There is a minor decay in the second verse to give some dynamic depth. However, the explosion of the climax could be so much more. A good ballad is similar to a roller coaster in many ways: there are multiple builds and decays. This ballad is one large oscillation of volume, going from medium to soft to medium to loud to a medium ending. Letting the track flow more and naturally grow and decay multiple times keeps the audience engaged, as well as letting that large impact really stand out and exclaim the song to the audience. The static dynamics of this track really hinder the overall flow.

If the first three tracks were problematic for possibly doing too little, I Need Your Love / Balam Pichkari is problematic for doing too much. This number starts out soft and mellow before rocketing into an almost club-like remix of the bassline to Charlie Puth's Attention. By the halfway mark of this song, the entire groove shifts towards a more laid back approach conducive of a bridge. However, before the climax of the bridge is reached, the song shifts again to a cut-time feel that is then cap-ended with a vocal run straight out of Tori Kelly's Nobody Love. I got whiplash simply writing out that sequence of events, much less having to hear the actual product. It's unfortunate, as I really enjoy the club-style beat that is established. The number of stylistic changes that slowly delay the feel of the beat feels like a runner who hits the wall near the end of a race. The song begins to drag its feet, almost slowing to a halt before catching its breath just enough to finish. While many moments are solid, there are just too many changes, and the overall impact of the song takes a hit because of it.

Despite all of the individual flaws with each track, the overall product does deliver rather well. The soloists are great, and there are many very well-penned arrangement ideas I rather enjoy. The hardest issue with this album is that there is so little to remember. All of the flaws stand out just a little bit more because there is less material overall. If these songs are incorporated into a full length album of 8-12 songs, the issues might be slightly lessened as more thoughts are introduced by the group — then songs can get away with only having a few ideas that are well elaborated. An explosion of many ideas can turn one song into a solid statement on the album. However, when there are only four songs, the overall impact is lessened. Thus, this story feels disjointed and a little boring. I would love to see Dhamakapella release a full-length album to fully explore the group's sound. Until then, Afsana: Our Story is a small snapshot of the group. Check it out and see if you agree.

Afsana: Our Story streams on SoundCloud.