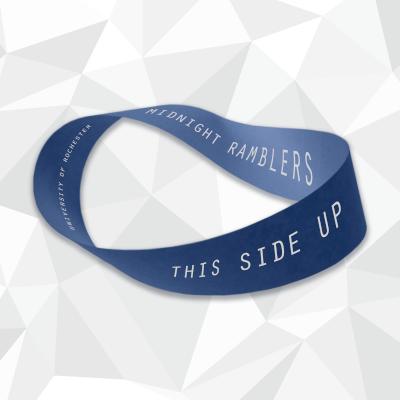 The Midnight Ramblers are back with a (deceptively) shorter release in This Side Up. The six-track album flows along without much trouble under committed soloists, and has a great exclamation mark in the middle. This puts the Midnight Ramblers a bit ahead of their peers, though won't make anyone fan themselves with unbridled delight.

This Side Up isn't really short if you consider that most of these covers are noticeably longer than their originals. This is achieved through all manner of arrangement tools at one's disposal — new intros, new outros, double bridges, dubsteps, sound effects, you get the idea. It's all of the stuff an arrangement editor would caution against, since you risk wandering too far away from melodies and a clear singalong path for the listener. However, without this risk, you're left with literal transcriptions, which is possibly more risky in the long run. And so, I'll summarize this arrangement choice by the Ramblers by saying that mostly, I find their extension-decisions entertaining.

Hey Mama sounds like a submission from any male-voiced collegiate group, until the slick and gritty rap pushes it up a notch. I'm quite fond of Only One — it's nice to hear a real baritone sliding around a real baritone range, and it's also good album programming as this piece feels like a natural progression from Hey Mama.

But oh, the album's winner! Hello is the exclamation mark I referenced earlier. Soloist Nick Kasper channels a very different Adele while his background singers sound like they're performing in a swanky cocktail lounge behind him. There's great showmanship from the lead in Death of a Bachelor (Dan Bennett) who isn't afraid to do a little warranted scream-singing. And how can you not love the strong lead from Charlie Aldrich working over a swingy, playful beat in reimagined Closer? Get the gold stars for effort ready.

But maybe a silver or bronze star for Rise. The percussion-less intro exposes shaky ensemble singing, especially on those "ah"-vowels. There are pockets of weaker blend and a general lack of note confidence in a few scattered spots preceding this track, but the intro to Rise is really under a spotlight. As the arrangement unfolds, the song doesn't strengthen as hoped because the heroic-sounding interpretation isn't that believable. The Ramblers definitely went for it on their big closer but left the bases loaded.

I trust Ramblers fans already own this one. For the rest, be sure to check out Hello.

I'd like to use an elaborate metaphor to describe this album. This Side Up is similar to getting frozen yogurt. I'm a huge fan of going and selecting as many flavors as I want. I start with a basic flavor like cheesecake before adding some fruit, a few sprinkles, and maybe some caramel on top. However, there have been occasions where I get a little overzealous. Suddenly my fruity caramel cheesecake has chocolate and peanuts. By the first bite, I know I made a mistake. There's just so much going on that the flavors stop working together altogether. This Side Up is the same way, where so many ideas were thrown into each song. Instead of having one multifaceted flavor, we are presented with sections that may work well together individually but don't work well in the overall picture.

The average length of each track on this album is almost four and a half minutes long. This caught my attention, as the average length for each original track is roughly a minute less than this. Somewhere near the end of each track, I was wondering where the end was. Consider the song Rise. This track could have ended with the percussed lip-buzzing fall at the 3:05 mark, and I would have been content with this song. It proceeds to go almost three minutes longer. In these three minutes, the bridge has at least four noticeable sections, each with its own build to a "climax" and introductions of new ideas. The outro chorus could have occurred after any of these sections, and I would have been content. Instead, after what feels like a small eternity of a bridge, we are finally greeted by the outro chorus. However, it sounds remarkably similar to the last chorus we heard. This in itself is a problem, because of all the growth that has taken place over the past minute and a half of the bridge, all that anticipation is met with a chorus that doesn't match with all that build has given. So the musical idea of the entire bridge just became pointless. If the song was going to end at the same musical idea as what existed at the three minute mark, it should have stopped there. Instead, we are forced to listen to nearly three whole minutes of musical rambling to return to that point and get a couple new chords right at the end.

I don't want to say that every track does this. Hello is one of the tracks that is just stellar. Nick Kasper performs a glorious rendition of this song as it ebbs and flows. When he is fully the front man, his soul is completely laid out for the world to see. When he is in a small harmonized group, the voices blend perfectly with him. Ben Hall has a really interesting arrangement in which new ideas connect well together and really help the overall presentation. The soloist is set up be in a place where he isn't always the most interesting thing on the track, and the use of moving parts and harmonies to paint an entire masterpiece works very well in the group's favor.

Overall, This Side Up is a cautionary tale of having too many great ideas. There are no bad ideas throughout the album. Unfortunately, by the time some of these ideas are finally presented, the song is long past when it should have ended. I applaud the men from the University of Rochester for the sheer amount of musical depth they present. However, they presented the musical equivalent of a run-on sentence. At some point, the ideas could have been separated or removed entirely without missing the point.

The Midnight Ramblers have proven they sound great, and streamlining the thoughts in each track could really bump them into that upper echelon of a cappella groups they belong in.

When I first listened to This Side Up I wasn't sure how I felt about it. On the one hand, I like the fact that the group takes liberties with the original tracks (as opposed to simply transcribing) and executes them well. But on the other hand, I'm not sure that all of the decisions work. After listening to the album a few more times and meditating on it, that mixed feeling still stands.

This Side Up opens with Hey Mama and the group really excels in channeling the high-octane nature of the original (opb. David Guetta ft. Nicki Minaj). Pulsing bass and percussion along with powerful swells and a solid solo performance by Justin Maldonado make this song a good opener.

Hey Mama is one of four tracks where the group's cover is substantially longer than the original. One of my gripes on the album is that the group lengthens the songs, sometimes substantially, and I'm not sure the added content adds value. The group extends Hey Mama from the original's 3:13 to 4:56 here. For example, the last minute of this song is a dubstep remix of the piece with the solo overlaid. Why? What are listeners getting out of it? How does it fit into the arc of the song or the group's take on the original? It might work in the context of a live performance, but it works less well in an album context. The song receives above average marks because of the group's execution of the arrangement, but I think with more judicious arranging, it could have earned the highest mark.

The album turns to Only One next. Charlie Aldrich's solo brings an earnest, tender approach to the song. I like the swells and more traditional a cappella sound of the track, which is void of vocal percussion. The arrangement isn't particularly interesting or advanced, but it is a pleasant listen and very much in line with what listeners would expect from a typical a cappella album.

The group's take on Hello by Adele is my favorite track and the best on the album. Nick Kasper has a mesmerizing voice and nails the solo. Nails it! The group actually shortens the original, while still transforming it into a more traditional a cappella song, making it easy for listeners to digest. The track actually reminds me of something the Yale Whiffenpoofs might do (but I guess the Ramblers wear baseball jerseys, not tails). Some of the rhythms in the chorus feel awkward because of the slower tempo, but other than that, this song is a keeper and a successful embodiment of what I think the group is trying to achieve elsewhere on This Side Up.

Both Death of a Bachelor and Closer fall somewhere in between Hey Mama and Hello. In both cases the cover is about 50% longer than the original. The longer airtime allows the soloists and the group to highlight their talent, but the group loses cohesion in the listening experience as a result. It is easy for listeners to get lost and wonder where they are in the song. Again, the group and soloists do a reasonable job on these tracks (the weakness is certainly not from a lack of talent), but the arranging decisions are questionable.

Rise is the final track on the album and has an anthem quality to it. I love the power of the background and soloist (Justin Maldonado's second appearance) on this track. The group may have gone a little overboard in the last two minutes, making it emblematic of some of my criticisms of the album overall and making the song feel disjointed, but it's a good closing song choice.

The Midnight Ramblers have a good shtick going. On future albums it would be good for the group to show more discipline in arranging. The Ramblers are clearly a talented group and This Side Up, despite its flaws, is worth a listen.

This Side Up also streams on Spotify.