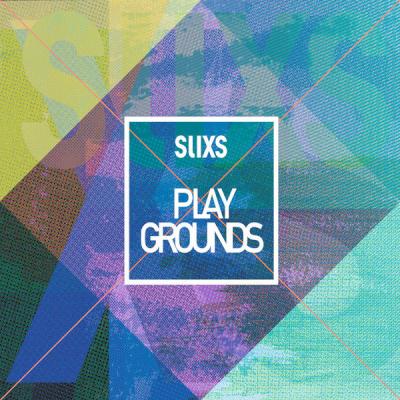 SLIXS has put together a great album of what I can only describe as throwback modern a cappella. At its best, Playgrounds reminds me of late '90s groups like KiCKSHAW, Five O'Clock Shadow and m-pact. For me, this album fits right in that continuum, while also having its own sound and style as you'd expect from a group in that weight class.

The slow funk of Just You may be my favorite track on this release, although I also like the edgier and more distorted explorations of Is It the Rain and Jasmine Flower, which both feature fun manipulated bass lines. The vocal erhu on Jasmine Flower is a step off the beaten path and I hope the group performs this composition with respectful homage to the musical tradition that inspired it.

SLIXS is most successful when solidly in the rock and jazzpop sphere. The ballad cover of David Bowie's Heroes is pleasant but not anything you couldn't hear from any number of U.S. college groups. Meanwhile the more choral Shall I Compare Thee to a Summer's Day is a lovely composition performed in a way that highlights the group's non-native English and (at least as on display here) non-choral singing- and production-style comfort zone. It really is a nice piece so I'm glad SLIXS included it, but at the same time it doesn't gel with the rest of Playgrounds.

Michael Eimann is the clear hero of these Playgrounds. He wrote everything but Heroes, did the arranging, and seems generally to have had the vision that brought this album in to being. As a body of work, it's a pretty incredible effort. As a performance, he's greatly aided by the five other singers with whom he's collaborated. According to the liner notes, the lineup has been together for a decade and sung everything from McFerrin to Bach. Certainly, these voices sound great together.

SLIXS has poured its heart and soul into this recording and has excellent results to show for it. If you're thinking you haven't heard an a cappella rock album in a while, this one is for you.

My friend Marlin Williford, who as of this writing was a contestant on The Voice of Germany recently said that there are so many fantastic singers in Germany, but you really don't get to see them as there aren't a lot of opportunities to. Which is why I'm so thankful that talented singers still make recordings, because the world would be a much darker place without a little SLIXS in our lives.

SLIXS is an amazing group. From the day I first heard its cover of Sign 'o' the times in 2013, and When Love Comes to Town in 2007 by the then-named Stouxingers, I've been a fan. Something about the quality of this music and musicianship is captivating — no, mesmerizing. To me, such is the same with the 2016 release Playgrounds. Some of the tracks are so mood-altering and bodily invasive that it takes me a long time to get back to "normal". Is It the Rain, Jasmine Flower, and Shall I Compare Thee to a Summer's Day connect on a visceral level, that song that you didn't know you needed until it was halfway over and you had to start it over because you couldn't bear the exquisite pain of hearing it end just yet.

But I also get that this group is not for everyone. SLIXS has a unique voice and sound. And the recordings are often bright and buzzy. Often, a song may be arranged to where the emotional arc and timbre of the individual voice are so much more important than "group blend" from an intonation standpoint, but the overall cohesiveness is impeccable. There is a sparseness of sound at times that is caused by the pared down jazzy aspect of lots of these songs. Just You is a great example as the group really just lets the six voices carry the full weight of the track (with the occasional muted brass imitation). If you are only accustomed to tons of processing, this isn't going to be the track the group could use to win a listener over as a fan. But win you SLIXS will with any number of other tracks on the album. The group bills itself first as a jazz group influenced by pop, world music, funk, and classical music — a combination affectionately known as "vocal bastard" according to its website. In fact, the group's last album was comprised solely of vocalizations of music by Bach and was called, appropriately enough, Quer Bach.

What one cannot deny is the talent and creativity of both the band and its leader, Michael Eimann. This is especially true when it comes to penning original soulful ballads like Is It the Rain or eclectic jazz like Jasmine Flower (based on a Chinese traditional song!), or creating anthemic covers like Heroes. Eimann does it all, SLIXS does it all, and does it beyond well, probably masterfully.

Before ending, I have to call out Shall I Compare Thee to a Summer's Day for a brief moment. I love it, but I hate it — not really — in comparison to the version I sang several times a week in a regional premiere of Shakespeare in Love. I loved singing the Bard's words nightly, and I get that same feeling as I did then from the members of SLIXS — it's a passion for and appreciation of the language and rhythmic virtuosity of the source material.

If you dig SLIXS's sound, you'll want to frolic in this playground all the time.

Here's proof that changes can be a great thing. With a name change along the way and a few personnel changes, too, SLIXS is celebrating its tenth year with a bevy of original compositions and a timeless cover on Playgrounds. SLIXS sounds absolutely fantastic and represents Germany very well.

Playgrounds is more of a long-play creative collection of vocal music than individual tunes. And it's all penned, arranged, recorded, and produced by the group's mastermind, Michael Eimann. The amount of work here could easily be one's life project, but with the exceptional quality presented on Playgrounds, let's hope Michael Eimann is far from done. SLIXS defaults to a sort of freestyle funk frequently, presented at the top of Playgrounds with Jam in the City. I get the impression that this freestyle funk approach turns into organic improv at live shows, relying on the musicians to lay down that day's version. You'll also hear the group's unique roster through Jam in the City: five male voices and one red hot female voice that deliciously cuts through the other lines like a jouster lunging with a lance. Next, get a warm bath in laid-back vocal jazz with well-controlled vocal trumpeting in Just You before the group's signature funk comes back in a kaleidoscope of sounds in Come On.

There's a marked shift to a new segment of Playgrounds when Is It the Rain begins. First, we hear throat singing and lots of it, wonderfully tangling with the vocal lines. Also, the lyrics — paired nicely to the music throughout Playgrounds but often a bit cliché in meaning — have a more pointed impact here: "I'll compose you a garden of immortal chords / In which you are the flower and I'll be the rain ...". This song, a true soundstage for SLIXS, is best described as "a cappella bliss". And the song doesn't firmly end, hanging on a bit to spill into Jasmine Flower thematically with continued throat singing and an invitation for something a bit animalistic to take over with jungle sounds bumping up against classical scale-driven motifs in a wordless track. Here, too, the group could give us a new Jasmine Flower with each performance.

On the back half of the release, it's the cover song that really pops for the listener. It's clear that David Bowie's classic Heroes really resonates with each member of SLIXS as it's so sensitively interpreted and delivered. We're also treated to the powerful voice of Katharina Debus front and center on That's When It's Love when she takes the lead microphone before Playgrounds wraps up with another wordless groove fest.

Playgrounds is definitely worthy of your attention and repeat spins.