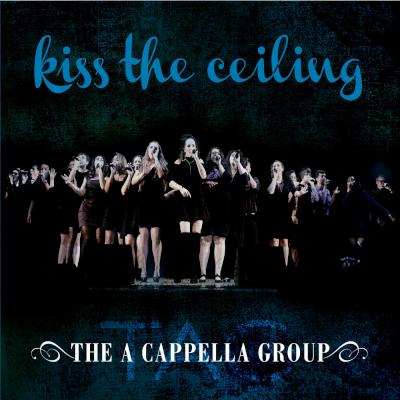 Kiss the Ceiling is another solid release from a high school group who still keeps the Floridian beat, hurricanes and setbacks be darned.

This release was delayed when school was cancelled for three weeks after Hurricane Irma rolled through Florida. I'm sure you can understand how wild and disruptive that must have been for Cypress Lake and scores of Floridian communities. But TAG albums are worth the wait — few groups encompass the upbeat, hopeful, downright cheerful vibe of determined, optimistic youth quite like TAG does. You can hear it and feel it in every song — while many young vocal groups are embracing all-angsty set lists, this ship is still upright and headed toward a pink horizon. It's refreshing and really needed.

Along with the right track list, the soloists remain strong and inspirational. My favorite emotionally-driven song (Xo) also features my favorite lead, Kennedy Floethe. This gal lays down a bold and snappy solo, adding outstanding ornamentation with her vocal flips and runs but still landing on the center of each pitch. She's obviously put the time and effort into developing her instrument. My favorite upbeat jam is Expensive — love the sizzle and punch the whole group drums up for this one, lead by a totally committed Ryleigh Plank.

Unfortunately there aren't a lot of nuances present in the way of varied dynamics and tone in the backgrounds, and I'll place a lot of this on the production. There's a super elite team shaping the sound here, and I liked this team's work the last go-around, but the audible choice now — more so than on any other TAG release — is a compressed, ultra loud bass with heavy auto-tuning across all the background lines. It's so processed and so different from the lead lines that it often sounds like two different songs in one, and that makes it hard for listeners to both engage with the power of the performances and hear all the intricacies of the arrangements. You'll hear this sonic template immediately in the opener Animal Spirits, and it's pretty much there in a similar degree throughout Kiss the Ceiling. I'm the most hesitant about the production in Empress, because the group likes this song so much the liners urge us to read the short story it's based on, and this song also contains the "kiss the ceiling" snippet the album is named for. But also, the effective razor-thin harmonies all over Empress lose their impact when presented so mechanically. Others will find this album-wide treatment clean and consistent, so take my opinion as you will. RARB is also tasked with comparing a cappella against itself, and I happened to review OneVoice's latest must-hear release Elemental just prior to reviewing TAG. I want TAG to stay distinctly TAG, but an additional editor could go a long way toward enhancing what works and rethinking the rest.

And yet, we come for the kind of promise only teen singers can deliver, and that's offered with a bow in Nothing More. This line in particular: "we are how we treat each other and nothing more" makes me so delighted that these singers are making music together and sharing their gifts with the rest of us.

Fine technical singing abounds in Kiss the Ceiling with a subjective production presentation. Come for the dazzling leads and stay for the heartwarming songs on display.

The A Cappella Group continues its tradition of exceptionally-recorded and -produced pop covers on its latest, Kiss the Ceiling. This group is certainly thoughtful and consistent about its aesthetic: again, they've sourced a number of arrangements from Tom Anderson, with recording/production from Liquid 5th.

The result is an album that sounds quite similar to the last few of the group's releases: bright, shimmering pop songs, performed impeccably and with lots of energy. As a result, there aren't a ton of surprises here: if you're familiar with TAG's aesthetic and the originals chosen here, you'll know what TAG's covers will sound like. That predictability doesn't make the album any less enjoyable, though: Expensive, Stay, and Tears all sound great; there's something rewarding as a listener when hearing well-performed songs even if you already know what they will sound like.

TAG does have a few song choice surprises with the throwback I Wanna Dance with Somebody and the Mexican pop song Dueles; both are performed beautifully and fall outside the group's contemporary American pop wheelhouse. Most thoughtfully, the song Empress is inspired by a Kurt Vonnegut story, and the album's title comes from a lyric and moment in the story. In the liner notes, the group draws a comparison between the lyric/story and their own drive to achieve greatness — a nice peek into TAG's goals as a group.

As an aside, TAG's liner notes are usually as impeccable as their vocals, but there are a handful of careless errors here (a linebreak in the middle of the word "The", a mis-spelling of the artist Jesse and Joy). It's a tiny crack in TAG's otherwise exceptional armor.

The most memorable and heartfelt performance on Kiss the Ceiling is not one of the shimmering (but ultimately interchangeable) pop songs; it's the beautiful ballad Nothing More that closes the album. It's a gorgeous arrangement (another Anderson contribution), it has a beautiful lead (Dana Miller), an intricate and peppy bridge, and dynamics that build the song up and then draw it back down to a moving closing. That brilliant display of emotions — both from the lead and from the pacing of the whole song — is how TAG can kiss the ceiling with its future recordings. Kiss the Ceiling sounds great and is fun to listen to, but conveying emotion and taking the listener on that journey is where TAG's greatness is found.

Kiss the Ceiling is the next installment from The A Cappella Group of Cypress Lake High School. The group has the album production process down to a science, with veteran arranger Tom Anderson arranging all but one of the songs on the album, Gary Stroh directing, and Liquid 5th providing the editing, mixing, and mastering. This support system allows the group to thrive and establish a high-quality sound throughout the album.

The first four songs carry the album. Empress and Expensive impress me in particular. Empress, the album's third song and inspiration for its title Kiss the Ceiling, is originally by The Arcadian Wild. This is my favorite song on the album. Mark Scheme does a beautiful job with the solo — he is earnest and technically superior. The background immerses with swells and atmospherics that has the ability to emotionally move listeners. The arrangement has enough texture that it is not boring, but not so much that it distracts listeners.

The group follows Empress with the upbeat and high-energy song Expensive. Ryleigh Plank comes in with an explosion of energy. Wow. She is present and approaches the solo with the attitude it deserves (those belts!). The background vocals are there with her and provide the same intensity and excellence, which not all groups pull off.

The other tracks are still good, just not as good. I love the production on the intros of Stay and Xo. Cody Vagle is a perfect fit on Diamond Dreams, and I hope I can listen to more of him in the future. I like the inclusion of Dueles on the track list. I also think the album's closing song, Nothing More, is well placed (the group notes in its liner notes that it chose this song in light of the divisiveness in the country).

With that said, there are imperfections that hold the album back from perfection.

I Wanna Dance with Somebody never really gets off the ground. Holistically, the track doesn't live up to its potential. The arrangement feels boilerplate and doesn't provide enough variation or build to keep listeners engaged. It also doesn't allow the background to bring the same intensity that I hear on prior tracks. Even Ryleigh Plank, who gives us a masterful performance on Expensive, doesn't feel as invested. I was hoping for more all around on this one.

Dueles and Diamond Dreams suffer from a similar deficit. The songs are pleasant but the arrangements are average and the group can do a better job selling them. All of the fundamentals are here, but they don't wow me like some of the other tracks. Even with a strong solo performance in Diamond Dreams, these tracks (along with I Wanna Dance with Somebody) fill out the album but don't make the album.

Overall, this is an above-average album from a group that has consistently produced solid work. Kiss the Ceiling may be a mixed bag, but it's worth a listen.