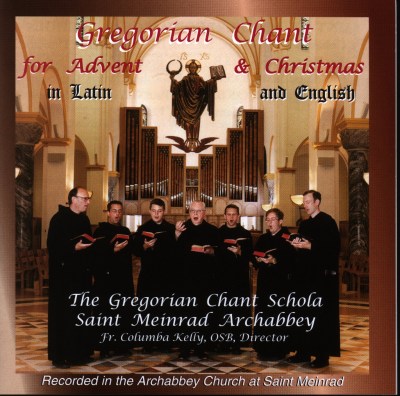 Alright, here's the pitch: seven priests, a great deal of Latin, and no harmony per se. Interested? That's okay, because this album from the Chant Schola at Saint Meinrad Archabbey answers to a higher authority.

While us reviewers usually do our best to judge each album in the larger context of a cappella as a modern, ever-changing musical genre, this album deserves special consideration. This is not your father's, or even your grandfather's a cappella. We're talking Gregorian chant here — much of it from when we counted the years using only three digits.

Now, monophony can grow awful tiresome on the ears after a while, and without any particular connection to most of the texts (just a Jewish kid from New York am I), I was less than enthusiastic about the prospects of enduring an hour+ of religious chant. In the end though, it wasn't all that difficult. Pay particular attention to the original compositions on tracks 8 and 23, as well as the medieval hymn on track 14 — not so much that they are performed better, but their responsive forms and somewhat more delineated cadences make them more listener-friendly for the modern ear.

Can I truly judge this music beyond the mere aesthetics? Well, frankly, without being an expert, probably not. But I can consider some of the elements which make any music worthy of a good listen: Diction, intonation, dynamics, setting of lyrics. In these respects, the hour's worth of Introits , Antiphons, Proclamations et al (I'm getting in the Latin spirit!) are performed serviceably. I say "serviceably" because despite my lack of expertise, I can point out that the high end vocals don't quite match the confidence and richness of the lows, the consonant diction needs a little work, and the cutoffs could be tightened a bit. Nevertheless, special kudos to the engineers who have managed to capture all of the overtones and echoes produced by the live recording in the abbey.

Do you need this CD? No. Will you listen to it more than once? Unlikely. But if you really want that comprehensive a cappella collection, you need a good Gregorian chant CD, and what the heck, this might as well be it.

There is something to be said about "going back to the roots" of a cappella. Saint Meinrad Archabbey's Gregorian Chants for Advent & Christmas is beautiful and haunting recording. The wonderful liner notes detailing the history behind Advent, the Saint Meinrad Archabbey, and the music performed on this disc are a great read for those unfamiliar with it. That the music was actually recorded in the church itself only adds to the magical, awe-inspiring mood created by the performance of these pieces.

However, there's also something to be said about the fact that I had the darnedest time listening to this album all the way through. And that was the least of my worries when it came to reviewing this album. My inexperience with the genre definitely played a major role in the fact that I couldn't differentiate one song from another. ("What?! We're on track 3 already? I just started the CD!" "Can I get a melody? IS there a melody? Or is that not done in Gregorian chant? Help!") It probably didn't help my already confused mind when I discovered that each of the antiphon's started out the same way (tracks 1, 3, 5, 7, 9, 11, and 13). Additionally, the seemingly limitless amounts of reverb created by the church recording made it supremely difficult for me to make out the words being chanted. You can only imagine what it's like trying to give individual ratings to songs on an album where you can't tell if the melody has changed (therefore cueing you in to the fact that a different song is playing), or if the singers are now performing in another language (therefore cueing you that another song is playing), and the tempo does not change from track to track.

Now I'll admit to you again, I am probably just an idiot who doesn't know good Gregorian chant from bad Gregorian chant, but what I can tell you is that this music will give you chills down your spine, and if you like haunting spiritual music, this is a great disc to try out. However, if you're like me and you prefer to have a little variation in your albums (you know, songs in different tempos, songs in different keys, songs that have differentiable melodies), then you might want to pass on this one.

The Gregorian Chant Schola Saint Meinrad Archabbey is meditative Advent and Christmas Chant. The "choir" consists of Friars and Brothers, Benedictine monks taking chant music into the 21st century. Though not immediately obvious to the inexpert listener, two of the tracks are actually original settings of new texts. The remaining tracks are traditional Latin and more "modern" (read: the last 40 years or so) English adaptations. The seven monks and their director, Fr. Colomba Kelly produce music like a gentle stream. Their sound is peaceful, flowing and though constant at first listen, actually composed of infinite subtle variation.

The art form of chant is focused largely on the interpretation of the rhythms and melodies and their relationship to the natural spoken rhythms of the original text. Nowhere is this artful balance easier to appreciate than on Track 15 where the diction is crystal clear. It also helps the non-Latin scholar that this track is in English and performed as a solo, rather than as a group piece. Sadly, the reverb and manner of recording make full appreciation of some the other tracks' musicality more difficult. The lyrics are often too obscured.

Though deserving of praise, this CD has its "issues". Aside from a few random clicks on the recording, the primary issue I had with this CD was the reverb. You have not heard an echo chamber until you've heard the Gregorian Chant Schola Saint Meinrad Archabbey. Now, I like a rich reverb on my Gregorian chant as much as the next guy, but I found this extremely long reverberance to be a bit distracting. It should be noted that the reverb is no accident; it's the authentic reverb of the Archabbey Church at Saint Meinrad. Perhaps some listeners will appreciate the sense of place and possibly sacredness that this brings. I found it frustrating.

Aside from this, the CD is very enjoyable. Obviously, a 69 minute recording of Advent and Christmas chant is not for everyone. But if the title appeals, so will the music.

I found this album extremely difficult to review. While the music was nice, it was not something that I would normally listen to. Therefore, I'm not quite sure what to say.

Each track has a hauntingly beautiful sound with that natural reverb that only a church can give you. The singers were extremely tight. Consonants were rarely displaced, and tempo changes were done to perfection. These are signs of tireless rehearsals and a good director. Attention was paid to every minute detail in the performance.

The main problem that I had with this album was trying to actually listen to the whole thing. I found that every time I put it in, I could only get so far before it was too much. Finally, I had to start it half way through in order to hear every track. Twenty-seven tracks and almost seventy minutes of music is a lot for any disc.

I also found that after awhile, it started to sound the same. It was still beautiful, but the dynamic and tempo changes became predictable and my ears stopped listening.

For anyone who truly enjoys chant, I'm sure you would love this album because it is performed so extremely well. For me, though, it will be nice background music during Christmas, but won't find too much more playing time.

This one totally caught me off guard. Never, when I was chosen to be a RARB reviewer, did I ever imagine that I would be reviewing an album with nothing but Gregorian chants on it. Where do you begin with something like this?

I found myself having trouble telling one track from another. On most CDs that I have reviewed you could play me the track now, and I could tell you the track name, but not with this one. I'm not up on my Latin to begin with, but just trying to distinguish between these tracks is very difficult. Some tracks are done in English, which is a nice change of pace for the listener, and some have solo cantors that make them more distinguishable than others. Making it even that much harder, all of the chants on this album are for the Christmas and Advent season. The one big bonus for this album is that the men in the Saint Meinrad Gregorian Chant Schola put all of the lyrics, both Latin and English, into the accompanying booklet so that the listener can follow along if they choose.

Okay, so now lets get down to the skinny on this one. It's not that bad. It definitely has some room for improvement, but its not that bad. First, I found through reading the liner notes that the archabbey at Saint Meinrad, where they recorded the CD, is one of only seven archabbeys in the world! As wonderful as this is, I think this project would have been better off had they not recorded in the archabbey. Singing in resonant halls is wonderful for both the singer and the audience, but when you record in one, you can run into problems. The sound came across very muddy because of the massive columns of reverb that echoed long after the notes were sung.

Another big problem that I had with this album is that it was sung totally monophonic. Gregorian Chants can be sung either monophonic or polyphonic, with the latter allowing a much more enjoyable experience for the audience. Back in the day, they didn't understand harmonies so when they sang polyphonic chants they sang the melodic tone and either the fourth or fifth above the melodic tone. The Saint Meinrad Gregorian Chant Schola doesn't do this at all. Instead, they sing monophonic in which all seven members are singing a unison line. If they would adapt some polyphonic music to their repertoire they would increase the enjoyment for the listeners of their album.

I would personally never buy this album, not because it's a poor recording, but mainly because I have about as much interest in Gregorian Chants as I do in moldy cheese. If you're like me, then stay away from this one. If you're a musical nut who likes to get freaky with Gregorian Chants, then I am very reluctant to recommend this album because there are better recordings out there for you to enjoy.