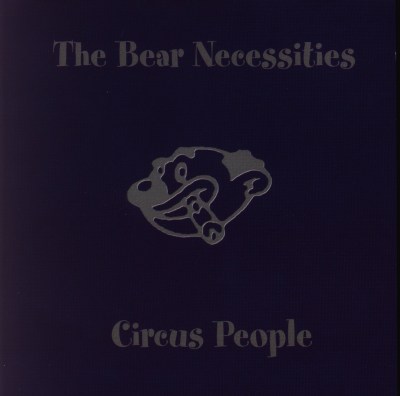 Memo to a cappella groups: good production is no substitute for good tuning.

The new album from the Bear Necessities has a nice shiny sound, engaging vocal percussion and almost no tuned chords. Come on, guys. If you can afford to make an album, you can afford to bring a minidisc player to your rehearsal and notice that your tenors are always flat. Or that your baritones are sliding in and out of the chord. Or that your soloist is straining. Or that the reverb in your Queen-infused jazz standard (Paper Moon) can't quite force your chords to lock.

Since their last album, the flawed-but-engaging The Bear Necessities Jam, the boys have taken a giant step toward the mainstream while treading water when it comes to musicality. The results are not nearly as winning as their earlier efforts: the arrangements are less creative, they take fewer risks, and they sound more seasoned but not more interesting. It is a common thread for fledgling groups, male groups in particular — although differently themed, the Colby Blue Lights also put out a lackluster follow-up to a promising debut disc.

Two good ideas save Circus People from the abyss of the irredeemable: Bear-a-oke, a demo track so that fans can take over the solo, and a damn fine original, Glass. It's a terrific song, and excellently handled. The arrangement is much more textured than any other on the disc, most of which lives in the block chord rut. Clearly its all-around coolness inspired the group to rehearse and get their act together.

I'm disappointed in this disc, particularly because the last one showed so much promise. But at least the group is still singing, still performing. There will be other chances.

The Bear Necessities latest CD Circus People, like the one that came before it, features a recording of Bruce Springsteen's Streets of Philadelphia. Their first recording of the song was an awful live recording. I gave that version a 2 out of 10. (RARB has changed scoring systems since then.) Well, if at first you don't succeed, try, try again. This time around, the Bear Necessities deliver the goods. The arrangement is gripping, the solo is heartfelt, and the production is spotless. In short, it's a damn good treatment of a damn good song.

If the rest of Circus People was as good as the Streets of Philadelphia there would be cause for celebration. Sadly, that's not the case. Most of this album is innocuous. In addition to listening to RARB CDs closely with no distractions, I like to road test them in real word conditions: I listen to them at work, on trains, while playing video games. Circus People had the tendency to drift into the background. The Bear Necessities' biggest strength as a group is that they know how to bring a good attitude and a friendly disposition to their performances. They've still got that on Circus People, but too many of the tracks need an extra boost of energy. The songs are almost a lot of fun to listen to, but they're not quite there yet. Also the arrangements are basically well rounded and the singers are generally strong, but they're just a little shy of being truly tight. For example, look at Heavenly (the perennially covered Harry Connick, Jr. number) and Pink Cadillac (by the Mighty Blue Kings). Both songs are jazzy but laid back tunes. Heavenly is sleepy and dull — end of story. Pink Cadillac on the other hand, is zippy and diverting. I know that Pink Cadillac has a lot more swing in it to begin with, but there's no reason Heavenly couldn't have been as fun to listen to if only the performance had been more energetic.

There are some noteworthy highlights. The opening track, Jenny (867-5309) is a perfect song for the Bears and they have a lot of fun with it. Jenny is also the logical song to get the "Bear-a-oke" treatment (they remove the lead vocals so you can sing along at home!). It's not as good as the Bear-a-oke track on the last album, however, because there's a tenor who harmonizes with the lead on a few lines. When the lead vocals are there, he sounds great. Without the leads, the poor guy sounds very silly. Still, it's an enjoyable listen and fun to sing along with. With or Without You is solid from note one and builds to a nice crescendo. It also happens to feature a strong solo by Tom Neely, the soloist on Streets of Philadelphia. Mark Zonfrillo dishes out some fantastic gentle snare-rolls on Walking After You. One of the album's best tracks, Glass, is (gasp!) an original song by group member Dylan Dean. Dylan wrote some clever, but unforced lyrics and he sings them with a distinctly relaxed tone. The group as a whole rises to the occasion and turns in a very tight performance that proves that the Bears have a lot of potential. I'm looking forward to the day they reach it.

The Bear Necessities' latest project, Circus People, is a solid mixture of cover tunes ranging from '80s pop to '90s artists like Tracy Chapman and the Foo Fighters. This album from cover to cover is a very solid a cappella project, but it doesn't possess any qualities that make it stand out from other all-male a cappella recordings.

First a major kudos to Dylan Dean for his original work, Glass. A very nice, driving song and a refreshing change of pace from all of the covers on collegiate a cappella albums. Now, the rest of the album.

For some reason all of the highlights on this album come at the very end. Pink Cadillac and Streets of Philadelphia are fantastic tracks. Both leads are tuned into the texture of the song and both tracks demonstrate a flawless presentation of the original. Both of these songs have everything: dynamics, energy, musicianship, and killer solos. It's no surprise that these two tracks also have the best mix on the album. I think that many more tracks on this album could've been just as good if they had capitalized on the same narrow, balanced mix.

The Bear Necessities make their trade mark move on this album by reprinting their first track, Jenny (867-5309), at the end of the album without lead to be used as a "Bear-A-Oke" track. This is a clever idea, unfortunately it wasn't in the right key for me. =(

Areas to improve on: The Bear Necessities need to address minor group intonation problems that comes with not paying enough attention to blend. I felt that there were spots on this album where they tried to cover up these mistakes with fancy production techniques or vocal effects. This just doesn't work. Those effects are there to enhance your sound, not to cover up mistakes.

The soloists on this album ranged from spectacular (Streets of Philadelphia, Simply Irresistible) to frustrating (The Promise, I'd Die Without You). Vocal percussion on this album is solid and drives the groove where applied.

This album falls into the average category when measured against the general body of a cappella music. If there is a specific song that you're looking for and it's on this album then you can purchase this album knowing that you're getting a solid recording of that song. Otherwise there is no reason to buy this album because chances are you've heard or own this sound already.

The Bear Necessities, from Brown University, won't blow you away with Circus People, but good song choices, competent soloists, and decent production put the album, and this group, into the better half of college groups singing today.

There are few out-and-out winners on this album, but some memorable numbers do stick out. Streets of Philadelphia doesn't fall into the schmaltzy ooze that drowns most renditions on this song (thanks to a fine Tom Nealy on the solo), and Simply Irresistible actually, amazingly, works. You might really dig Track 4, Glass, and think "Dylan Dean...haven't heard of him" — it's an original song, easily at home among the more standard pop hits. Finally, Pink Cadillac just nails the feel and tone of the original, without doing much else, but on this album, that's enough.

Finally, the Bear Necessities do what I've always wanted a group to do: slapped on an encore of an earlier track, but this time without a lead vocal: Karaoke! Or in their case, "Bear-A-Oke" (hey, I'm just quoting the jacket!). It's good for a laugh, and damn if I didn't sing along (eight six seven five three-oh nigh-ee-igh-een...!).

A decent effort, not ground-breaking, but something to be proud of. Pick it up if you like their live show and want a memento.

Circus People is one of those albums that ends up with an average score not because it's average, but because there's no other way to express the highs and lows in a single digit. It features some great soloists, but others aren't up to the job. Some tracks are adequately tuned, but others shouldn't have been released without a few more takes. The beginning and end are strong, but there are some real duds hiding in that graveyard between tracks 6 and 11.

All seems well early on. Matt Garrett and Wick Shreve help lift Somebody to Love and Walking After You well above the college standard, and give a strong lead-in to Dylan Dean's solid original, Glass. College groups always win points in my book by writing their own songs, and this is one of the best (if wordiest) college originals I've heard.

Unfortunately, a few songs later, things start to unravel. Simple, chord-centered arrangements like Heavenly and The Promise leave no room for the kind of tuning errors that trouble them here. The soloist on With or Without You is straining out of his range, but the guy "oo-ing" above him is so agonizingly flat that I'd be reaching for the skip button anyway.

Further, throughout the album, the separate tracks within the songs often don't fit together quite right. Sometimes elements are ever so slightly out of tune or sync with one another; sometimes the mix and balance are to blame. It's especially noticeable in songs like All I Want and I'd Die Without You, where the lead and harmony soloists sound like they're singing in different states.

The CD swings back into focus for the last three tracks. Shameless a cappella junkies like myself may get a kick out of singing along to the Bear-a-oke number, which is just Jenny without the solo. A final set of brownie points goes to the Bear Necessities for crediting everybody and his dog in the liner notes. Identifying finger-snappers may be overkill, but better to err on the side of inclusion; instrumental mimics, percussionists, etc. so rarely get their due.