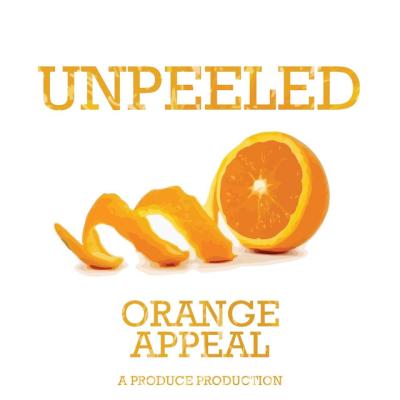 Orange Appeal's Unpeeled is by no means unappealing. This all-male group from Syracuse, New York, has a charm that is undeniable. There is a sense of fun and play in this group's music that is infectious. Each song is like a mini adventure. There's a familiar hook to hang your hat on, but the experience will be unexpected. From a lounge singer rendition of Toxic to a Beatles tribute in You're Welcome, there is interesting stuff throughout this album.

Sometimes the musical tangents get a little distracting, and there is a uniformity to the backgrounds that manifest in block chords, but somehow it all seems to work. If I were to give one suggestion, it would be to pull back on the mash-ups just a bit. A good portion of this seven-track release has mash-ups of some kind or another. But even so, Orange Appeal has a clear sound and identity that is as refreshing as a glass of freshly squeezed orange juice. And I want to give special props to the tasteful percussion throughout the album — it gives depth that would be sorely missed otherwise.

This is a great addition to any a cappella collection, and truth be told, after hearing it, I checked out other Orange Appeal music and was not disappointed.

There's something for all kinds on Unpeeled; nostalgia and new, Britney to Disney, plus the attitude this group communicates that makes for a massively fun product.

The biggest strength is the mixing — it's rare for me to hear lines as cleanly as they come through on this album. The basses in particular are given the golden treatment. It's perhaps a testament to the range of this iteration of Orange Appeal that Liquid 5th didn't have to fuzz the edges to make the lowest notes stay in tune. On top of that, the percussion pops and still maintains its human element. Props to Giacomo Guida, Josh Bain, and Steven Szachara for their vp vocabulary and giving the mixing team clean sounds to work with.

The soloists are pretty solid across the board. Each of them makes a pretty clear effort to put the song into their voices instead of attempting to copy how they've heard it before. Particular shoutout to Brad Meader for his take on Where Are Ü Now, which he takes the time to roll effortlessly through. That said, there's a tendency on a few songs to attempt to hold some phrases just off the downbeat to make it different, which is fine, but when it's on a track instead of in a live room, it sounds a little weak. The difference between the pulse you get from a live performance and singing with a clicked recording going in your ear is more noticable than you'd think.

There are a few mashups in this project, and I'd say the success is 50/50. Weight in Gold and You're Welcome do a pretty solid job of incorporating the other songs smoothly, but the Bieber mashup is a little more abrupt with its shifts, and it makes the concept a bit unclear. The Marvin Gaye compilation isn't bad, but it doesn't punch the points out clearly either. If anything, I would say this album could use fewer mash-ups overall; I lose a sense of what a group is truly capable of when I don't get full pieces. On the other hand, they're fun. Which, again, is the big draw of why you should check out this album. You're Welcome segues in a key change with the background voices indicating it through words before it happens. You can't help but chuckle, because the tricks aren't secret or precious, they're in your face and inviting you to share the moment. And that's what this should be about! Sometimes we get so caught up in how good we are at making this art that we forget that the audience wants to have something accessible they enjoy just as much as they want a technical show off.

Orange Appeal loves what it does — and that's what makes this release so worth the listen.

The yearbook album is one of the oldest and most beloved traditions of collegiate a cappella. Every few years, the group goes to the studio to press the Save button and have a memento of the times they've spent together. I've never really found this style of album to be anything earth-shattering. Rather, it's more synonymous with a rite of passage. With Unpeeled, the men of Orange Appeal create a musical memory that's simple yet fun.

I have and always will hold the belief that without energy and passion, music is merely notes. This notion permeates throughout Unpeeled. For the majority of the album, the energy is mediocre at best. In the song You Are So Beautiful, the song operates in an incredibly limited dynamic range. With the song fluctuating between a mezzo-piano and mezzo-forte for its entirety, there is no climax within the song. Even with a handful of colorful chords and one very well done arpeggiation, there's nothing that hints at the group being excited about the song. The energy is stagnant at times, becoming the musical equivalent of a student dragging his heels on the way to his least favorite class.

To further prove this point, consider Let's Get It Healing, Sexually. This song is fun. This song is just dripping with charm. The opening may be a little cheesy, but it's still well presented. However, when the uptempo beat kicks off, you can hear the smiles through the speakers. The group is bouncing and just having a great time. The shift in dynamics at the bridge is exactly what I want to hear. The build is exactly correct. My only wish is that the rest of this album had the same feel that permeates through this number. It's a bright spot of excellence in an album that is otherwise uninspiring.

With Unpeeled, Orange Appeal has proven that the ceiling is high for this group. This yearbook album shows that the group can have a lot of fun when it wants to, and the fun is infectious. However, when the fun isn't there, the album is just another one for the pile. Enjoy this album for the few shining moments that exist, and hope there are more in the next yearbook.