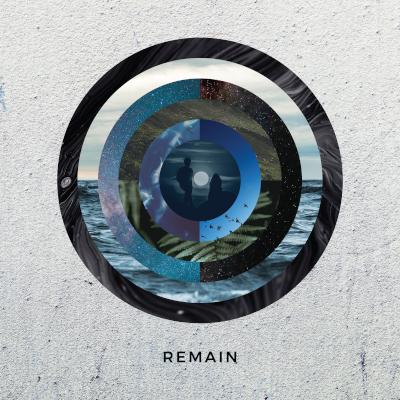 Psalm 100's prior releases have been favorably received at RARB. Not only did Psalm 100 post solid scores, but commentary described former efforts as "rock-solid", "lush", "spellbinding", and "brilliant", with "intent" that is "unparalleled". Coupling one's strong faith with one's strong musical talent should produce another inspired result for listeners, but I'm just not feeling it enough on Remain. Maybe I'll be the outlier in the three-reviewer mix, but I'm struggling to connect to Remain.

In Remain, the singers often sound hesitant. The backgrounds especially don't rise up to engage or entertain the listener. If not for a few leads amping up these pieces, Remain would have even less conviction in its delivery and effectiveness. Opening track Me & You not only demonstrates the ensemble's hesitation in singly boldly and confidently, but the track sounds a bit too constructed through production. Maybe there were too many musical misses and voices had to be manually realigned, or maybe the producers felt it needed tweaking to create more depth, but it's not a very convincing, wait-til-you-hear-us start. The vocals regain strength through leads Stephen Rich and Kayla Rutledge in Make / Come Thou Fount. This energized duet is pushing the song along — truly leading — and the voices complement one another wonderfully. Wish this fervor was the norm on Remain.

Arrangements often hinder what potential the background voices could bring forward. Want You Back features busy but uncreative backgrounds, and when paired with a lead line that's rather repetitive, there just isn't much resonating. Addict with a Pen could use editing on its climax — I'm yearning to hear soaring voices that take us somewhere decidedly new, not simply a bit more aggression through firmer diction and syncopation. It Is Well is very soothing, but doesn't take us deep enough into a musical experience; being soothed isn't as memorable as being moved.

Yet certainly even more leads deserve praise for their fine work bringing their parts to life on Remain. The palpable vulnerability Nathan Funderburg brings as he speak-sings his heart out on In the Blood is quite compelling. Funderburg's is a unique voice, coupled with a lyric refrain that sticks with you: "Will it wash out in the water, or is it always in the blood?" Then there's the red hot vocals of Nicole Powell, Carlee Powell and Anna Hostetler harmonizing on Wind. These are the voices I've been waiting for on Remain — great, edgy vocals that pop the score so hard a listen's attention is absolutely demanded.

Lastly, we finally hear some ensemble pizzazz in the rock-esque closer, Defender, a track that sounds refreshingly modern and boldly sung. This is Psalm 100's finest work on Remain, and easily transcends across "genres" of a cappella; not simply "Christian rock", so much as good music for all to enjoy.

There are moments of interest in Remain, but the hesitancy heard in the backgrounds to independently own parts, coupled with arrangements that could use more sophistication results in a fairly average release this go-around for Psalm 100.

There is power in honest, emotive, and well-crafted music, and Remain is a wonderful example of that.

Psalm 100 from the University of North Carolina at Chapel Hill has advanced to the upper echelon of really great collegiate-level music with its latest release and I am convinced that this music could stand toe-to-toe with even the pros. Having reviewed the group's last two albums, there's a progression that is felt with Remain that's more than just artful, it's downright spiritual and soul moving.

For starters, there's absolutely nothing missing from Remain. Variance in song selection, check. Tight harmonies and blend, accounted for. Soloists with depth and range, it's all here. But most importantly, there's an electric energy that cannot be denied in the group's emotional and purposeful singing.

From the jump, the singers of Psalm 100 let you know what they're all about with Me & You, a vibrant and poppy track that feels like southern soul. The production really pops in this rhythmic arrangement full of positivity and life as both bass and percussion work in tandem, allowing all the other voices to simply be fun and stylish.

And this is a key aspect and common recurrence of Remain: its cohesion.

Psalm 100's blend and balance is sensational, which can be heard especially in songs such as Want You Back and Wind. While these songs couldn't be more diverse and distinct, the ability to captivate and astound the listener is present with both. Want You Back has a great deal of cool and stylish backing parts which are fun and further enhanced by the group's trust in one another to execute on their individual parts, which in turn showcases their ability to act as one.

Wind is heavier in tone but features one of the most stellar female trios you've ever heard, who can sell a story with conviction and power. Not only this, but the backing group literally matches the leads in control and energy, never overselling a moment.

Another element of Remain that will no doubt surprise you is the depth of its soloists. Addict with a Pen will literally floor you with two amazing leads, one being a sincere male lead solo who attacks big notes with confidence but also with an impressive rap lead whose flow is utterly emotional and very reminiscent of Lin-Manuel Miranda.

56 also features a breathtaking female soloist who really brings the spirit of Remain full circle as she sings with grace, beauty, and elegance through careful pacing, making you believe that it is all for a higher purpose.

There is something inexplicably remarkable about each track on Remain. By the album's end, you're left feeling a peace that confirms that Psalm 100 sings with every fiber of its being and wants listeners to feel uplifted and full of joy. The music is profound, dynamic, and needs to be heard!

Remain is the type of a cappella album that I remember listening to some ten years ago and I'm surprised to declare that I'm still enjoying albums with this sound. The materials from which the songs are based on this album seem to stay church-friendly. To be honest, it's quite limiting for groups to present these songs some other way — the advantage of this is basically having palatable performances no matter what.

Me & You, Make / Come Thou Fount, and Want You Back are positioned as early album tracks and give me a false impression of what to expect from the whole of Remain. I thought the rest of the release would sound bland and too familiar, but I was wrong to judge so quickly. Me & You is indeed a familiar tune with the same groove and feel as the Jackson Five's I Want You Back, which concerns me — songwriters actively seek potential violators of their copyrighted intellectual properties.

Grace Alone starts loud and I find myself turning the volume down a bit. From this track onward, the album starts to sound more interesting. My top picks are Wind and It Is Well, where the group is utilized in the arrangements very well. Maggie Fahey's solo performance is driven by the clarity of her voice aptly reassuring the listener that "it is well". Wherever I Go as presented by soloist Gilson Kingman is a take it or leave it situation — I don't find myself reaching for the repeat button with this track due to its incredible amount of repetitiveness.

And lastly, the album closes with Defender, which is one of those songs I remember hearing in worship concerts during my teen years. It's also a smart way to close an album. I thought I'd hear yells, whistles, and crowd claps at the end.

Current Psalm 100 fans will be very delighted to hear this studio album. However, I can only handpick a few songs on this album that I want to listen to again some other time. Psalm 100 has yet to prove that the basic acceptable flavor of Remain is just a sample of what this group can do.