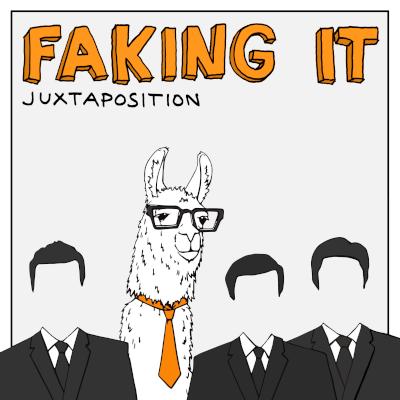 The latest EP by Virginia Tech's Juxtaposition is misnamed. The group called this recording Faking It and it is anything but. Nearly six years since the last time I'd heard a full recording from Juxtaposition for RARB (dang time flies), I realize that I've sorely missed this sound.

It's a sound of exuberance and it's chockablock on this album. As I said in my review of 2007's Anamoly: "...the members of Juxtaposition have a lock on what they do, and they do it with aplomb. Every track executes their talent and the 'juxtasound' with a mastery that was every bit worth the wait."

On the one hand, Faking It is the natural continuation of this technique. The production by James Gammon and Dave Sperandio has provided a bright, buzzy, and boisterous soundscape for the listener. This fact leads to the other hand (the not so pleasant part for some folks). Here are thoughts also taken from my aforementioned 2007 review: "The 'juxtasound' is really great, but it's a wall of sound that can get really boring on the 10th listen to the album. There are not a lot of dynamic shifts in the backing vocals. Just this never ceasing sound. Even the delicate ballads seem forced at times." The saving grace this time around is the length — at only six tracks, Faking It is literally half the time of the previous recording.

The EP also succeeds on another level: it's an exceptional reflection of the various styles in which the group is adept at performing while still remaining firmly juxta. From pop, to religious, to campy jazz, r&b, electronica, and traditional choral music, the guys succeed far beyond what this hodgepodge of a tracklist dared hope to achieve. Other than Couch Potato, which is a little too smarmy for me, and Hitchhiker, which starts to sound a little tinny after a while, each track elicits an "Oh wow!" upon first listen.

Faking It is both complex and simplistic, taking the less is more approach in arranging styles and amping up the technical proficiency. Four of the six tracks are by alumni of the group, so there is a deep connection to the material that is evident in performance.

If this is the group faking it, I can only imagine with the next recording (possibly called Real Deal?) will regale us with as an audience of eager listeners. W00!

A six-track EP that runs surprisingly like a full album, and that's well-sung, well-programmed, delightfully engineered, and easy on the ears. The leads are storytellers, and there's an original piece, too. Juxtaposition gives us more to admire than what's typically possible in an EP format. That's not Faking It, gentlemen, that's making it.

Faking It is a satin sheets and fondue type of release: smooth and delicious. All six tracks fit into the general r&b realm, some a bit more spiritual, or a bit more pop-leaning, but still in the realm. The opener Scared to Be Lonely effectively demonstrates what Juxtaposition does best: puts the right soloist out front, and uses an ensemble sound behind that has an effortless coolness. No one is screaming and attacking notes on Faking It; it's way more chill. It's a vibe. It's an attitude of confidence.

River (the song by Leon Bridges) demonstrates that Juxtaposition can handle contemporary soul music, too. Brandon Rogers, who typically serves as the drummer for Juxtaposition, shows he can do more than create smooth grooves in the back row as he leaves the vp post vacant and lays it OUT as the soloist. 2U provides a necessary mid-project shift with an uptick in tempo and intensity: someone was thinking about tracking, as this one is followed by the requisite fun piece, Couch Potato. This song is so vibrant and present. This is the happy group you'd want to just jam with on a causal Sunday, you know?

Nearing the end, we receive the EP's original, In The Real Early Morning by Jacob Collier. It's a wistful, poetic, tug-at-the-heartstrings piece, both in music and in word. That this piece fits in well amongst the rest of the album's full-time professional songwriters is a strong nod to Collier's talent and vision. Lastly, we swing back into lighter fare for Demi Lovato's Hitchhiker, which is capably delivered with bouts of impressive falsetto from lead Austin Reddin to capture Lovato's intentions. Honestly didn't see this working so well, really glad it does. Would I have preferred a louder, light-em-up fireworks song to close out Faking It? Possibly, but the cohesion of this EP never waivers — it's good from top to bottom and all points inbetween — and that's really tough to do.

I'm pleased! Give refreshing Faking It a spin and see if you agree.

When it comes to faking it, there are very few groups that are as well-known for it as Juxtaposition. The men of Virginia Tech have a strong history of recorded a cappella that has made a half-dozen Best of Collegiate A Cappella albums over the past decade, including works from this release. However, when it comes to Faking It, this album feels less like a really well-executed counterfeit of an original, and more akin to a student simply trying to pass a class while doing minimal work.

Overall, a lot of this album is monochromatic. The sound is well-delivered, peaceful, and dark, but many of the tracks lack a sense of drive. Consider River. Brandon Rogers gives a silky-smooth and soulful delivery that really transports the listener. However, I would consider this track to be less like a river and more like a gentle stream or a babbling brook. The song flows well, but has very little power. The chords and rhythmic patterns are very repetitive. The background vocals reveal so much about this track: for all parts except for the outro, most of the backgrounds utilize either "ooo"s or humming. There are no significantly noticeable dynamic changes, much less a climax to this number. As a one-off track, I can understand why this might be on the album, but this is not the only song to do such a thing. Most tracks are similar, containing one level of volume and intensity for the majority of the song.

2U is the most in-your-face track on the album. However, song selection is a large challenge for the group, and one I feel the singers did not overcome. Any number with a heavily digital-sounding original is bound to be a challenge to change into human vocals. Therefore, groups that are successful in presenting a track such as this either drastically change the song in the arranging to remove the digital element, or elect to heavily alter the voices in the recording studio. The group chose the later, but it wasn't enough. It shows in the lower bass and baritone vocals in the pre-chorus and chorus sections, notably through a dark yet discernable "wah wah wah wah" syllable. It feels awkward to listen to and creates choppiness underneath almost glassy chords in the upper voices. Simultaneously, there are parts in the second verse where the voices are so heavily digitized around the 1:15 mark that I can't tell what the original syllable was. If that digital sound was added in place of the "wah"s, the subdivision would be cleaner without overpowering the upper voices. There have been many successful recordings by groups (including Juxtaposition for The City in 2014) that are very digitally altered to get the right impact. However, there have not been many tracks — if any at all — that have been fully successful at sounding digital with minimal altering.

However, for all the arguments I have with this album, there is a hidden gem —  In The Real Early Morning. Bryson Baumgartel arranged an absolutely beautiful display of dark and pensive chords. Nick Robinson solos on this track, telling a story that feels like sitting on the porch of a farmhouse in the middle of nowhere watching the sun rise. As this track goes on, it subtly builds and decays, letting the story naturally flow. The balance on this arrangement is absolutely stellar. The high vocals have chords that reverb just slightly to leave a shimmering effect at the end of a musical statement. The song's flow all the way to the climax is stellar. Even more importantly, this is perhaps the only track on the album that really has a noticeable climax. This song paints a story of that rising sun in the early morning, and it's beautiful.

For a group that appears to employ a "fake it 'til you make it" mentality, Faking It runs the whole gambit of that statement. While the group does eventually give a polished presentation, much of the album feels somewhat bumbling through what could be a strong product overall. Give it a listen, enjoy what's done well, and decide for yourself what's really being faked.

Faking It streams on Spotify.