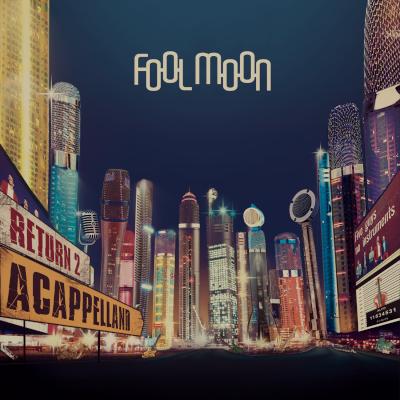 The trick of contemporary music is not in its chordal or rhythmic complexity, but in its styling. Get that wrong and it doesn't matter how accurately you perform anything else, the result is unintentional sketch comedy. And more specifically, Fool Moon's set list brings with it a real danger of unflattering comparisons. JT? Sting? Bruno Mars? Does this Hungarian quintet really have the chops to pull this off? It turns out they do indeed! And the result is nothing short of fantastic.

Effective arrangements (primarily by the gifted hands of Molnár Gábor and Németh Miklós) and skillful production (exact same team) merge naturally into a perfect seamless whole. The spotlight stays on the voices, not the studio magic, yet the sound is rich and satisfying, never lacking in fullness, and never overshadowing the precision vocals. And what's all the more satisfying — shocking, even — is that the tracks feel so much more cohesive than they have any right to be. This set list should be a disaster. Style, genre, culture, language ... oh boy. But with Fool Moon it doesn't matter. The group's sound doesn't jump all over in an attempt to be all things to all listeners. The members unify the disparate sources without breaking a sweat. It's the group's 11th album together and these singers know just who they are. And that resonates even more profoundly than the material.

All this sets the stage, but it's the leads that send it home. Every one of these guys brings something special to the table on track after track. But if I'm being honest, I've got a soft spot for one voice in particular. Bence Vavra has a soaring tenor that's to die for: pure, soulful, delicate, powerful, expressive, and perfectly matched to the stylistic demands of his tracks. The man can even speed rap. Come on now.

A nitpick: there's some humor on the terrifically well-sung I'm Yours that probabaly should have stayed limited to the live version; it ages less well than a pure delivery. But these guys definitely do have a sense of humor. The liner notes give us all the info we need and more, and the extras are hysterical.

There's so much to love on Return 2 Acappelland: it's upbeat, tight, clever, true to its sources, and catchy as hell. This one is a winner.

A clever mixture of classic and contemporary, Return 2 Acappelland is sure to bring a smile to your face. The song selection, arranging style, and production are rooted in both the tried-and-true and the cutting edge so the whole album feels comfortably recognizable yet refreshingly unique. Having performed and recorded for more than seventeen years, Fool Moon knows what to sing and how to sing it to make a cappella sound gooooooood.

Return 2 Acappelland features a particularly well-balanced track list. Out of thirteen songs, seven are catchy and upbeat, three are straight ballads, and two are atmospheric moderato. A Csitári Hegyek Alatt, my personal favorite, is the one track that transcends such categories by beginning somber and legato before launching into fiery staccato riffs. Amazing! Though Fool Moon is based in Hungary, only two tracks are sung in Hungarian. Two tracks are Russian and the other nine are distinctly English in origin. As an English listener, it is nice to be able to follow along with lyrics for the majority of the album. At the same time, the Hungarian and Russian tracks are a welcome change of scenery with an authenticity lacking from the more formulaic American pop. By pulling material from a wide range of sources, and with an emphasis on the earworms, Fool Moon compiles a full album that is easy to play on repeat.

Fool Moon has a rock solid grip on the a cappella recording process. Two group members who have been in it since the beginning, Gábor Molnár and Miklós Nóméth, take credit for all of the arranging, recording, editing, mixing, and mastering on Return 2 Acappelland. When you are that involved from start to finish, it is much easier to ensure that everything you envision comes to fruition (I'm listening to you, It's Probably Me). Borrowing from good old barbershop quartets, they arrange songs primarily with a nimble soloist, fun bass line, and tenors singing rhythmic syllables and harmonies. From the more recent trends in music, they lay down punchy, prominent percussion. In the studio, all of the parts are EQ'd, FX'd, and balanced so it sounds like (mostly) natural voices with a focus on whatever elements are keeping the melody moving. Transposing instruments to voices can look good on paper but come out cheesy, or cluttered, or jarring in performance. With their years of experience and proficiency in all stages of the process, Molnár, Nóméth, and Fool Moon make recordings that let us forget non-vocal instrumentation was ever even part of the song.

In summary, Fool Moon is brilliant and Return 2 Acapelland is a worthwhile addition to your collection. Is there room for improvement? Of course! Sometimes, as in Locked Out of Heaven and Uptown Funk, the lackluster delivery of the background parts don't match the zeal of the percussion and soloist. This is not an issue at all in the more intricate runs of Duna Vizén... (Népdal). My recommendation? If we get to go back 2 Acappelland, I would love to hear pop songs that stray a little further from their cookie-cutter structure, more folk melodies, and maybe even an original composition. But even if Fool Moon doesn't change a thing, Acappelland is the place to be.

Return 2 Acappelland boasts creativity on all fronts, from the slick design of the album cover to refreshing takes on American and international songs. Fool Moon's latest release balances a purist a cappella approach with modern vocal and studio tricks that showcase complexity, depth, and a musicality that's both professional and touching. There are a few lulls in the sense of delivery and the occasional middle-of-the-road performance, but this proves to be fleeting in the grand perspective of the project.

What's most impressive about Fool Moon is the group's versatility.

Attention is a prime example of Fool Moon's capabilities. The track undergoes multiple style switches, opening with jazz, adding a bit of Latin flair in the middle and ending with stunning electricity. Each part is beautifully mixed, drawing your ears in while keeping your attention on the collective sound.

As the album progresses, you're treated to a bevy of charismatic performances and complex arrangements. While tracks such as I'm Yours and Wedding Day are great and add much in terms of coolness and emotionally gripping music, it's the international tracks which are truly the standouts.

Duna Vizén... (Népdal) makes a statement with its quick rhythms and the passion in which Fool Moon is able to vocalize the Hungarian lyrics. Not only is the arrangement highly complex, but there's so much life and imagination being breathed into the track, contributed heavily by the drums, collective shouts, and added claps. Fool Moon displays a unified sound that's incredible and engaging from start to finish.

Derzhi is another great example of energized vocals but has the added benefit of having soul and a fantastic groove. It's the dance track that you want played over and over at parties with its well-placed harmonies and killer horn sections. The track is phenomenal with its ability to make you feel as if you've been transported to a live Fool Moon concert.

On the opposite end of the spectrum is A Csitári Hegyek Alatt, which features an alluring solo by Mónika Veres 'Nika'. While the other tracks may be the life of the party, this one grounds you with its somber tone, classical elements, and wonderful pacing, which allow the emotions to really be drawn-out. In a way, the intensity of Fool Moon's singing is heightened, making this performance feel utterly sincere and incredibly beautiful.

Return 2 Acappelland does a stellar job of being different from other vocal albums. Its faults mainly lie with energy — the mix of tracks like Locked Out of Heaven could use an overall volume boost, while others such as Can't Stop the Feeling and Uptown Funk don't hit with the force and grit that you've come to admire from the original tracks.

In spite of this, Return 2 Acappelland establishes an identity that keeps you hooked. Fool Moon has a chic and original style which translates almost effortlessly to its sound, and for that, I know you'll be impressed by this project.