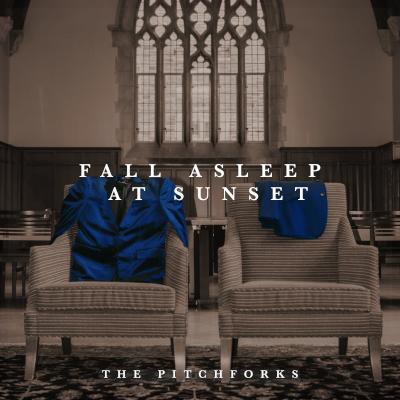 There's a permeating spiritual element on Fall Asleep at Sunset, and the spirit within the Pitchforks is lit for the occasion. You'll hear about flames and fires, rivers and floods, and what's really going on at church this week. The intensity from many of these soloists is enough to cry, "Get 'em a pulpit!"

So my concern from a musical standpoint is not a lack of conviction or talent, but that the third-most memorable arrangement on a contemporary a cappella release of ten tracks is the classic chart Shenandoah. This arrangement was turned in from an alumnus of the group back in 1982. Somehow — don't ask me how — nearly forty years later (with the original dating back to the 19th century), this arrangement manages to captivate with equal parts despair and hope and feels like it'll forever belong to the Pitchforks. Helping this fact, this recorded version is impeccably delivered. But the most effective writing here, by a wide margin, is red-hot Let It Be (though not the Beatles tune you're now humming — the song by Labrinth). The storm has arrived, and the thunder is gloriously frightening on Let It Be. The album's closer, a big time, whoop-it-up collaboration between the Pitchforks and the Virgina Sil'hooettes, is the perfect blend of conviction meets relevance meets creativity. How about we start the next release at this level?

The Pitchforks had seven other chances to create something as compelling and memorable (and it need not be loud to do so), but they didn't quite get there. Lots of block chord harmonies instead of showcasing nuances; lots of "see you in the choir room" singing. Beautiful, skilled, technically proficient, but not making any new believers in the House of the Pitchforks. There's also inconsistent production on this release that distracts from easy listening.

Fall Asleep at Sunset, the latest album from Duke University's Pitchforks, is in part a tribute to the group's former faculty advisor who passed in 2013. The devotion to those who have helped shape their lives, even indirectly, is laudable. Much like the group's earlier album, Refraction, this album has an intentional through line with its song choices and emotional narrative. For all of this, I tip my hat.

The group opted to try something "new" in the recording of this album in the effort to capture a more "authentic" sound. The singers recorded with the whole group in the same room so everyone could have the shared experience and hear the sound in a different way from the individual stacking recording that has become standard practice. While I appreciate the effort to create a shared experience within the group, it doesn't translate well to the listener. It sounds like a solid live recording, without the benefit of a live audience to allow the energy to feedback on itself. On first listen, I hadn't read the story, and I felt like I was listening to a muddy recording from the early to mid-'90s. Once I read the story, I felt like I was listening to something private and internal, and I wasn't invited to be a part of it.

This technique of recording the whole group is not a new approach; it is the original approach that has been improved over the decades to become what it is. There are still recordings done as a group, but they are then used as templates to fill in. Fall Asleep at Sunset has the problem of an inability to EQ (which leaves the whole thing sounding monochromatic), the inability to mix (which sounds muddy), and without adding an extra vp, or taking the time to shape it in post, there is virtually no high hat, and thus, no upper frequency to fill out the soundscape. It ends up sounding heavy and dull.

All of the problems with this album stem from the production approach. The performances and arrangements are quite good.  There are some tracks that manage to stand out from the pack. Hold Back The River and Sunday Candy have a little more pep, and the group's blend on Once I Was Loved is impressive for a live take. And I have to give props to the soloists throughout, especially on I See Fire, Let It Be, and the ladies of the Sil'hooettes on Sunday Candy. The interplay between the two soloists on this track is quite fun!

Bottom line, this is not an album I'd recommend for listening enjoyment. However, the story behind its inception is worth giving it a shot.

The Pitchforks lack direction and polish in their latest album. Fall Asleep at Sunset definitely has its moments, but finds itself trapped in safe musicality, inconsistent production, and unpolished performances that belie the group's otherwise high pedigree from previous albums.

Much of the album's strengths and weaknesses can be framed around the production, though it's not always the root cause. The recording and editing seem to be done on the ensemble level, rather than by individual voices as is usually the standard for modern a cappella. This means that the group's blend, tuning and balance are left incredibly vulnerable as editing and mixing become limited in what can be fixed and adjusted. This is not inherently a bad thing; many groups benefit from showcasing a more raw, unaltered sound. It does, however, leave the door open for tuning and blend issues to be far more noticeable. It also means that when the group's energy and intensity stagnate throughout the duration of a song, that stagnation is even more exposed. And while balancing and mixing on the voice-by-voice level is not necessary when recorded this way, balancing on a macro-level still needs to happen. Soloists or percussion being lost in the sea of voices, for example, is inexcusable.

Several individual songs unfortunately fall apart by how well they fit in this style as a result. I See Fire loses its steam by the time the second verse begins, and its over-syllabled background parts don't translate well to the ensemble sound. Let It Be has more consistent intensity, but tuning and blend are all over the place, especially towards the end of the song. Meet You In The Maze and Sunday Candy share almost all of the above issues and never quite feel settled or stable.

Arrangements on the album are mostly pretty safe, and their style feels dated. Without a higher level of creative direction, the covers often come across as substitutes rather than alternative versions to the original song. This is evident even in songs without heavy instrument imitation. Shenandoah is a solid cover of a ubiquitous song; but because it's so vanilla in its arrangement and execution, it lacks reason for me to listen to it over several other versions of the same tune.

The album does shine at certain points, especially towards the middle. Summer Friends serves as a fantastic interlude and is an example of an a cappella album being more than just a collection of songs; it has ebb and flow as a complete product. Its arrangement also very much fits the recording style of the album; its raw energy comes across as positively vulnerable rather than sloppy. A Cappella likewise holds to similar virtues to serve as a great intro. Hold Back The River and Once I Was Loved are not the riskiest songs, but they're both carried by a consistency and energy that are a cut above the rest. They are also both carried by phenomenal solos from Alex Brunson and David Pfeiffer, respectively.

I should close by noting that the core voices on this album are very clearly strong. So many groups struggle on core vocal model alone, so the Pitchforks all singing with such a warm, resonant sound is a major boon that should not be taken for granted. It's part of the reason I feel the need to be so critical about the polish and execution of this album as a whole — these voices deserve to be used to greater efficacy, and it's even more noticeable when they're not.

This album streams on Spotify and is available to purchase from Google Play, Tidal, and the group's website.