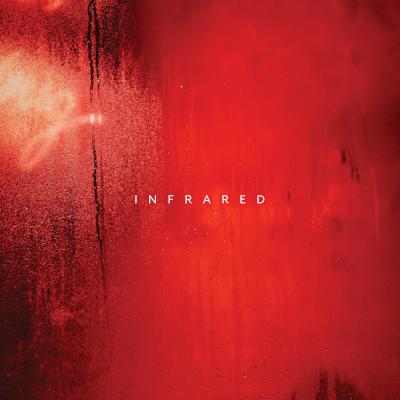 Infrared hums along a mostly straight and serviceable road for twelve tracks: I didn't find any scenic outlooks on this ride, but I did hit a few potholes.

The Overtones give us an upbeat fusion opener with Bad / Bad Reputation, which sounds like a lot of collegiate first tracks: mix a few popular artists, process the backgrounds to suit, sing loudly ... easy listening time.

You really hear the ensemble on tracks two and three, where lighter production and more difficult parts expose the capabilities of the musicians. I love the zippy sixteenth notes on Castle on the Hill, but the timid choir in the back doesn't sound very passionate about its job. That's the story too often on Infrared: the background singers are wallflowers. In the sweeping ballad Say Love, we hear background singers who are behaving like a polite choir instead of wailing, bombastic voices selling the ballad and making a frame for the lead who is committed. It's a mismatch between front and back on nearly every track. A sound engineer can always turn you down if you get too big, but he/she most certainly cannot create authentic conviction and urgency if it was never present in the first place. We need a lot more conviction and urgency on Infrared.

I am fully behind the next track, Molly. We get a refreshing rap with complex rhythms, and joyful, shining backs. There's also a really gorgeous non-traditionally structured duet pulling the music toward the center. May this framework be the start of the next album for the Overtones, because it's good.

It's unfortunate that the next song, Losing Sleep, is considerably weaker; it doesn't take away from the joy of Molly, but it does make for a marked uneven listening experience. A few other tracks fare the same, with the biggest disaprity occuring in What About Us. In this P!nk song, we can hardly hear the soloist, who is fighting to sing out of his range and perhaps comfort level, too. There are some unique chord progressions in the first verse to get excited about and clean beats throughout — again, there's just this mismatch where we can't get the full group sounding cohesive. More uneven performances drag down I'm Gonna Getcha Good!, which has a lot of potential to be an adorable toe-tapper but falls short.

Lastly, the Overtones end on Haze, which is probably more suitable as a mid-album track since it dramatically shifts the feel right at the conclusion of Infrared. It's a personal choice; in the digital era we can always reprogram the order of tracks ourselves, but as a final thought to an album it's not the strongest.

JMU is a campus with a long history of producing great a cappella. Here's hoping every member of the Overtones sings with purposeful intention for the next release.

When it comes to covering the spread, Infrared by the JMU Overtones successfully accomplishes this by putting forth an earnest effort through song choice, showcasing multiple talented soloists, and even offering a few unexpected tracks. Unfortunately, the album's singular parts prove to be better than the project as a whole.

For starters, I believe that Infrared would have delivered an equal, if not better, artistic effect had it been an EP or slightly smaller album. The project has some serious gems that are captivating and musically sound, but often get lost behind less exceptional tracks.

In spite of this, when you break down the album to its singular elements, it has some real standout qualities.

One being great soloists.

It's Gotta Be You features one of the most mature vocal deliveries I've ever stumbled across on a collegiate-level track. The lead's modern country crooning absolutely steals the show with his heavy emotional conviction and impressive riffing. In an equally impressive fashion comes the solo for I'm Gonna Getcha Good!. The song exudes a positive and exciting energy primarily dealt by the lead that's both playful, yet laden with incredible force. And while the lead can flat out sing, the Overtones do an extraordinary job of matching her intensity throughout the song.

Another key element of Infrared is its ability to deliver the unique. Molly stands out in so many ways. The song's arrangement is pivotal, helping the rap to feel authentic while simultaneously delivering multiple BIG crescendos with force. This is one track that other groups should take note of, as it wonderfully demonstrates the true soul of a song. The other gem is Guilty Pleasures Medley 5. Few groups can proclaim that they have a signature offering for their albums, yet the Overtones do. This go-around, the group offers up an assortment of mostly early 2000 songs that are nostalgic and fun, reaching across multiple genres with amazing soloists who nail their songs without hesitation.

And then comes songs that just embody all of the album's best aspects.

Say Love has a raw, emotionally intense nature to its vocal delivery that cuts through your very being. The lead is gentle, yet confident, while the backing singing is flawless in helping her sell every aspect of the song. Jason's Song is jazzy, infectious and sophisticated, and has a way of surprising you at every turn. All I can say is prepare for one heck of a key change. And Haze has an earthy, nuanced quality to it that feels honest to its very core. You can actually feel the emotional weight from every singer who helps bring the song to life.

Once you dig deep into Infrared, you are capable of seeing that it truly has some phenomenal parts to it. It can suffer from song overload at times, causing creative disparity between the good and the really good. Its moments of surprise, and massive and sensational vocals, however, are well worth the ride.

I was excited when I was given the chance to review Infrared, the latest album from James Madison's Overtones. Not just because I enjoyed the group's previous release, Synesthesia, so much when I reviewed it back in 2015, but I also wanted to see if the members took my challenge at the end of that review to heart. I asked the group to take its creative chops and let loose on an arrangement, either creating something completely original or giving a new interpretation to a cover. After listening to Infrared, it doesn't sound like the group was comfortable doing this just yet. However, that's okay — because what these singers did release was another firecracker of an album that sure puts a smile on my face.

One of the creative liberties that the group did take is on What About Us, where the arrangement is slowed down in the beginning just a touch and slowly builds up through the rest of the track. The slower tempo combined with the beautiful solo from Mohammad Khan gives the track a more somber feel than P!nk's uptempo anthem. I also really like that the arrangement calls for the background vocal parts to be sung on words for a large majority of the track. Whether it is echoing the solo line or completing the verse, I really appreciate groups that do go that extra mile and fit words into the background rather than just the standard "doo"s and "ahh"s, and the Overtones do this beautifully here.

Another strong track is the first song, Bad / Bad Reputation, which is a mashup of Michael Jackson's Bad and Kelly Clarkson's Bad Reputation. Well, "mashup" may be the wrong word — the group briefly uses Bad to first introduce the track, and then switches to the Clarkson cover without ever revisiting Jackson. While I wish that the group incorporated the songs together a little more, this track absolutely rocks from start to finish. Rachel Cowgill's solo has power and attitude from the start that brings the house down, and the background vocals follow her grit and attitude step for step. Where this track really shines, though, is the percussion, where Jeff Gimpel's explosive snare and high hat combinations make the choruses really pop. All of these elements make it one of the better opening tracks for any album that I've heard in quite a while.

However, I am confused by Guilty Pleasures Medley 5. This medley tradition has now been on five Overtones records, and the group and its fans must really like them if they keep finding their way onto the track lists. I just wish that the medleys had some sort of flow to them that connected the songs together. This one includes tracks like Avril Lavigne's Sk8er Boi, Justin Timberlake's Rock Your Body, and Christina Aguilera's Ain't No Other Man — all great songs, but I am not seeing the connection between all seven songs in this format. To me, the songs are just seven songs put together with no rhyme or reason, and that thought is furthered when the group moves on to the next song — there is no revisiting the song later in the almost six-minute track. This brings me to my additional challenge — rather than just picking a bunch of songs that the group likes, taking on a smaller number of songs and blending them together into a more cohesive story or narrative. The concept of guilty pleasures is a good one, but I think that the Overtones should take it to the next level.

The Overtones, however, have proved that they are back and are in contention for my favorite album of the year. Well done, Overtones — keep the records comin'.