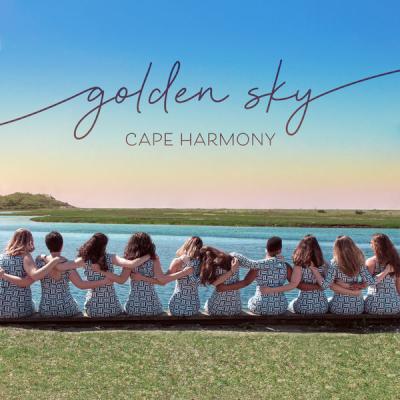 Golden Sky is a live recording, but listeners might not realize that it's a recording from a concert until the first track is done and the applause kicks in. It definitely sounds like a "live recording" (recording all voices at the same time), but there's almost no audience noise throughout the songs, so the applause is a bit jarring if you're not expecting it. The concert has also been edited to include only the songs themselves — so there's no between-song banter or chit-chat from the group.

Overall, this performance is good for a live recording; the group's pitch and tone sound far more consistent than a typical concert. That goes a long way toward making Golden Sky a pleasant listen, and the first four songs are clearly the group's best and are a smart way to start the concert and the album. Album-closing Many the Miles is also a highlight: soloist Kayla Liquori sounds great, and the group has just the right delicate touch with the backing voices in the arrangement.

But there are some songs here that suffer from the live recording. Tempo is an issue: Big Yellow Taxi is notably slow (Rock with You also feels a little slow), and this could've been avoided in a studio recording. While the group's pitch is quite strong, there are some songs that falter; the beginning of Holding Out for a Hero is noticeably pitchy, and Praying also has some pitch issues. Wannabe is not a great song choice — the group might have a blast singing this in concert, but it doesn't translate well to a recording.

While Golden Sky is good for a concert recording, our review rubric at RARB specifies that we compare albums to the body of recorded a cappella as a whole. The sound of an album that's "recorded live" just doesn't hold up to the strength of today's studio recordings. Cape Harmony obviously has some great talent; soloists are generally on point, and the arrangements and delivery of these songs is quite good. There's a lot on Golden Sky for Cape Harmony to be proud of, and I hope they'll take their talents into a proper studio for a more professional-sounding recording.

I have always been wary of including live tracks on albums. In the studio, you have the benefit of recording multiple takes of a voice part and using one of dozens and dozens of tools and tricks to beef up each track, most of which are not available for live tracks. Live tracks are pretty much one-shot deals — set up some microphones, press record, and cross your fingers that you get a balanced recording. Cape Harmony, therefore, took a huge risk in releasing Golden Sky, which is an exclusively live album — no studio recordings at all from track one to track fourteen. While there are some solid moments throughout this recording, I am not sure if the reward met the level of risk.

Before I start picking things apart, a few positives. I do really like the track list from top to bottom. As a summer group that performs multiple live shows a week in front of an age-diverse audience on Cape Cod, it is important for Cape Harmony to select a wide range of songs so that everyone in attendance will recognize some of the tracks and be able to connect. Cape Harmony strikes that balance very well, ranging from Zedd and Maren Morris's The Middle to the Spice Girls' Wannabe to Elton John's Don't Go Breaking My Heart — I can pretty much guarantee that every person in that audience was grooving to at least one song throughout that show. One of my favorite tracks is When I'm Sixty-Four — Elsa Carreras delivers a beautiful solo, and the harmonies and background vocals throughout the track are well-placed and support the solo line well, too. You'll Never Walk Alone is a another standout, with Julia McBride showcasing her fantastic range in an emotional solo that gives me goosebumps with every listen.

Where the group runs into trouble with the balance is on more of the upbeat/modern tracks. Let's use The Middle as an example. In any recording, and particularly on tracks where you have a more "electronic" vibe, the bass and percussion are critical to helping drive the song forward. However, the percussion and bass are hard to pin down with the strength of the upper voice parts. It sounds like there is only one bass vocalist in the group, and she is going to have a hard time cutting through in a live recording regardless of how close the mic is simply because of the math. This is where a studio can really help, as the bass and percussion can be beefed up with multiple recordings stacked on top of each other to give more presence in the recording. In the beginning of the final chorus, the convergence of all of the harmonies and solo make that moment somewhat muddled and it is hard for me to know exactly what to follow in that moment. Some extra work in a studio would have cleaned that up in a way where each part would have been able to shine. While this is one example, there are moments in other uptempo tracks that could have benefitted from this as well, particularly Holding Out for a Hero and Wannabe, where the latter could have used some additional bass layers.

While I do hope that Cape Harmony's next album includes studio work, I definitely want to see Cape Harmony live very soon. One thing that is evident is that all ten women are having fun on stage, and that energy comes through on every single track. Ladies, the next time I am on the Cape, I will let you know so that you can save me a seat.

As I started listening to Golden Sky, the first thing I noticed was the recording quality of this album. This album sounds live, which is odd. Cape Harmony is a professional summer touring group. Members audition from all over the country and spend their respective school years as part of some of the most popular groups in collegiate a cappella. It is almost mind-blowing to hear what seems to be a very solid arrangement from the first track hampered by the recording environment. The vocal percussion and bass aren't balanced relative to the rest of the group as they should be due to those parts having significantly less natural projection. Soloists are almost overpowered by the backgrounds. For a group that at a glance should be stellar, why didn't these musicians get a professional studio to record this album with all of the mixing and mastering this group deserves?

After using the entire first song to adjust to the sound I was expecting to have come through the speakers, I heard quite possibly the worst thing I could have from this album: audience applause. This album isn't just live in the studio. This is a live recording of a concert.

It's hard to claim that every problem that this album has is due to the recording method and setup, but it is safe to say that there are many issues that would be avoided by a better recording method. The balance is very top-heavy. I'm constantly losing the inner voice parts, especially in the lower alto range. The bass has small tuning errors. The vocal percussion is occasionally lost, especially in the more polyphonic parts and areas where the sound is based more on cymbals than bass kicks and snare hits. Any snapping or clapping by the group or audience is present, but at a very diminished effect, and almost always at least slightly off-tempo.

However, once we get past all of the issues, there are some great things going on in Golden Sky. There isn't a single bad soloist on this entire album. There are also some brilliant arranging moments across the recording. From the jazzy reimagination of Big Yellow Taxi to the rich chords throughout The Middle and the story arc of Praying, there are so many great moments. If there's a silver lining to the recording method, it's that you can hear the pure musicianship present across the group. There is a small pause after some of the biggest moments to allow for the chords to ring. Some of the best chords have that buzzing associated with perfectly-tuned intervals. It's not a consistent effect, but it's always a great moment when it's there.

This would be a great performance to see on a summer evening. I imagine that many of the flaws I'm hearing are not as present to a live audience. However, it's very hard to be fully accepting of this album when heard through headphones. The overall product is just too unpolished. I am conflicted in scoring this album, because I am asked to judge what exists instead of what could be. Therefore, I feel many of the scores for this album would greatly increase in a studio. An album from this group that is fully mixed and mastered could be amazing. However, until then, perhaps this will have to do. Listen if you'd like, maybe find a YouTube video if you want the visual element, or maybe find the group's closest performance and travel to see them. However, for now, I think I'll wait until Cape Harmony heads to a studio, and we'll see what the full recorded potential truly is.