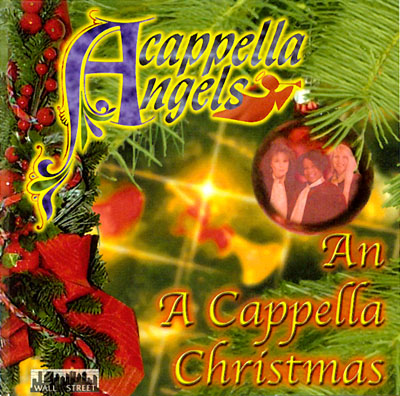 The name "A Cappella Angels" conjures images of gentle, delicate soprano voices sweetly singing in the distance. These angels may have fallen a bit further than that. Oh, they have some soprano notes in there, but these three pop divas are mostly about deep inversions and high power delivery. An A Cappella Christmas is right on target for mass appeal: the Christmas classics sung by three Broadway belters. It doesn't exactly push the boundaries of the a cappella art form, but so what? It's pleasant enough for grandma and spirited enough for Junior. For a Christmas CD, what more do you need?

Be warned though: the tone colors can reach the edge of strident here. Warm and rounded make infrequent appearances on An A Cappella Christmas. When the music calls for power, these women can deliver in spades. But when the music calls for a bit more (dare I say) angelic approach, the result is sometimes a little heavy-handed for my taste. This is not to say that the Angels don't have dynamic range; they absolutely do. It's simply that they can get so much power on the forte side that their pianissimo is akin to the average mezzo forte. This CD could have been called "Christmas Up a Notch".

Then there's that minor misnomer "a cappella". Perhaps "vocal" might have been more accurate. Light accompaniment tastefully fills out the sound on nearly every track. Usually this takes the form of distant drums or hand percussion. However, a few tracks will have purists breaking out in hives. What Child Is This? employs prominent guitar, light percussion and chimes. Silent Night has a beautiful harp solo. Chanuka, Oh Chanuka has several guitars. The Coventry Carol, guitar again. It's all quality stuff, just not a cappella.

The biggest selling point for this CD is the strength of these three voices. The A Cappella Angels are each clearly top-notch commercial singers in their own right. An A Cappella Christmas is the polished and powerful result of their union. It's a solid CD, but not a knockout.

There really is nothing wrong with this album. The songs are recorded so that you can hear each singer clearly. The tuning is impeccable. The blend is just fine, and they add just the right amount of energy to each selection. I even didn't mind the continuous use of hand-held percussion, and thought that the use of guitar and harp was a nice touch.

The problem lies in the fact that I've heard these arrangements before. In fact, I've sung many of them. They're the kind of arrangements that you make up sitting around the Christmas tree with a bunch of good friends while drinking hot cider and eating sugar cookies. I wish they had looked into some more interesting arrangements.

All in all, this is a nice album to play in the background during your holiday parties. If this was the ultimate goal, then it has been achieved. If this was supposed to be a jaw dropping example of a cappella, then it missed it's mark. As for me, I'll stick to my cider and cookies!

You'll notice the words "A Cappella" appear twice on the cover of this CD. This might actually lead you to believe that the music contained therein is in fact a cappella. A reasonable expectation given the title.

Now I know there are those who feel some percussive accompaniment may be permissible — especially in period music — within the larger musical form that is a cappella. I don't disagree. But let me be clear: there is not one single track on this album that is completely a cappella and many, including the final six, have more than one instrument. Next.

Included at the end of the track list in the liner notes is a line which states "All arrangements by the A Cappella Angels". FYI, the A Cappella Angels are three very talented women who, on this album, render very competent but relatively traditional versions of your favorite Christmas carols. Many of the harmonic lines they employ will sound strikingly familiar to you if you've spent any time caroling with your local chorus or singing group. True, the arrangements you sing were not conceived for three female voices but so many of the harmonic elements to the songs on this album were adapted from conventional arrangements that I take serious issue with the group's claim to have "arranged" all of the music.

Those of you who don't care about my philosophical rantings are asking "But can they sing?". The answer is yes. Quite well. Their pitch is spot-on, their blend is satisfactory, and their diction is excellent. They bring a pop/gospel style to traditional melodies and arrangements which, to their credit, is marginally successful in separating these songs from the old-school, choral settings in which they are generally heard during the holidays.

But in the end, their first-rate singing is not enough to create a musically satisfying album. I'm sorry, but any three female voices will have a tough time creating a rich, textured sound without overdubbing. The few overdubs on this album do show great promise when first introduced in a song, but the resulting multi-layered musical idea is then repeated ad infinitum until the novelty is gone. Sophisticated harmonies might have made up for the limited number of voices, but as already mentioned, the harmonies stay pretty much by the book. I almost wish these ladies had gone all the way and recorded a fully accompanied album, which might have been a more compelling showcase for their skilled vocals.

The A Cappella Angels, a female trio out of Los Angeles, have crafted a respectable but plain Christmas album that could have been saved by more interesting arrangements, stronger production, and a greater attention to singing basics.

Although the credit "all arrangements by the A Cappella Angels" appears in the booklet, most tracks sound as if the melody and song structure were lifted out of a standard hymnal and then basic harmonies added. Simple thirds dominate, and haunting standards like O Come, O Come Emanuel come off as thin and uninspired. It was like hearing Happy Birthday with those cheeseball harmonies on the last line that Grandpa always insists on singing.

I really wanted more production. What Child Is This?, the best track, just floats with that touch of reverb, adding body to the three treble voices and capturing the mystery and wonder that the song describes. The rest of the album is very punchy, and the few appearances of harp and percussion are mixed far below the voices, too low to make an impression.

But the most annoying thing is the lack of choral singing basics that infects every song. Singing the word "angels" as "an-gehls" instead of "an-juhls" is the hallmark of the high school choir taught by the band director who'd rather not be doing it. And these ladies clip their words and phrases like nervous middle schoolers, jamming in hurried breaths between phrases: "O come let us adore HIM". Don't get me wrong, they can sing, but never do the three voices become one. Until they do, these A Cappella Angels will remain firmly earthbound.

I'm not one of those purists who turns up my nose at artificial percussion, but when a third of an album is accompanied on harp and guitar, it borders on misleading to title it a cappella. This CD isn't really An A Cappella Christmas, but it is a well-executed, enjoyable set of classic songs.

The Angels star three strong, mature female voices, and the two lower voices stand out for their no-nonsense alto character (singers Molly Pasutti, Dibrilynne Rice, and Robin Tapp are not identified by voice part). Many arrangements assign the melody to a lower part, which adds depth and interest to the songs as well as highlighting the stronger voices in the group. A bonus of this choice is that it makes the album easy to sing along with. Anyone who has had it up to here with soprano-centrism will love comfortably singing melodies along with the alto Angels.

Musically, the Angels know what they're doing. The tuning is solid throughout. Each arrangement is respectful of traditional versions, but throws in touches of creative spice. I claim no expertise on the nuances of harp technique, so the most insightful comment I can make about the instrumental performances is that they sound pretty.

Now for the negatives. Many groups insist on arranging songs with unnecessary repeats and extra choruses that don't help make the point. I wonder if this is why the Angels seem to err on the side of caution, abruptly lopping the traditional endings off some songs. This is risky with such familiar material. I won't be the only listener looking forward to the "Sing, choirs of angels" descant on O Come All Ye Faithful or my favorite myrrh verse on We Three Kings, both of which fail to materialize. This problem gets completely out of hand on Go Where I Send Thee. Why start a counting song and only count to five? That's like covering Twelve Days of Christmas and giving up after six geese a-laying.

Also, I'm sure the Angels' motives were pure, but the token inclusion of Chanuka, Oh Chanuka is musically jarring and wholly unconvincing. The angels from the realms of glory were not singing about dreidels. These Angels shouldn't, either.

In sum, the Angels may not be a cappella, but they are the musical equivalent of a cool glass of eggnog: one sip, and you'll be visited by the ghosts of Christmases past. If you're in search of the perfect CD for your next tree-trimming party, An A Cappella Christmas is a safe bet.

To purchase An A Cappella Christmas, send email to angels@wallstreetmusic.com or phone (248) 353-7733.