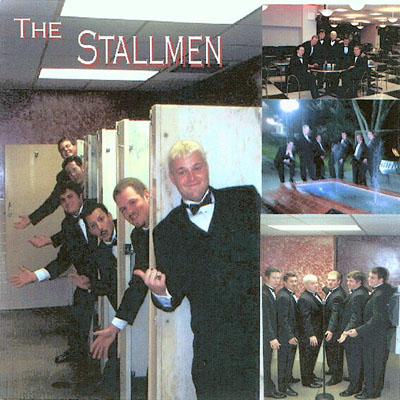 Used to be, when you got an album from the Deep South, it sounded like it. Darkness on the Delta, Swanee River and a country song were mandatory staples. But this latest album from the Troy State Stallmen bears little trace of its Alabama origins, Swanee River notwithstanding. I think that's most of its problem.

Southern charm is a powerful thing. I figure these guys have it, since you can hear their accents in the obligatory studio out-take bonus track at the end. But their music has a generic blandness that is not overcome by charisma or musicality. And I am disappointed, because it has been a long time since I heard a properly engaging album of lush southern personality and I think we're about due for a good one.

You can tell the Troy State troubadours have music-student origins. There are some lovely chords hidden here and there, even if there isn't quite the polish we have come to expect from the best groups. On Your Own is quite a pleasant jazzy number with an excellent solo, while All That I Need has some lovely moments, even if the tenor should have stuck to his true range and skipped the falsetto. Peculiar Beauty was cute and boppy in a doo-wop way, but also typified the could-have-been-anywhere tone of the entire recording.

A few trips through this album leave me with little conclusive to say about the Stallmen. I'd go to their show, and also I wouldn't bother with this album unless I knew someone in the band. But it's a respectable effort, and I think the group shows promise. Especially if they can make the most out of their roots.

The Stallmen are a sextet from Troy State University in Alabama. Their self-titled debut is definitely different from almost any album I've had to review this year. The group had no funding to record an album, so they went over to the home of a faculty member and recorded a ten-track album using only a DAT recorder and a stereo microphone. Now, as an a cappella studio owner myself, I would generally discourage this method of recording an album, but it actually turned out pretty well. I've reviewed several albums this year that were recorded in a similar method, by much older singers, who could not touch the quality of this recording.

The "gentleman of the stalls" perform original music almost exclusively. Yes, I did say ORIGINAL. I have only the highest praise for any college group that performs original material, especially those groups performing as many originals as the Stallmen. The originals are not terribly catchy and you probably won't find yourself humming them to yourself, but that's okay. This group is doing something different, something original, and definitely something more interesting to me than most of the other college groups performing cover after cover.

With that said, let's talk about the production quality for a minute. Granted, these guys stood in front of a stereo microphone and just sang their songs, but there's more going on here than that. Generally, when you get a group of college men in front of a microphone (or an audience) they have a tendency to rush their tempo. These guys really took their time and set appropriate tempos. Since there are no overdubs here, if someone sings a note that's slightly off, you either have to re-do the take or leave it in. There are very few off-notes in this recording. Granted, it's not barbershop-perfect, but I don't think it needs to be. The reverb is a little too much sometimes, the vocal percussion could use some sprucing up, and I heard some distortion in several places but, once again, I'll let it slide because they're doing something interesting on their recording.

I can't really recommend THIS album by The Stallmen, but once they raise some money and go to a real studio, look out! I would definitely love to hear their next recording.

So often I listen to collegiate CDs, featuring all or mostly covers, and lament the group's slavish efforts to duplicate the instrumental version of a given song. Where's the originality? Where's the creativity? Why, oh why, don't college groups consider doing some original material as well?

Enter The Stallmen of Troy State University (where is Troy State? Good question. Nothing I received, including their cover letter, had any address info.).

So you're thinking, "Oh boy, he really likes this group, get ready for gushing adjectives.".

See, the reason most college groups probably don't consider doing original material is the difficulty in finding good original material. Why do your buddy's cheesy ballad that he wrote for an ex-girlfriend when you can do the latest top 40 hit?! And there's something to that theory. If you do original material, it's not just the arrangement that needs to be good. It's the song itself, too. Such is the problem that plagues this CD. They're to be commended for doing their own music, but their own music is rather undistinguished (with the possible exception of the peppy In A Little While and the bluesy On Your Own).

The cover letter sent by the group's faculty advisor John Jinright explains that this CD was recorded at his house, somewhat hurriedly, in an effort to sell copies at the group's Spring concert and raise funds. It shows — especially with tracks like the opening Star Spangled Banner featuring a number of very noticeable and distracting splices, most likely because it proved too hard to nail the jazzy arrangement (by Jinright) in one take.

On the other hand, understanding the circumstances, the album is laudable. The guys sing well enough and their blend is rather well-developed for a small collegiate group. Their arrangements, of up-tempo songs in particular, show a Blenders/Rockapella influence, if not the sophistication or the polish (but that's a pretty tough standard). Unfortunately, most of the guys seems to aspire to have Scott Leonard's high range which results in a good deal of strained falsetto and grows tiresome on the ears. When they're in their rich mid-ranges, though, the solos are far more enjoyable.

All in all, unless you go to Troy State, know these guys, or have the money to support their efforts for art's sake, you don't really need this album. If this album makes the money these guys need to succeed in their quest to make a studio album, and if it features some slightly better developed tunes, that's the album you want to buy. Here's hoping they can make it happen.

P.S. Troy State is in Troy, Alabama (I checked their website).

The Stallmen, a men's sextet out of Alabama's Troy State University, have crafted a rough first effort, but one that shows a lot of promise for this group and its members.

The potential is evident in many areas: good voices, tight arrangements, a nice blend that comes off just right on a live-to-DAT recording. But the most striking and enjoyable aspect of this album is the fact that they perform almost all original songs.

And good songs, at that. Tommy Newman, particularly, displays some impressive writing chops on Closely Into Her Eyes, and In A Little While — watch out Sean Altman. And the rest of the group keep up: four of the six members boast writing or co-writing credit on at least one song.

Of course, doing originals may be an impressive distinction in the college a cappella world, but in the real music world it is the norm. If the Stallmen want to throw their hat in the ring against some of the pro groups out there, they've got a ton of work ahead of them. They're particularly shaky on the opening track, and their singing lacks the confident "oomph" that they'll need to sell their songs and their sound to an audience unfamiliar with both.

The Stallmen are a diamond in the rough. They have a lot of work ahead of them but I'll be the first to check them out in a few years and see what's emerged.

This self-titled debut album of the Stallmen is a worthy effort. It was ghetto produced: a two-track recording with a DAT machine and one mic, edited and burned at a home.

The main issue with this album is tuning, in both the backgrounds and soloists.

The guys seemed most comfortable with the Star Spangled Banner and Swanee River, both of which had the best blend and pitch on the album. The other songs seemed to me like they needed more practice. The soloists were often off pitch and there were moments in the background where the person singing that note could not have possibly believed that it belonged in the chord.

What really saves this CD is the fact that is it a collegiate album with SEVEN original songs. Except for some painful tuning in the bridges of Peculiar Beauty, I really liked it, though the verses reminded me of Video Killed the Radio Star. There was also a good trumpet duet in Tequila Rain, but the song that stuck most in my head was In a Little While.

My advice to the Stallmen: Sell this and make money so you can get into the studio. Get some high quality artwork done, redo the originals on this album, record some new ones, and put out the first collegiate album made up entirely of original music. (Unless there is already one out there?) Oh, and try some vocal percussion.

My advice to potential buyers: This isn't the greatest album in the world, but if you've got some money, buy it just to get these guys closer to a studio.