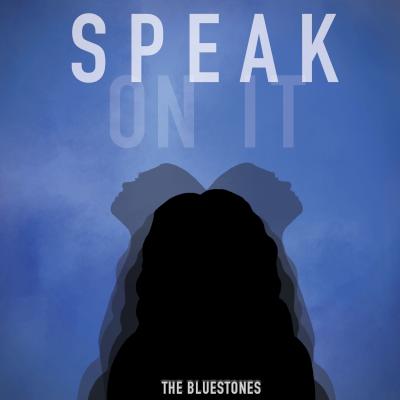 The JMU BluesTones continue the trend of putting out fantastic pop music covers with a lot of vim and verve as is the case with the group's latest recording, Speak On It. The group's no tears left to cry is a prime example. While my favorite should always be Nomadic's bop, this version hits all the right spots as well and is a great kick-off to a pretty strong album.

Overall the production is really top-notch. Gammon is once again at his best when producing the virtuostic voices of the BluesTones. I'm assuming the group feels heard and trusted when he's behind the console because these musicians sing with an ease that belies the intrinsic difficulties behind recording a cappella music. Take Heart Of Gold for example, Mario Jose's plaintive ode to love and thanks. Through the brilliant leadership of Emily Jenkins on lead it unfolds from this angelic whisper to an expansive and all-encomposing cloud of sound. The entire album sounds warm without being stifling and bright without being buzzy. Speak On It simply sounds like the perfect end result of a producer and musicians gelling.

The soloists are dynamic and daring as usual. But special accolades go to the trio of musicians at the top of the album. Every group that can should strive to have an Emily, an Emma, and a Bianca in its midst. Emily Gulli's take on the Ariana opener is light and sassy where it needs to be and drives it all home when the occasion arises. Emma Magner puts enough Eilish on idontwannabeyouanymore that Billie had to step aside and say "Damn." And Bianca Galvez's gravitas on Curve is at times a muffled growl of pure pleasure. Like the only thing that comes to mind trying to describe her rendition is that she's the dirt you toss on the coffin at the end of the funeral because she killed it! There are other tracks that I like on the album, but I'm playing these on rotation. And there are LIVE VIDEOS OF THESE THREE SONGS ONLY AND I'M HERE FOR THEM 24/7!

There are a few inconsistencies with the album that make it difficult to say that this release resides in the upper echelon of a cappella. Some of the middle songs lack a bit of energy and cohesiveness that are in abundance at the beginning.

I don't know why any group covers Poison anymore, but especially a woman-centered group. At least do something with it to turn it on its ear in some sort of 21st century deconstruction. Female groups have covered it in the past better than this version (which is fine, just not noteworthy). I don't know, it's not something I care to listen to anymore without some compelling reason to do so which isn't present here. Sahana Ven is baller on the solo though. Woop.

The only other even minor issue with one of the tracks is Hell on Heels. It's a solid song, actually probably too solid as it tends to plod along. Upping the BPMs by at least five clicks if not even 10 instead of sticking with the original's languid trudge would have put a bit of spark into this well sung but completely boring song. I love female country trios (Dolly, EmmyLou and Linda being the ultimate, The Chicks my favorite, and the Mandrells my childhood tv sweethearts), but something about this track doesn't work for me.

Speak On It is a worthy album to have in one's collection. Several of the tracks are absolutely mind-blowing and will stand the test of time.

Speak On It satisfies, featuring strong female anthems covered beautifully. This release is a pleasure to hear.

I do long for a bit harder hitting background vocals from the BluesTones; greater intensity would help deliver these stories with more conviction while supporting the leads who are definitely going for it. If you lean into the start, no tears left to cry, you'll hear a committed solo from Emily Gulli, but backgrounds that are a bit thin, a bit gentle. This disparity pops up in a lot of the songs, quite noticeably on the mid-album track set of Poison, Love Me Right, and Mirror. Thoughtfully thickening those trio of arrangements would give the singers more to dig into, too.

On the flip side, great lead vocals are not in short supply on Speak On It. Emma Magner sounds absolutely gutted in Billie Eilish's heavy self-reflection piece, idontwannabeyouanymore. Magner sounds like she legitimately identifies with this work, creating the kind of experience you can't simply create in the studio. It's powerful. Turning in a decidedly opposite delivery, Emily Jenkins offers a short and simple but wonderfully effective and captivatingly emotional performance in Heart Of Gold. And then Magner returns to blow the roof off the joint on the group's flashy closer, Only Wanna Give It To You.

I also enjoy the rotation at the vocal percussion microphone. It says a lot about an a cappella group when nearly any member can step up and do a great job keeping the rhythm popping and locked down; that takes a lot of confidence and group rehearsal work. Curve is particularly fun, with tight harmonies that weave around the punchy drum cadences, and the bounce on Prom is addicting. Can't get enough of the raw vocal percussion on Trampoline, either.

As usual, James Gammon does a marvelous job crafting production that befits the voices at hand. He is so sensitively skilled at his work.

Listen to and appreciate the graceful music of Speak On It — it's quite easy to do.

The BluesTones have delivered a thoroughly enjoyable album with Speak On It; these singers embrace their niche of contemporary pop songs, and the album as a whole flows and is lovely to listen to.

Song after song is just beautifully-delivered, from the foundations of the arrangement all the way up to the soloist. The opening notes of no tears left to cry set the tone for the whole album; Emily Gulli's lead comes in perfectly, and the song shifts between verses and choruses seamlessly with a tone and momentum that keeps playing in my head long after the song is done. Holli Matze Kitching's arrangement of Hell on Heels is just the right balance of sassy and sultry, and the BluesTones sell it perfectly. Mirror also moves beautifully; it's not always easy to make a ballad move, but the dynamics and phrasing keep the song from getting stagnant, and the performance is truly lovely. More than that, somehow these singers have been able to capture their joy of singing: it sounds as though they truly enjoy singing these songs and are fully engaged throughout, which goes a long way towards keeping listeners engaged and enjoying the music right alongside them.

No single element of the BluesTones' sound sticks out from the rest: the soloists all sell their respective songs without overpowering them; the percussion anchors and holds the beat; and the backing voices all carry the phrasing and the dynamics in arrangements that both complement the voices and fit the original songs. As a listener, I can't find the weak link; this is a truly cohesive group effort from these singers. The BluesTones have always been good; on Speak On It, these musicians have aligned their stars to be truly excellent.

Speak On It streams on Spotify.