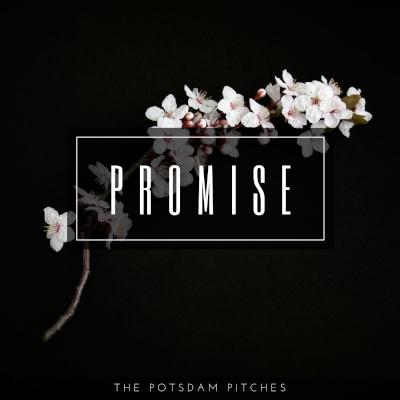 With a booming ensemble in the back and a compelling reason to record up front, the Potsdam Pitches have cemented musical history for themselves and given fans jam-worthy memorabilia.

This three-track set gave the SUNY Potsdam Pitches a commanding first place win at the group's 2020 ICCA quarterfinal. The group also picked up the following special awards: best soloist (Alyssa Sposato for Sandcastles — likely a shoe-in after singing the very first phrase and she only gets more jaw-dropping as the song unfolds); best arrangement (Kayla Mauk and Andrew Richardson for God is a Woman); and though we can only imagine their moves, Best Choreography for this set, too. Though recording an EP of an ICCA set is becoming more commonplace, and isn't new for the Pitches either, a 3-punch this decorated is certainly a worthwhile endeavor to commemorate these musician's success and remember an extraordinary year. (We'll never know the results of the pandemic-cancelled semifinal.)

Each piece has its moments that place the Potsdam Pitches a few steps ahead of their fellow songbirds. There's really smart arranging constructing Lost In Japan; the resonant closed-mouth hum that pops in is an effective texture while still supporting the lead. Nicely crafted built-in intensity increases in the arrangement as the song progresses with big-mouthed open-vowel explosions and a downright triumphant key change. Was there a battle? Seems the Pitches have raised their victory flag just one song into Promise.

Lead Alyssa Sposato gloriously dominates Sandcastles. Arranger Andrew Richardson has returned from track one, along with co-arranger Leandra Wahlen, to provide the sonic playground the rest of the Pitches play on while Sposato spins us around her carousel. This is great music with a huge wow factor.

Richardson and Kayla Mauk's arranging showstopper God is a Woman closes out Promise. Some of the electronica flair of the original is recaptured here naturally, and quite elegantly, through showy swoops and swells in the vocals that don't lose any power in the message or the singing. Spoken-word assertions are also confidently peppered into the middle to bridge us to the thrilling ending. Also deserving of praise, skilled lead Leandra Wahlen's pipes putting quite an exclamation mark on this piece.

Promise is an enjoyable, confident set covering three pop megastars with absolutely delightful results. Though I'm sure this era of the Pitches wanted another chance to advance in the ICCA tournament, this satisfying release captures their talent in the best of light.

While this is the first release that the Potsdam Pitches have submitted to RARB, this is by no means the first work that the group has produced. In fact, for the last five or so years, the group has released its ICCA competition setlists, and Promise follows in that tradition. After listening to this 2020 set, I really want to hear a whole album from Pitches.

At first glance, the group certainly didn't take the easy route by choosing Shawn Mendes, Beyoncé, and Ariana Grande songs to cover. But, all three songs really hit the mark well on their own. With each track arranged or co-arranged by Andrew Richardson, clear attention was paid to the musicality of each song. There's great use of dynamics in the background vocals — from little swells sprinkled in the verses of Lost In Japan to using vowel changes in Sandcastles to help build the volume and emotion, every decision seems well-planned and thought out and the group executes beautifully.

The three soloists all do a wonderful job. Will Whisenhunt easily glides through Lost In Japan and shows great range in his falsetto during the choruses, and Leandra Wahlen's solo comes across as confident and fierce, while also showing off great range and vocal control in the choruses on some very tricky and tastefully placed runs. That all said, the highlight for me is Alyssa Sposato on Sandcastles. Like Wahlen, Sposato has some wonderful runs in her solo that I constantly want to replay and listen to/attempt to mimic over and over again. However, what really impresses me is her vowels on words like "promise" and "broken", where she follows Beyoncé's example in over pronouncing the "ah" vowel. It's an attention to detail that goes a long way, and one that I think more soloists should spend more time on in general. For those of us who have sung in choirs, we are all too aware of choir directors making a big deal about vowel shape on certain words in a piece, and it's something that I think gets overlooked when singing pop music in a cappella. It's not to say that we need to have over-exaggerated vowels when singing Bruno Mars or Beyoncé, but taking the extra few minutes to map out what part of the word is held can make all the difference in the listener understanding the lyrics of a song.

So, as I mentioned, all three songs individually are very well done. Evaluating the EP as a set leaves a slightly different impression that prevents me from giving it a "5". The tracks all sit in a similar tempo and feel, and I would have liked more variation in a set like this. If the final track was something a little more uptempo than God is a Woman, I think that would be a better contrast from slower Sandcastles. Overall, this is a great small collection of tracks that the group has put together, and I hope to see a full-length album from these singers soon. Or, at the very least, a chance to see the Pitches live at an ICCA competition once we're in front of the pandemic.

Promise is the recording of the 2020 ICCA competition set by the Potsdam Pitches, telling the story of love gained and lost. This release is a dive into a story that seeks to highlight what the group is about, revealing an ensemble that is technically proficient and able to deliver powerful moments, but lacks the subtlety to make such moments truly stand out.

Lost In Japan in many ways feels like everything about the group in three minutes. There's complex chords aplenty throughout the piece, different rhythms all the time to keep the listener engaged, and snippets of Taylor Swift's Delicate thrown in just for good measure. Make no mistake, this piece is flashy, but in some ways it feels like the group is trying too hard to show off every tool in the arsenal without ever considering its purpose. As such, the overall impact is lessened. Dynamic changes are muted and gradual over the piece resulting in an overall swell, but there could be so much more by having stark dynamic contrast in the middle of the song to make things more interesting.

Much of this is corrected in Sandcastles. This track is absolutely magnificent. Soloist Alyssa Sposato is on display here and gives a performance that will leave the listener dangling on every word. It has the microdynamics and dynamic punctuations I had been hoping for on the previous track. Arrangers Leandra Wahlen and Andrew Richardson outdid themselves, setting up the soloist to succeed at every possible turn. My biggest gripe with the track is that it ends so suddenly; I would have loved to just hear more of this song.

The album ends with God is a Woman. This closes the story arc on the set, telling the tale of love gained and lost and the subsequent recovery process. In the middle of the piece, there's a slam poetry voiceover to directly tell the story of the piece. I can appreciate the sentiment, but it feels like overkill to me because this section adds little to the overall arc of the piece. The arranger created a third verse when the original two would be just fine to tell the whole story. This number then ends with a key change and a really flashy chord that almost feels like a relief that its over rather than a satisfying ending.

Overall, despite the nitpicking I'm doing, this release does exactly what a good competition set should do. The recording is a twelve-minute showcase of exactly why this group should win. It tells a story and sticks to the strengths of the group to really deliver the best product possible. This makes me excited to hear more from the Pitches, because there's got to be more talent than the few voices and arrangers showcased, and more opportunities to hear the group would give an understanding of where strengths and weaknesses really lie. Keep your ears open for the next release from the Pitches, because it could be even better.