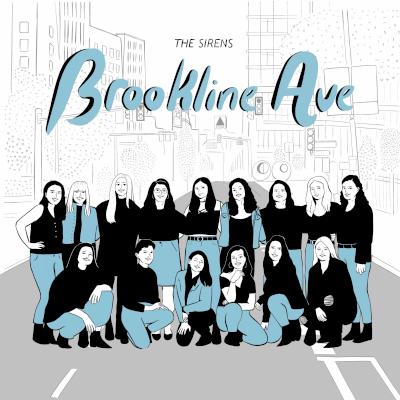 The joy! The joy that comes out of the speakers while listening to the Simmons Sirens sing their music is palpable. The musicianship is memorable and their style is unmatched. Brookline Ave is very definitely worthy of a 15-minute investment of ear power.

The album sits in its particular pocket of sound extremely well. As a sampler, there's just enough groove and just enough pep to make it interesting for a bit. And as an EP you don't get too weary of the tempo sameness as it is more indicative of consistency in the groove than a detrimental habit. With intriguing arrangements by Mel Daneke and Tyler Nordin, and deft production by Plaid Productions, the Sirens say "Hello world!" in the most ebullient way.

American Boy benefits as the opener because there is nothing to compare it against and it sets the bar of the sound that you should expect. It sets the bar too high, though, because none of the other three tracks vary enough from this opener to make them stand out as much as individual tracks on an EP need to. When you only give us four tracks, each of them needs to be their own point on the compass.

Such is the truth about this little trip down the road of goodness, that more dynamic and rhythmic variety would have sent this recording in the upper echelon. High Hopes would benefit from cranking the loudness 2 degrees and bumping up the bpm by 10. It's just a tad bit lifeless when it should be like rush hour on the autobahn.

The opposite is true with the closer, The Village. It's pretty grand, but I'm missing the storytelling gravitas inherent in the song because of the brightness and middling tempo. The song is either an angsty shout at the wind or an devasting dirge and it's all determined by the tempo as to which intent and emotion emerges. I know I'm too partial to Pitch, Please's masterful performance, but that will be what I expect from every group that performs this song from now on. You should hurt from performing and from listening to this piece: a deep, breathtaking ache.

This presumed negativity should be read as having a modicum of restraint, as the base fact is that you need to listen to the Simmons Sirens: they are amazing and will be doing supremely great things for the near future. The nuances are what keeps this great album from being truly extraordinary.

Brookline Ave is a pleasant release from the Sirens, but the music needs more thoughtful crafting in its delivery.

The cherry on top of this dessert arrives right at the start with American Boy. A twice-nominated CARA track, American Boy is so darned joyful it's impossible not to enjoy yourself with this jam. From the funky, playful rhythms and percussion to the deft featuring of background voices getting front microphone time, this one is perfect for summer at the pool. It's almost too good, because nothing is quite as delightful on the rest of Brookline Ave.

Unbreakable Smile has a nice laid-back swing, but the "la da da da dee" motif stitching the song together sounds more like the audience sing-along portion to close a song, except it keeps coming back for the whole song. This is a matter of source material and not a performance critique. Maybe you won't mind. Maybe you'll dig it because you love Tori Kelly. You're probably singing along with the group anyway, but I find it too repetitive.

The Sirens are back on solid footing with High Hopes, especially with their sweet bass slide and lush lower octave treatment. In an interesting arrangement/editing choice, the Sirens keep this song at a short but sweet 2:30; it doesn't feel abrupt, it feels just right: feature the best, and leave out the rest.

The Village closes out Brookline Ave. Not that programming matters as much in the digital music age, but letting punchy High Hopes be the closer and somber The Village have the third slot makes more sense to these ears. As sung by the Sirens, The Village is so gorgeously, delicately choral that it nearly sounds like a happy ballad, missing the intent of the lyrics, which are, quite frankly, pretty devastating. An arrangement approach that featured more individual lines and voice part sections in a call-and-response/us vs. them format would have permitted more stylized deliveries to bring in some edge and power.

The Sirens have many beautiful voices in their group, and plenty to look forward to as they continue their recording projects.

EPs are underrated, especially in the a cappella world. A clean four-to-six is far more accessible than a messy twelve, and it makes for much easier replayability as well. That being said, an EP will be much more scrutinized on a song by song basis: every track needs to be a winner, and every track needs to further solidify a group identity or consistent tone.

Brookline Ave is solid but limited in meeting this expectation. It's strong, but I keep wanting it to take another step further while it just barely shies away.

American Boy kicks off the EP and represents most of what I do and don't love about the release. The intro is rich and interesting, and the listener immediately gets a sense that the Sirens have a solid, well-blended core sound with strong solo chops (shoutout to Hannah Bryan-Nelson). However, on multiple occasions during the song, when the group seems like it's about to go somewhere powerful or extra intense, the singers seem to back away at the last moment. After listening, I'm left thinking that what I heard was nice, rather than going even further and eagerly awaiting the next song.

But American Boy does at least lead well into the next song, Unbreakable Smile, which is my favorite on the EP. It doesn't necessarily address the issues I had with American Boy, but Unbreakable Smile is inherently a more laid-back, effortless-by-nature piece and the Sirens treat it precisely as that. Nina Nguyen delivers some beautiful vocals with a fantastic sense of rhythm that flows beautifully with the background music.

High Hopes isn't a bad track, but it doesn't really fit the EP. The vibe of the song mismatches the other three tracks, and the Sirens' attempt to emulate Panic! At The Disco's original overwhelming intensity falls short, leaving the track feeling unfulfilled.

The Village is good. That's pretty much it. It's a song with lyrics suggesting a major emotional connection with poignant messaging, but I don't feel that listening. I feel a solid musical product and the Sirens successfully move through the motions, but especially for a finale ballad, emotional catharsis is all but essential. Listening to the original by Wrabel, there is a greater sense of dynamic contrast, a change of urgency from verse to chorus, and engagement of the background instruments with the leading lyrical delivery.

This four-song set makes for a solid listening experience. But will it inspire, and will it distinguish itself from other women's-centered a cappella groups? I'd argue there is far more potential the Sirens should be tapping to achieve this.

The Simmons Sirens check a lot of boxes to make a solid experience on the group's latest EP, Brookline Ave, but lack an X-factor that would break excellent territory. There are many potential right answers for what this X-factor may be, but finding one is often what creates new standard-setters in the a cappella world. And I'd love for the Sirens to become the standard.