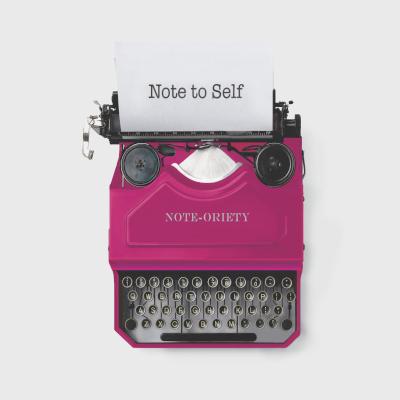 Apparently my love and respect for Virginia-based a cappella music knows no bounds. I've been a longtime fan of so many groups and people from that state (especially collegiate and Contemporary A Cappella League groups) that I sometimes have difficulty not directly comparing groups and recordings across actual generations of time. Par example is the fact that most of the performers on Note to Self were in kindergarten when my review of Fusion was published in 2006.

More often than not, the music lives up to the comparison and intense scrutiny from a particular favorite era of my experience with a group's existence. And that's what we have here with the mid-pandemic release by Note-Oriety from James Madison University, Note to Self.

I'll start out by saying that I could literally pull almost any quote from my past reviews and place them here in this review — both the accolades and the criticisms. Again, the performers have super sweet voices. Overall, this may be the best sounding cohort of soloists that I've ever heard from Note-Oriety. And the backgrounds are effervescent in execution. But sweet rarely makes interesting. And that's the issue here. All treacle, no treat.

The album sounds like one long song. There are no real dynamic changes, the tempo is that ever-present evocative fast ballad — you know the sound, not languid enough to be a full-on ballad, but nowhere near any sort of up-tempo bop. If I didn't love the songs so much I would have laughed out loud at these two instances. In God Is a Woman there is a bridge obbligato of I'm Every Woman — lyrically it makes sense, but man is it inappropriate and detrimental to the overall appeal of the track. Farther down the track list, the beat drops and the drums kick in on Dreams only to have that same 4/4 trolley car push along the track. I've called the sound milquetoast in the past, and in today's climate I say that would still be accurate if not appropriate. There is just a lack of daring, excitement, risk or anything that makes a listener gravitate toward the sound. It's great ambient background music. The album needs to have more bang from the women who banged the best banging Bang Bang other than the original performers.

I do have to call out Hannah Cumings on Ocean Eyes as her voice literally feels like honey pouring out of the speaker. I am captivated and mesmerized. Good job. Emilie Bozik on the partnered song Bellyache is great as well; the two complement each other terrifically. Too bad that the transition between the two songs is so jarring; it would have been my favorite track on the album.

The duet with The Madison Project may really be the best track on the album. Seventeen starts out with a jaunty introduction that almost immediately slacks into that mid-tempo abyss before fooling us with it's dirty slow swagger leading into the chorus. So each time it comes in it is an exciting moment that is greatly parlayed into the superfast outro each time. MORE OF THAT PLEASE.

In essence, the album is "3" content blessed by "4" execution. You'll enjoy listening to it a couple of times and then be done — which is just fine. I just hope that the group one day decides to take risks in the studio. I'm sure producer James Gammon would be all for it. Note to self: release the first mix instead of the fifth one. Cut or double the tempos so that a song is either two or eight minutes long. Deliver something that brings some kind of umpf, danger, or emotion to the project. Your wider audience deserves it.

My note to self: Note-Oriety pushed a lot of content out in this release. Some of the music is spectacular, some is just alright.

An album doesn't require a running theme or concept, but some level of focused organization is necessary to make it feel whole, to make your music feel like a specific, intentional, artful project. Note to Self is definitely a jukebox of tunes: no weak songs for your quarter, and a few crowd-pleasers, but mostly pieces played out in different styles that simply sing without demanding our attention. Yet the talent in the leads and bursts of creativity in this release suggest Note-Oriety could easily be a professional, ticketed event of performers.

God Is a Woman deftly shows off one area that Note-Oriety did give prominent focus: slick, showy production work from James Gammon. This piece is all style, and the soft diction from the lead creates an alluring seduction impossible to resist. On the flip side, what's your personal comfort level for production becoming too synthetic in a cappella? Processed and reverb-heavy Seventeen goes past my limit for the source material, even though I adore the assist from fellow campus group The Madison Project — a snap-your-head-up surprise to hear a new mixed sound drop mid-album, and surely great memory-making for both collegiate groups. Production work and ensemble work come to a beautiful juncture in Runaway, a piece with an evocative atmosphere that peels off in layers. As a listener, I'm gripped to hear what's coming next. Perhaps that's what's missing from most of Note to Self: more innovation, more audible and distinct "settings" for the music at hand. Everyone is an arranger; who's creating something new?

We definitely get something new with Dreams, a unique arrangement interpretation that keeps the folksy Stevie Nicks style in the lead but contrasts it with fresh beats and moods in the backs. The soloist really thought about the words, too, giving intentional emphasis to create intimacy, like the way she whispers "what you had" at 2:46. Speaking of understanding the power of words, the lead for I Don't Think About You has the message of this song ringing around her heart, pouring it all out until her throat's raw. This kind of poignancy is one you can't turn away from and leaves a permanent connection between the group and the listener (because you'll say: "I like the way Note-Oriety sings this one."). Fall in Line has a similar captivating power, due to the red hot duet blazing away on the choruses. Fire danger: way too damned high! This is a great closer for a recording or a live show.

The standout moments on Note to Self are many, but the project as a whole doesn't warrant a spot on the Most-Played library shelf. The task at hand is sizable but not unachievable for these musicians: give us a whole record that stands out.

There is a lot to like on Note-Oriety's latest album, Note to Self. As is typical for this group, the album is full of glossy, powerful pop songs performed with strong leads. But there's also something missing, too; I might not have noticed it if I hadn't reviewed so many of the group's latest albums, but there isn't a lot of growth here from the group's recent recordings. The things that bothered me about XX and Note-Oriety still bother me here (and perhaps they're even more noticeable, because I feel like we've been here before).

The song's recordings are all good-to-very-good, but they could be even greater with more, more, more: more dynamics — specifically more quiet and more growth — more feelings, and more personality. There are some beautiful moments on Evergreen; the opening is lovely, and percussion throughout is an excellent balance to the leads. But the big, climactic, booming ending doesn't quite boom without more dynamic range, and so much of the song's emotion is lost because the listener doesn't go on a true journey with the singers. Velvet Elvis starts and ends in the same place, and even though there's one chorus late in the song with a sparser arrangement, it's too little too late in terms of dynamic variance.

There are still some real standout moments on Note to Self. Runaway is particularly striking: no surprise, it's one of the few songs with a lot of variance in dynamics and arrangement throughout, making it particularly ear-catching. Seventeen features The Madison Project, and the introduction of male voices for one track makes this song stand out from the rest.

There's nothing unpleasant to listen to on Note to Self; the album is well-performed, and the songs really fit in Note-Oriety's wheelhouse. But there's also not much that makes this album stand out from others. Songs are pleasant but don't have many "wow" moments, and that may just make Note to Self an excellent yearbook album — it sounds lovely, it's pleasant to listen to, but there's also not a lot about this release that makes it stand out from the crowd.

Note to Self streams on Spotify.