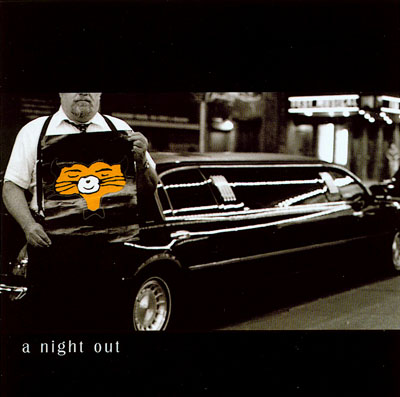 I just finished listening to the Princeton Tigertones' album, A Night Out, and I think I'm experiencing deja vu. It sounds just like every collegiate a cappella album released in the early nineties. It's full of overdone a cappella standards and three originals (one written in the fifties and two written recently). The only reason I gave the album a rating of 2 for innovation/creativity is because of those originals. Don't get me wrong, those overdone a cappella standards are great songs. But if you're going to put out an album nowadays that features this many of them, then they'd better be just amazing! The covers on this album were not amazing.

All of the arrangements on this album feature the ever-popular syllables: doo, bop, ooh, and ahh. They seem reluctant to venture far from that formula. There is very little in the way of dynamics as well. The combination of these two problems creates a very uninteresting album.

This is your typical group-stands-around-some-mics-and-records-a-few-takes deal. After they picked the best take for each song, they threw tons of reverb on it and burnt it to a CD. The mix and blend at times are out of whack. The singers are not all together at some points, as far as rhythm is concerned. The booklet and printing look top-notch (although they did not credit the composers of any of the covers; not good at all), but the CD inside feels as if it had been shortchanged.

I understand that many groups don't have tons of cash to spend on a recording studio. But if you're going to produce an album like this, don't expect anyone to purchase it other than friends and family. This is your typical example of a Yearbook CD: a CD produced to represent what the Princeton Tigertones sounded like in the 1999-2000 school year. The singing is okay. Not difficult to listen to, but difficult to listen to a second time.

The Princeton Tigertones' A Night Out features a wide variety of musical styles: classic doo-wop, Beatles, a little jazz, the odd Top 40 hit. Unfortunately, each track suffers noticeably from the same hard, forced, unbalanced vowels, keeping this album well below par for a group with the history and stature of the Tigertones.

I don't think I've ever heard the "a" in a "a cappella" hit quite so hard and edgy as in the opening track on this album. The Tigertones have an almost gospel choir-like quality, with swoopy, punchy crescendos, biting attacks, and loose, mostly sloppy cut-offs.

Other musical choices left me shaking my head. Harry Connick's Heavenly is performed at such a glacial tempo that it was virtually unlistenable. College groups, take this track as a dire warning when considering a "slow version" of anything. At other times, the blend and balance are so wonky that I can't tell if there's a soloist or not, as in In the Still of the Night.

But just when I was thinking that this group should stop yelling and start singing, they do a delightful Lord, Got Tomatoes, a passable Loch Lomond, and two catchy originals by group member Garrett Johnson (also a fine soloist).

The Princeton Tigertones need to get back to the basics. When they do, they'll make an album worth buying.

This album is a bit of a mixed bag. Some really fun numbers, some listenable tracks, and then a couple that were, well, a bit boring.

Overall, the singing was quite good, and the harmonies well constructed. The more driving, upbeat numbers shared a tendency to sound a little raucous. This was mainly caused by a tendency for the supporting voices to drown out the lead vocals. In a couple of tracks, most noticeably Good Ol' A Cappella, there was a bit of oversinging going on.

The balance on the softer numbers was definitely better. Here, though, boredom occasionally crept in. Some of the ballads were a bit "careful". This group needs to learn the art of singing a ballad softly and smoothly while still making it interesting. East of the Sun and Blackbird are the main offenders here. Better breath support and a sense of suspense in the singers will achieve this. A bit more clarity from the soloists would make a difference here too.

Having said that, Loch Lomond is a lovely track. The use of dynamics and a really wonderful solo voice from Graeme Ramshaw make this a definite winner in the ballad stakes.

My favorite track on this album was Kiss the Girl, from Disney's The Little Mermaid. Great arrangement, nice mix and blend, and great sense of motion; this is a lot of fun. The other track that I (briefly!) enjoyed was Take 2, an original composition by Garrett Johnson. No words, but some lovely squirmy chords. I was really disappointed, however, that it only lasted just over a minute. I was looking forward to where it went next!

The only track I really didn't like on this album was Lord, Got Tomatoes. The lyrics are quite amusing if you take the time to listen, but the arrangement isn't very nice, with some odd chord progressions making it sound a bit muddy in places. Generally, it sounded like a bit of a pub-chant. You know, one of those songs where someone sings a verse, and everyone joins in the chorus really loudly!

Don't miss the hidden track. I nearly did! At the end of Shower the People, there are 33 seconds of silence before a nice version of Silent Night with a couple of unusual chordings which work well. If I hadn't left the CD playing on repeat just before submitting this review, I would have missed it altogether!

I liked the insert. The cover has a picture for you to think about, with formal photos of the guys and a list of who's who inside. Even further inside there are some candid shots. When do they study? They seem to be having a lot of fun! I like the pitch pipe under the disk, too.

This is an album which will probably get a regular airing in my collection. It's a fun, middle-of-the-road album, although I'll be retaining my right to press "next" in a couple of places.