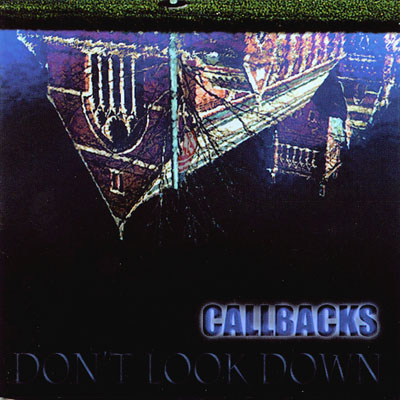 The Harvard Callbacks have put together a lot of pretty good stuff to put into their latest album Don't Look Down. While every song is a cover, they at least picked some interesting and less-performed covers to do. (I'm very excited that groups are covering Guster.) Just a note while we're discussing who originally wrote the songs on the album: A Nightingale Sang in Berkeley Square was NOT written by Harry Connick, Jr. It was written by Manning Sherwin (melody in 1915) and Eric Maschwitz (lyrics in 1940). You may have first heard this song on Harry Connick, Jr's album We Are In Love, but he's not the "original performer". I understand the reason for listing "original performer" in the CD booklet (wouldn't you be more excited to see a song listed by Harry Connick, Jr. than by Sherwin/Maschwitz?), but you should really list the actual composer and lyricist of each song.

The singing on this CD is very good. The blend and mixing was not as good. There were many times where the mix was just off. At many points, the parts in the backup were not mixed right and at other points the lead was just lost in the mix. For example, in Female of the Species, when they get to the part "How could heaven hold a place for me?", the lead and harmonies TOTALLY get drowned out. This happens all over the album. For the most part, the soloists on the album sounded very good. The lead singer on Jump in the Line sounds just like Julio Iglesias; it must be the warm vibrato.

Mixing notwithstanding, the production quality is very good on this album. Very clean sound. Good use of effects to make the arrangements more interesting. The VP is very good and recorded very well (props to da VP!). I'm not a big fan of the Lo-Fi vinyl effect used on A Nightingale Sang in Berkeley Square. The lead sounds like he's singing on a record but the rest of the group sound like they're on a CD. I'm not sure if the effect was put on the whole mix or just the lead, but it was only apparent on the lead. The difference in sound made the whole track sound disjointed. The inclusion of the two live tracks (Wide Open Spaces and Angel) was a nice touch. I didn't realize these were live until the applause at the end. This is a good thing. Very nice live recordings.

Overall, this is a pretty good album. There were, however, some minor rhythmic, pitch, and mixing issues scattered throughout the album. This is not a bad CD to own. Pretty cool songs, pretty good singing.

In the 2000 NCCA Competition, the Harvard Callbacks were one of six finalists from across the country. I had the esteemed pleasure of seeing them perform live at the East Coast Summit in Boston last year where they performed as a fine-tuned machine on stage with full-out choreography and great vocals. I'll attribute the few musical flaws on this project to poor studio work.

Some tracks on Don't Look Down absolutely shine. Good Things is a fantastic combination of lead vocals, harmonies, and background energy. The arrangement by Royd Chung is one of the finest on the album because it simply allows the song to be expressed. Nothing excessively creative or innovative here, just a simple solid arrangement that focuses on the song. This form of arranging is something that seems to be lost in collegiate a cappella today.

The largest flaw on this album, which has nothing to do with the music, is that there is no consistency on this project from beginning to end. For example, in the middle of the album they present to you four different covers from four different genres of music (Harry Belafonte, Harry Connick Jr., A-ha, Dixie Chicks). It is very difficult to listen and truly enjoy an album when the mood and inspiration behind the music changes every song.

I am going to let all of the collegiate a cappella groups out there reading this in on a little secret. So often, collegiate singers ask me, "How do collegiate groups like Off the Beat produce such high quality albums every year?". You see, it's really quite simple. The first key is that they have money from an alumni association or some other means to "properly" record an album every year. By "properly", I mean that they can budget extra time in a recording and mixing studio, and have access to a first class engineer and studio equipment with which to record and produce the album. It is very easy to tell the albums that spend a few months entagled in computer software versus the ones that only got to see the inside of a computer for a day. The second key is to have a consistent album. OTB for example, focuses on one major genre of music, mainstream-alternative. Listening through this album made me want the Callbacks to be more consistent with one specific genre of music. Always remember, an album is different than a live show. You don't want to record your set list on an album. You want to record a consistent, themed, organized project.

Having said that, this mutt of an album has some stellar song choices. They chose a few songs that I was previously unfamiliar with, but really came to enjoy (Independent Love Song, Female of the Species). The greatest song choice on the album for me was Jump in the Line. (Remember this one from Beetlejuice?) This song never got to take off because of lack of energy, but great choice nonetheless, especially for a live show.

Soloists on this album tend to fall on the solid side of the fence. Megan Gaffney, Erika Rhone, and Alvaro Redoya are in a league of their own, but a few other soloists on this project (Pinki Mishra, Neha Mahajan, and Mike Petrillo) who aren't as mature vocally are still very enjoyable on their respective songs.

The weakest track on this project is Black Balloon. The soloist seems to focus so much on the emotion of the solo that he forgets to sing. Unfortunately this distracting solo made me fast forward through an otherwise solid song.

Good effort from one of the country's premiere collegiate a cappella groups. I wouldn't call this album spectacular by any means, but it did have a lot of redeeming qualities, and will get some continued spins on my stereo.

The Callbacks have made a good modern alternative rock/pop album in the vein of Stanford's Mixed Company, U Penn Off the Beat, and virtually every other mixed college a cappella group in the nation.

Like most of those groups, the Callbacks play it pretty straight. Imitative arrangements are the rule, with innovation limited to odd-sounding syllables and choruses of different songs by the same artist sandwiched one into the other.

And while Don't Look Down would have been amazing even five years ago, it falls pretty short today, especially on production. There's no bottom end at all, and the girls sound far thinner than (I believe) they would live. I would love to see the Callbacks go crazy and make their next album as close to radio-quality as possible.

Also, I was sometimes puzzled by their choice of repertoire. The Barenaked Ladies, Aqua, Mariah Carey, The Bodeans, and Lauryn Hill all wrote amazing songs, but you won't hear them here. Instead we're treated to lesser known B-sides that left me a little frustrated. I wanted more songs like Female of the Species — songs that I barely recognize, but that make me say "Hey, I know this song...it's good".

Otherwise, good soloists, blend, and balance throughout make for an album of even and consistent quality, even if that quality is well within average. If you buy this album, be prepared to thoroughly enjoy every track, take it out of your CD player, lend it your best buddy, and never ask for it back.

To order for delivery within the US, send a check for $18 to

The Harvard Callbacks
P.O. Box 1251
Cambridge, MA 02238-1251
To have a CD sent outside the US, contact the group by email at c-backs@hcs.harvard.edu for pricing information.
×