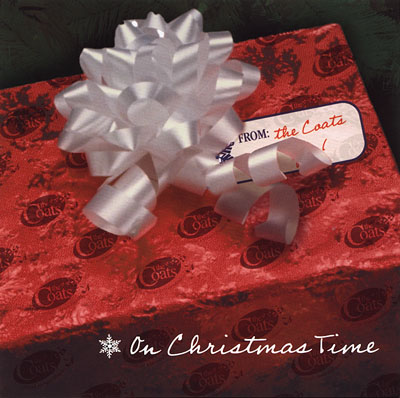 I really have to applaud Jamie Dieveney for his very fresh take on classics like Jingle Bells and even Little Drummer Boy. The first has a percussive motif that complements the tune in a way that the sing-song melody never did, while Little Drummer Boy begins in a very traditional manner but leads into a bridge that's quite modern and cool. Silent Night has a very distant, echoey sound that is nostalgic and more mysterious than I've ever heard it.

Although The Coats keep the production of this album very slick and modern, they are not beneath throwing in the very comical Mr. Grinch, which is thoroughly enjoyable. What's Christmas without a bit of fun and cheer? Similarly fun is the swung Winter Wonderland, one of my all-time favorite holiday tunes.

As I sat here, listening to this album, I tried to figure out if there was anything negative I could say about On Christmas Time, and honestly could find very little to fault. I mean, what kind of review doesn't offer the reader some kind of balance between good and bad? There's got to be something....the only thing I could come up with is that I could have done without the techno-like God Rest Ye Merry Gentlemen, the only sample of Mr. Dieveney's arranging prowess that I didn't like. Additionally, I also found the title track to be a bit cheesy (especially the percussion track!). But honestly, folks, I am so nitpicking here. If you enjoy Christmas music, this makes a great addition to your collection, no buts about it.

There's not much to say about The Coats' first Christmas album: their smooth blend covering funky arrangements of old holiday favorites, with a few originals thrown in for credibility. All in all, an easy listen, with little to fault.

The one requirement of any decent Christmas album, naturally, is good arranging. The familiarity of the material demands that something interesting and dynamic be happening on every song, beyond the usual bag of a cappella arranging tricks. Luckily, arranger Jamie Dieveney comes through nicely, providing upbeat and interesting variations on every song. He falls a little short on Silent Night, but who doesn't? A decent arrangement of that song is the alchemist's gold of the holiday repertoire, but he manages an adequate version (the following track, Winter Wonderland, is more up their alley).

The Coats also resist the urge to simply "modernize" the traditional numbers. They utterly refuse to turn Little Drummer Boy into a vocal percussion showcase (thank God), and instead feature a trumpet-like fanfare at the climax — very effective. Likewise, God Rest Ye Merry Gentlemen is a 90-second sprint; shifting, jumping around, and completely delightful.

The requisite originals are not some of The Coats' best work, reminiscent of the bland contemporary-pop holiday music heard at shopping malls, but they fit in nicely. Overall, an admirable effort and recommended for the a cappella fan looking for something new for the holidays.

Christmas music is a funny thing for me. My brain stops being sick of it just in time for the holiday season to start, and then it begins screaming for mercy after just a couple days of omnipresent, cheery goodness. Needless to say, an album of Christmas music wasn't at the top of my wish list for reviews just as the days were getting warmer and winter was slowly becoming a fading memory. But then I actually listened to the disc, and WOW! I really liked it.

The Coats have a lot to be proud of here — a smooth sound with a deep, round bass, tight harmonies, and great sound production. And with that to work with, the great arrangements and these guys' charisma really shine.

The arrangements, all by Jamie Dieveny (except for two by Dieveny and Bill Gibson), put refreshingly new spins on most of the songs. There's a lot of playing with the meters (e.g. Silent Night in 4, Jingle Bells in, well, lots of things), and several styles tend to pop up throughout many of the arrangements. God Rest Ye Merry Gentlemen has a phenomenal brief pop-style breakout right near the end that I couldn't have anticipated. Actually, pop segments appear in lots of songs, and they make it work, so your attention is grabbed and held successfully.

What also really holds your attention is The Coats' charisma. Their excitement and enthusiasm are clear and contagious, and they can charm you with the best of them when it comes to the slower numbers. Mr. Grinch is playful and spooky, with a great solo by Kerry Dahlen that was hopefully as much fun to sing as it is to listen to. And the smooth and heartfelt singing in Silent Night captivates my attention just as much as the previous track.

The originals on the disc, of which there are three, are really the only letdowns. They're very poppy, but also very generic. I would listen, hoping for something to grab me, interest me, or amuse me. But they just stayed the same, and I quickly forgot them. The soloists, too, get a bit poppy for my taste....most of the time they were quite solid, but there were times I wished they had supported themselves differently/better, and had removed some of the scooping.

In all, On Christmas Time is about as good as I could have expected from an a cappella Christmas album. If you're looking for something of this variety, you will not go wrong buying this disc.