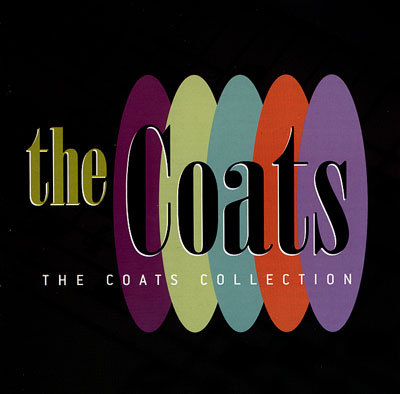 Chock-full of pop confection, Collection is a delightful listen for most anyone who enjoys a cappella. You'd have to be seriously disturbed if you couldn't appreciate the tight harmonies, great sound production, and fabulous singing on this album. The album is, as its name declares, a collection of "best of" songs from The Coats' five previous albums, and a couple new tracks. On a couple tunes, the more simple production and arrangement styles expose the younger, less experienced Coats, but the disc progresses nicely and even the slight variations in studio and harmonic work don't detract from the overall enjoyment of this album.

The best songs on this album feature The Coats on uptempo, uplifting material that allows their soloists to really break out, like the opening track, Don't Bring Me Down, and We Regret. The aptly named Cool For You is both wonderfully arranged and fabulously sung to completely match the mood and lyrics of the song. One of my favorites is Now You're Gone, an accompanied slow jam that just gives you chills down your spine.

Particularly noteworthy is the fact that many of the songs on this album are original to The Coats. Group member Jamie Dieveney wrote or co-wrote eight of the fifteen songs on this album with great success, for the most part. One of the only weaknesses of this album is that some of his lyrics are so generic as to be painful to endure, like Your Joy, whose mundane words are exacerbated by the song length (almost five minutes!) and lack of a really great hook. The song is not nearly as catchy as many of the others that Dieveney has written, like the poppy Open Up, jazzy Dance Alone, and the power ballad Now You're Gone. While these tunes also consist of generic pop wordings, their hooks really sink into your brain and you can't help but tap your toes. His best work (and the best song on the album) is definitely the uplifting Nice To Say, which opens with a beautiful piano intro and is sung with such delicacy and feeling. I'd give it a "6" rating if there were one.

I know that The Coats are known for their rendition of the classic I Can See Clearly Now, but honestly I'm not much impressed. The arrangement is so simple compared to other songs on the album, it could almost be a college arrangement (not to knock the skills of quite a few talented collegiate arrangers!). I think they do much better on straight pop tunes.

In any case, I think I've raved enough. Unless your brain is chemically rigged to explode if you listen to pop music, you're bound to enjoy this album.

Showcasing one of a cappella's best and longest-lived contemporary groups, The Coats' Collection spans seven years and multiple albums. Not surprisingly, the tracks cover an array of eras and styles. Originals dominate (uptempo, ballads, AND wacky stuff), with a sprinkling of standards, a handful of live tracks, and even some accompanied material.

The album features only previously released material, so you hardcore fans will find nothing new. But the rest of us can enjoy the group's impeccable tuning and blend and Jamie Dieveney and Bill Gibson's evolving songwriting skills. And although the positive messages of their lyrics sometimes slip into shallow schmaltz, songs like Your Joy work just fine.

The cover tunes are wisely chosen and adequately executed (including the near-perfect opener Don't Bring Me Down), and I believe, after listening to this album, that I've finally heard a good version of A Cappella.

All in all, a fine compilation and a worthy addition to any a cappella collection.

Collection is a greatest hits compilation that spans just about the whole career of The Coats. The track list seems to be littered with songs that every group in the world has covered at one point or another, but that old familiar "not this again" feeling is evaded once you realize that The Coats really were among the pioneers that did this contemporary a cappella stuff first. This album nostalgically shows us the ways in which a quartet of really good singers can fill out a song and make us smile. It includes straight-ahead four-part songs, both live and studio, both original and covered, as well as some experiments with drum tracks, vocal percussion, and full instrumental backup tracks.

The Coats' strength has always been their ability to evoke the rhythm, feel, and structure of popular and familiar songs using just four elegant vocal lines. Nevertheless, the more involved studio tracks still capture their beautiful tuning and solid arranging instincts. These guys can sing! There's hardly an off note anywhere on the album, and the balance is flawless even on the live tracks. On almost every song, I found myself nodding along to a pretty straightforward vanilla arrangement, out of which would suddenly jump a brilliant, thrilling, crazy jazz chord that just blew me away, or a ridiculously high tenor 1 solo line that just gave me goosebumps. My favorites for both of those are I Can See Clearly Now, which is way too much fun to be as simple as it is, and Bridge Over Troubled Water, which is breathtakingly beautiful.

What you're not going to get on here is a new, cutting-edge feel. The Coats have been doing what they're doing for years, and when they change their style it has always been to suit their own passion for the music. Audiences have benefited from that sincerity, since these guys have the talent to make their love for the songs shine through (despite the occasional nasal vowel). But the modern vocal band junkie will not get that "How Did They Do That!?" feel that so many seem to crave these days. The instrumental originals and the classic covers all have the same charming bounce to them, but the charm comes from the relative simplicity and the honesty with which the music is approached, not from intense studio engineering or from tricky arrangements.

Collection is a celebration of The Coats' careers, and is thus a tribute to the beauty of vocal harmony, plain and simple. I liked the album as a tribute to the roots of a cappella and a reminder of the first reason this whole thing started — people love to sing. Others may feel that The Coats' style is old-fashioned, that it's all been done, that they shouldn't have gone through their instrument-using phase, or that it's just not their thing. While I certainly can't begrudge them those points, such people are, in my opinion, missing out. This is a fun album full of songs that you'll feel you've known forever, done in a style that will make almost everybody smile at least once or twice.