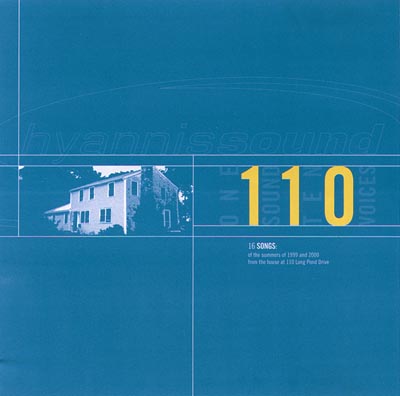 Hyannis Sound gets together each summer on Cape Cod to sing. It's made up of ten or so men who sing (or sang) in college a cappella groups around the country. I saw these guys live a couple of years ago at the East Coast Summit, and they were a very tight group.

They've put together an album of sixteen songs from the summers of 1999 and 2000. There are a eight studio track and eight live tracks. I personally am not a big fan of live a cappella recordings, but these are very good. On some of the live tracks, there's a little too much room-sound (natural reverb) for my taste, but it adds to the live flavor of the tracks. Most good live recordings record directly off the mixing board, and the singers are usually individually miked, but with a larger group such as this, there are usually a few room mics.

The arranging is very polished, probably because the members hail from some of the best groups on the Eastern seaboard. On some of the songs, the familiar arranging style popped out at me. When I looked at the enclosed booklet, I saw that they were all arranged by Samrat Chakrabarti. These songs really sound like a bunch of the songs he arranged on the Five O'Clock Shadow release So There. This is not a bad thing.

The recording quality of this album is very good. The soloists are top-notch. The arranging is great. Pitch and rhythm are also very good. If you're looking for a great collegiate level a cappella album, you should pick this one up. These guys are awesome.

The Hyannis Sound's album 110 is a roller coaster ride of music. The ups and downs are sharply divided along the line of studio vs. live recordings.

The live tracks (eight songs) sound hollow, with shaky tempo, off pitches, and one guy named Sam trying too hard to sound like Dave Matthews and at times sounding a bit like an English Bobcat Goldthwaite. Whenever he slipped into his natural voice he sounded great. This same guy deserves full marks for his arranging skills. Eleven out of sixteen songs were his arrangements and, I might add, all were very good.

The studio tracks (eight songs) are gorgeous. If I knew how to do it, I would burn a CD of just these eight songs and play it over and over again. The album is worth the purchase price just for track 1, Pride (In the Name of Love), which features one of Sam's beautifully complex and rich arrangements and a stellar solo by Darrell Belch. Sam's arrangement of I Will Remember You packs emotional punch with a heartfelt solo by Michael LeBlanc.

The group has great vocal percussion, great arrangements, great voices and great production (on the studio tracks). There is no doubt in my mind that all the men of The Hyannis Sound are incredibly talented. My only recommendation to the group is this: on your next album, stick with the studio tracks.

The Hyannis Sound is sort of an all-star group of all-male college a cappella. They're a group of ten men (still in school or just a few years out) from various college groups who spend their summers living and performing full-time on Cape Cod, directed by an immensely accomplished and talented veteran of the college circuit. Sounds like a formula for a good listen, huh? And it is.

Samrat Chakrabarti directed the group for the two summers during which 110 was recorded. He arranged the vast majority of the songs on the disc and supplies the percussion on most tracks, too. There are reasons he has won numerous awards for both his VP and arranging, and they're clear throughout the disc. The percussion artfully drives and supports the riff-heavy, exciting, and lush arrangements. Good stuff.

Yet all that doesn't distract me from being impressed with the talent of the rest of the group, too. The tuning is mostly on, with great tenors and a powerful overall sound. The soloists also turn in top-rate performances throughout the disc. Darrell Belch starts the CD off with a bang with his rendition of U2's Pride, and the rest of the soloists follow suit with confident, capable, and engaging solos. Michael LeBlanc and Jamie Caran are both worth noting for their sincere and moving solos on two of the disc's ballads, Sarah MacLachlan's I Will Remember You and Peter Gabriel's Washing of the Water, respectively. Caran also turns in an appropriately soulful version of Bill Withers' Ain't No Sunshine.

Half of the 16 tracks were recorded live, and these suffer in comparison to the studio tracks. The studio work is tight, clean, in tune, and artfully engineered. On the live tracks, unfortunately, tuning sometimes goes awry (Lean On Me), the group becomes less tight (most noticeably in the intros to Ain't No Sunshine and Moondance), the awesome-in-the-studio high tenor special bits are weak (Black Balloon), and the arrangements lose the full lushness that they achieve in the studio. This is not to say that the live tracks aren't good, but they seem pale compared to the studio tracks, and they comprise half the disc.

In all, 110 is a good listen if you're a fan of the collegiate male a cappella sound. There are some definite gems on the disc. There are just some rough edges that detract from the whole, too.