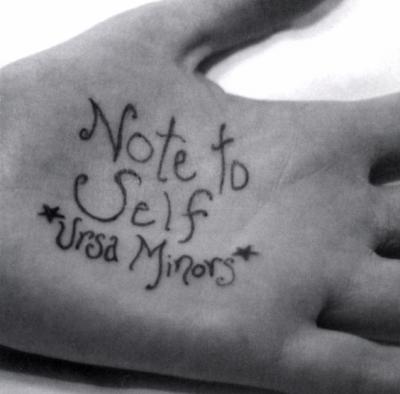 Brown's Ursa Minors did a lot of things right with this album. This bodes well for their future, which is good because this album is probably best approached as a learning process.

Strong solos are the brightest light on Note to Self. Most of the voices are strong and most of the solos show talent. In backgrounds, too, the upper voices tend to be pleasing on the ears. Also, the song list is short and well chosen, and the songs are presented without distracting intros or hidden laugh tracks. All this suggests that the group has the potential to move to the next level. To do that, the Ursa Minors need to overhaul their foundation.

Second altos, even ordinary ones, sing plenty low enough. An extra third at the bottom of their range isn't going to give them nearly as much help as a sensitive arrangement, and that's where the traditional criticism of an all-women group can get in the way. An arrangement with a lot of low sustained notes moving parallel to the upper voices is ripe for poor tuning and opens itself up to that old chestnut "girls groups aren't any good because they can't sing low". That old chestnut is crap, and women's groups owe it to themselves not to play into it.

Good bass lines for this type of group are percussive and kept separate from the upper voices. This allows the low altos to touch on their lowest notes and resonate, rather than try to sustain them and hurt their voices. It allows them to go for the root of the chord, instead of settling on a different note. (This is really distracting in Walking On Broken Glass, for example, because it throws off some of the most familiar hooks.) Differentiated bass lines also allow the upper voices to lock into a chord without getting thrown off by an out-of-tune bass note, or even one that only suffers from bad intonation. The Ursa Minors did the opposite of this — their arrangements often rely on sustained low notes in chords with the upper voices — and it absolutely wrecks their sound. Better to listen, learn, and look toward the next album.

With a little tweaking, their next album could be really good.

Any time a group records a CD, there is a lot of effort to be applauded before the actual critiquing begins. The Ursa Minors from Brown should be proud of turning out Note to Self, although poor tuning, low energy, and uninspiring solos prevent me from recommending it to anyone beyond family and friends.

Tuning is a weak point on the album; every track suffers from poorly tuned backgrounds, solos, or both. While a talented engineer might be able to fix some of these problems, it still would not replace strong, locked, ringing chords. To compound that problem, the group's blend suffers from a few voices which stick out in the mix. During some tracks, there will be a really pretty, mellow blend that is disturbed by a nasal voice moving around in there (Song for a Winter's Night).

Equally disappointing is the group's lack of energy. On most tracks, the backgrounds sound self-conscious, polite, and downright bored. Even when singing a pretty neat groove (Hunter), they don't bring their parts to life. Not only does this make the track boring and tedious (Love Fool and Roam could benefit from faster tempos to combat the monotony of the blocks), but it also makes it more difficult for a soloist to rise up and rock out. The fact that the solos are mixed so much higher than the backgrounds adds to the general low energy of the disc, as the interesting lines and general vocal power of the block get consistently muted behind the leads.

The soloists themselves are all pretty forgettable. As I've mentioned, poor tuning mars some stronger leads (Jamie Choi turns in a really strong lead on Hunter, although her tendency to hang on the underside of the notes becomes grating), and even the best soloists aren't anything too head-turning. The lead and harmonies on Real Love have some nice moments when they let loose together, and Lauren Fleischer turns in an emotional performance on Song for a Winter's Night, but there are still no real show-stoppers.

There are some nice moments sprinkled throughout. The group has a nice feel for relaxed, ambient grooves ("gotta get up to get down" in Fast Love, and the background on Dreams). Song for a Winter's Night has the tightest tuning, a strong lead, and a nice lilt that shows off the group's musicality. Beyond these few nice moments, there's simply far too much weak time to wade through on this disc. I'd say take a pass on Note to Self, and hope for better with their next release.

Listening to Note to Self was like an exercise in forgiveness. I wanted to love this album — but I couldn't forgive some of the occasionally huge problems with it. Instead, I like Note to Self, but not as much as I should.

The problem is that the Ursa Minors combine some gorgeous, womanly voices with a sometimes high-schoolish sense of pitch. On several songs I swooned, falling in love with the soloist, only to grimace at a sour chord that jolted me painfully back to my senses.

Song for a Winter's Night is a perfect example. The soloist takes my breath away with a voice that's glorious and a delivery that's warm and touching. The arrangement supports the feelings that the soloist creates. The background chords are lush, ethereal — and not quite tuned. I will get chills listening to this song for a long time, but every time I hear it, part of me will scream for an intonator. Likewise, Strawberry Wine is sweet, touching, and heartbreakingly out of tune.

The pitch problems are more forgivable on other songs, though not necessarily more or less severe. The ladies obviously had fun singing One Fine Day and Real Love. Both songs feature energetic, toe-tapping backgrounds with soloists who fit their styles to a T. The three ladies belting out Real Love show the kind of solo talent this group is packing. Swim was particularly cool, with a stripped-down, bass-heavy arrangement, a strong, Madonna-like soloist, and a tastefully used effect that I couldn't quite identify. Hunter and Dreams are also worth a listen for their interesting solo voices. I found the rest of the songs on the album to be either too bland or too off-pitch to listen to more than a few times.

With more attention to musical detail, the Ursa Minors' could have had a thoroughly enjoyable album with some glorious moments. Instead, Note to Self is often charming, sometimes inspiring, but painfully disappointing compared to what it could have been.

For current ordering information, email the group at Ursa_Minors@brown.edu.