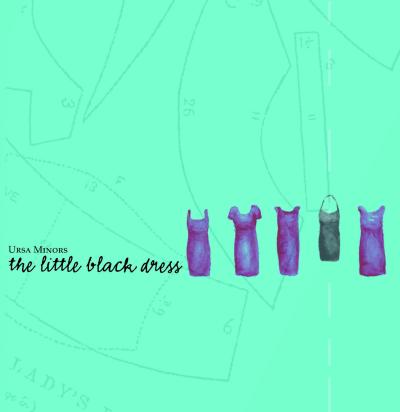 Interesting arrangements and a sultry sensibility make the new Ursa Minors album a good listen, even though its tuning will keep it out of this year's top tier.

She Will Be Loved is the song with the best chance of acappellaverse success. Willa Mamet's Aimee Mann-style solo is fantastic and Sally King's arrangement is full of interesting touches. The performance also is pretty good, other than tuning issues on the instrumental intros. The Ursa Minors have a hard time when the background becomes the foreground, as witnessed by the instrumental breaks in Ordinary World. That song features a well-conceived arrangement and an able solo by Maxine Sharansky. More than that, it gels, as do many other tunes. You get a sense that the soloists know what their songs mean, prompting a loose delivery that is a welcome change from the usual collegiate earnestness.

This is not to say these singers don't take their music seriously. This album feels full of conscious choices, from the recording layers to the unorthodox mixing in Angel, an ensemble piece that accentuates rather than blurs many of the individual voices. The Maxine Sharansky arrangement is sensitive and interesting — there's that word again — for which I can't thank her enough. Her arrangements generally have things to recommend them. For example, her spin on I Remember includes some great "instrumental hooks" that, for once on the album, are expertly executed.

I thought this album sounded fresh, a noteworthy accomplishment given the breadth of repertoire. Sir Duke and A Tisket A Tasket come across as endearing homage to their original performers, A Little Less Conversation jumps nicely and the new-new stuff fits in just fine. Little Bird is the only real sore spot, mostly because of intonation issues. The sparse arrangement isn't very forgiving, and the soprano solo and harmony lines jar against each other, even though they're pretty much in tune. I wonder if a different engineer could have fixed that, either in recording or mixing. Interestingly, Little Bird is one of four songs on the album mixed by Dave Sperandio, who also handled the expertly produced I'll Remember and She Will Be Loved. Go figure.

Engineering, I think, will be the key to the Ursa Minors' future success at making a really snappy collegiate a cappella album. This album shows they have a great sense of all the fundamentals of music and closet management (hey, they named the album Little Black Dress). The voices and arrangements are good, the group sounds well rehearsed and the producers are comfortable with octave droppers and other nifty production enhancements. A little more autotune might get them to the next level. In the meantime, they have a lot to be proud of.

Hey, wow! Look who's discovered studio recording! The Ursa Minors progress to the modern era with The Little Black Dress, a vast improvement over Note to Self in almost every way.

Everything about The Little Black Dress is better than Note to Self, but one aspect remains the same — the Ursa Minors' greatest strength is solo charisma. Years ago, as a rookie reviewer on my third album review, I swooned for the womanly alto soloists on Note to Self, ultimately choosing the album as my runner-up Pick of the Year. I wouldn't make that same choice today, but I have to admit that I have a soft spot for the little bears.

Ursa Minor soloists have spunk. Whether a masculine cover of Elvis Presley, a wistful Duran Duran, a plucky Ella, or a tender Maroon 5, many of these ladies just get it, capturing the feeling of their songs. The alto soloists sing in rich tones, warming up solo lines without forgetting to punctuate melodies.

Intonation and studio work are the most noticeable improvements since Note to Self. Occasional soprano flatness and a few wonky solo pitches reminded me that the group still isn't into intonation machines, but certainly didn't leave me yelling in frustration at my stereo. Like many all female groups, the Ursa Minors succumb to the temptation to staff soaring soprano lines with just one or two singers (the "lone soprano effect" — The Remedy, Ladyfingers, She Will Be Loved). A serious problem on Note to Self, it's improved here, but a better technique is to really layer those upper voices, blend them with compression, then tone them down in the mix.

The group's studio work has moved into the late '90s. Soloists are well miked, as before, but altos are eq'ed for emphasis and occasionally octavated (Ordinary World, She Will Be Loved, I'll Remember). There are even flavorings of textural effects, like deliberately bad eq, delay, and flange. The vocal percussion is now tracked separately and eq'ed to drum-like quality. Instead of the awful, mouthy stuff on Note to Self, we have actual studio vp. Most of the percussion sounds are pretty darn good, but the tempo and pattern consistency is weak.

In fact, a general muddiness stains The Little Black Dress. Arrangements don't separate the bass line from other low alto voices and kick drums, leading to a low pitch fog (A Tisket A Tasket). Though octavation helps spread chords nicely, the altos haven't learned to sing like a bass guitar; some bass lines are tentative and off the beat. Many unoctavated alto lines stretch the altos' low ranges, causing sharpness and an uneasy intonation foundation (Ladyfingers). Tempos fluctuate on too many tracks. Some songs seem to lag behind the beat, as though the group was used to singing them at slower tempos. Lagging cutoffs and tentative entrances can cause this tempo creep. Little Bird is firmly on tempo; the group should repeat whatever tempo maintenance techniques it used here. The combination of a murky low range, sloppy chord movements, and dubious time keeping leaves some songs feeling amateurish.

Overall, The Little Black Dress is a solid offering. The Ursa Minors show promise, building on past strengths, improving on weaknesses, and getting comfortable with the studio.

The Ursa Minors' third album, The Little Black Dress, left me with mixed feelings about the overall product. There were numerous moments where I heard the soul of a great group poking out, but there was an equal amount of moments that were simply average.

I have to give props to Maxine Sharavsky since her name is splattered all over the insert having (co)arranged eleven of the thirteen songs, along with producing the CD and singing one of two solos that jumped out and caught my attention.

A Little Less Conversation opened the album with a staggered intro that built the guitar lick nicely and keeping the giggle was a nice touch to help get things rolling. Dave Sperandio, who mixed most of the album, aided the song by creating the same sloppy reverb that Elvis used. Usually, it seems too early to introduce a slower song like Ordinary World as the second track on an album, but Sharavsky's effortless solo helped to create some energy that A Little Less Conversation failed to generate.

The Remedy seemed a little too laid back for the nature of the song although I prefer this to the almost frantic-sounding arrangements that are all over the place. Something else of note is that this is the second arrangement I've heard that actually remembered to sing the climax of the song. I'm referring to the end of the bridge where the last word of "and then I'll tell you where" is suspended over the next phrase while the solo picks up the lead underneath it. I'm very grateful that the Minors had the presence of mind to keep this in since it is the gooesebump part of the song and most groups frustratingly short change it.

A Tisket A Tasket wonderfully captures that golden age big band jazz sound thanks to a great arrangement and the very expressive and playful solo by Clotilde Hainline. Big Eyed Fish didn't quite capture the intense angst of the original although Katie Lamm sounded comfortable in her own skin and thankfully didn't try to sound like Dave Matthews. I wonder if a little more speaking mixed in the singing would have helped to convey the helpless pleading of the lyrics. Some fills a la Carter Beauford would have definitely been appreciated not only here but throughout the album. The "chk" sound that resembles clicking the metal rim of the snare was the only kind of snare used and in most places didn't provide the right atmosphere for the groove. I'm amazed that out of the 23 girls in the group and the seven credited with VP no one could create a "pfft" snare solid enough to use.

Little Bird had lots of intensity but suffered from the aforementioned drum issue. Surrounded, Ladyfingers, She Will Be Loved and Hey Hey all run together with the same energy and intensity even though the songs have slightly different feels. Sir Duke has a light feel that is counteracted by the heavier sounding alto voice of Shanell Lockhart. This was not the right match between timbre and mood and it is unfortunate because I feel that Lockhart could have really shone on a slower ballad with lots of emotion behind but there are already a enough of those songs on the album already. The reharmonization of Sarah McLachlan's Angel was nice in most spots but there were too many times that chords were added that didn't help to push the song forward. It especially bothered me when the line "some comfort here" ended on an unresolved Sus 4 chord and I was confused by the seemingly random solo for a few words near the end. I'll Remember closes out the album with a nice groove but provides a finale that has the same lackluster feel as most of the other songs.

In the future I would suggest arrangements that not only have more emotional diversity, but also make full use of the size of the group. I didn't feel at any point that all of the Minors' resources were being used and because of that there is a feeling of holding back that permeates the album. The foundation for a spectacular all-female group is definitely there and the Minors should be praised for their work. I hope that they work past whatever reservations are holding them back and I look forward to hearing what comes next.