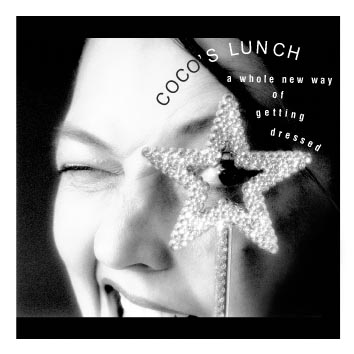 The issue of whether a percussion track using actual percussion instruments "cheapens" an a cappella album is one that perhaps deserves its own article on a website somewhere (hmm... anybody for posting on RARB's new discussion forum?). But especially with the advancements in vocal percussion over the last five years or so, both technically and technologically, the presence of any instrument on a CD submitted to RARB for review makes matters more complicated for the reviewer.

The Australia-based a cappella quintet Coco's Lunch have presented us with precisely this problem with their latest release A Whole New Way of Getting Dressed. At least seven of the eleven tracks on this album feature one or more actual instruments — in most cases, it is a mixture of percussion (I hear what sounds like a lot of djembe, as well as an occasional timbale and plenty of assorted shakers), and in one or two cases, it is the flute-playing of one of the group's members, Nicola Eveleigh.

"Ignore it!" you say. "Look beyond the instruments and focus on the singing!" Trouble is, that's almost impossible to do. The simple reality is that adding a fully-realized percussion track to so many songs obviates the group's need to create their own rhythm vocally. Mind you, these ladies have rhythm in spades, and it's evident any number of times, especially in the first few songs and in the rhythmic exercise Shifting Time, which is fascinating if not terribly enjoyable. But with a percussion track backing them much of the time, they have the luxury — some might say the unfair advantage — of falling back on chordal structures which, stripped of the percussion, would make for far less interesting a cappella music. Is it then fair to judge them on the same scale that one would apply to a similar quintet that found a way to incorporate its percussion vocally into the five available voices? Probably not.

All this talk of percussion aside, you should know that the music itself is quite good on its own merits. Featuring all originals, this album moves through a variety of styles, with echoes of Paul Simon's Graceland, a Sting-like feel on one or two songs, and a hint of gospel and blues thrown in for good measure. These ladies are all gifted singers, though I wish they had delineated their voice parts and taken credit for their solos on each song, so the listener could more easily pinpoint who is singing and when. They are blessed with a wonderful low alto (who, unfortunately, wasn't given the necessary boost during the mixing process). Four of the five show themselves to be talented songwriters as well, earning special kudos for their poetic and evocative lyrics. Overall comparisons that come to mind include SoVoSó, Rajaton and Zap Mama, but perhaps without the spit-and-polish in composition, performance, and engineering that those groups have perfected — and without the occasional "mainstream" song (cover or original) that engages the listener and makes him/her "go with" the less accessible music that is to follow.

But there's still that dang percussion. Suffice it to say that from what I heard on this album, I believe these women have it in them to create a perfectly fabulous album that is in fact truly a cappella. That said, I don't want to tell them how to create their music, which is clearly sophisticated and quite intelligent in its present form. But for a place in my a cappella library, they're going to have to lose the drums.

With a smooth blend of Jazz and world music, the five women of Australia's Coco's Lunch succeed with their fourth CD, A Whole New Way of Getting Dressed. Comparisons to early Zap Mama and Sweet Honey in the Rock are inevitable, as these women fuse world rhythms, gentle percussion, and soulful musicality on a disc with clean production aimed at capturing the live sound of the group. Jazzier than Zap Mama's first release and less esoteric than their second, A Whole New Way of Getting Dressed is accessible and enjoyable, while still bringing a fantastic array of interesting rhythms and melodies to the table.

These women know how to sing together, both as a block and supporting a lead. The blend is wonderful, and the tuning is quite good, although there are the occasional slips. Their bass is one of their great strengths, as she has phenomenal strength down low and infuses her rhythmic lines with great energy and style. The percussion, supplied on most of the disc by Alex Pertout, fits the group's sound wonderfully, providing a solid driving force without distracting from the layered arrangements. The group uses some rudimentary vocal percussion on a couple of tracks, with disappointing results. It mars their otherwise extremely polished sound on the title track.

All of the songs on the disc are originals, with four group members each taking at least one turn at composition and arranging. The styles blend together well. Sue Johnson and Gabrielle Macgregor's compositions are deeply infused with jazz and gospel. Lisa Young addresses the group's world music roots most directly with the African-inspired Thulele Mama Ya and the academic exercise in South Indian vocal percussion, Shifting Time, which is a pure delight. Jacqueline Gawler's sole composition, Sleepless, has an amazingly magical ambience.

There are still a few rough points that could be smoothed out. The tuning could still use some polishing. The vocal percussion could certainly stand to be developed. The melismas on Nicht Reserviert are a bit sloppy. The leads could stand to let go a bit more at a song's peak. But these reservations are quickly eclipsed by the group's energy, dazzling rhythms, and exotic blend of sounds and styles. Keep an eye on these women, check out this disc, and try to catch a show if you find yourself down under.

When I first popped A Whole New Way of Getting Dressed into my CD player, I just didn't get it. Like Richard Dreyfuss listening to John Coltrane in "Mr. Holland's Opus", I played it over and over again until something clicked. After all, my previous forays into world music were limited to the two latest Santana albums and some bad trance music I picked up in Israel. But like Mr. Holland, who soon understood the emotion and spirituality behind the saxophone, I too became spellbound by the vocal stylings of this unique women's group.

Coco's Lunch is nothing like your average American chick vocal band. First of all, they're Australian. The earthy, moving sounds of Zulu, Indian vocal percussion, German, and English reach the listener at the core, with eerily beautiful melodies and a perfect blend of soprano, alto, and women's bass. To be fair, the album is not pure a cappella, but the addition of percussive instruments enhances the album far beyond what the human voice could do. From African motifs reminiscent of Ladysmith Black Mambazo to the swirling jazz lines of a sweet lullaby, this album's music crosses the continents to offer a tantalizing collection of pieces overflowing with talent.

Each song stands out as being completely unlike the one preceding, yet the quality never diminishes. Blend, pitch, dynamics, and intonation never suffer despite the variety of pieces. One of my favorites is Shifting Time, inspired by the Indian percussion tradition of konakkol. A word of warning: This is not what most a cappella folks would term vocal percussion. The "percussiveness" emerges from the emphasis of syllables and the velocity of melodic sequences against a fixed pulsation. Imagine using hand clapping as a metronome stuck at 70. In comes the soloist, with a single melody sung in rhythm with the clapping. Next enters more melody, repeating the melody, followed by the harmony. As the "verse" emerges, the vocals increase and decrease tempo to create a counter rhythm against the hand claps. Listeners like myself who have not before experienced this distinctly non-Western style will find their curiosity piqued, perhaps replaying the piece (as I have often done) to discover its nuances and stirring harmonies.

Another highlight of the album is simply the women themselves. From the clarity and intonation of each note sung to the composition of the pieces (four of the five women contributed to the album), the music is a compendium of styles and techniques we Americans don't often hear from women's groups. They never even attempt to sound like a men's group with a studio-produced bass or bad attempts at vocal percussion. Talent is funneled into appropriate expressions. Thulele Mama Ya features a great rhythmic component in the middle of the song, again with hand claps, with sung vocales done in a sort of counterpoint.

Overall, a delightful album. A Whole New Way of Getting Dressed is about being a woman, connecting with nature, and connecting with people. For those uninitiated into vocal music beyond pop and jazz, its soul and energy will make you look at a cappella music in a whole new way as well.

You can find it on their web site or go directly to their distribution agent.