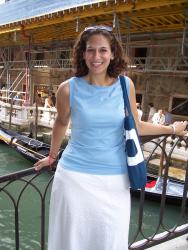 I attended Brandeis University and joined the coed group Company B. We competed in the N/ICCA, sang at a marriage proposal in the Boston Common, and put out an album. I graduated on my 22nd birthday with a B.A. in American Studies and program certificate in Journalism.

After college I relocated to Indiana University Bloomington for my Masters in Higher Education and Student Affairs, when I also became Varsity Vocals' Midwest producer to the ICCA for 2001-2002. Finished my M.S.Ed. in May 2003 and did a two-year stint in Buckeye country (Columbus, Ohio), where I spent two years working for Hillel: The Foundation for Jewish Campus Life at The Ohio State University.

In June 2005 I moved again to Carrboro, North Carolina, with the greatest co-op market down the street, and a gorgeous lake across the street from my apartment. After working in Chapel Hill for two years, I've traded in my Carolina blue for royal blue with a new position at Duke University's Office of Student Conduct.

I'm a Taurus with a penchant for travel and groovy music. I see all the musical theater I can get my hands on — I've seen over 75 Broadway shows — and I play a mean game of Trivial Pursuit. I love Panera Bread in all its hazelnut coffee glory, am obsessed with Lost and Project Runway, and will watch Back to the Future every single time it's on TV, even though I own it on DVD. In my spare (?) time, I design wedding programs, monograms, and invitations at Custom Printables and am still working on knitting things other than blankets and scarves.