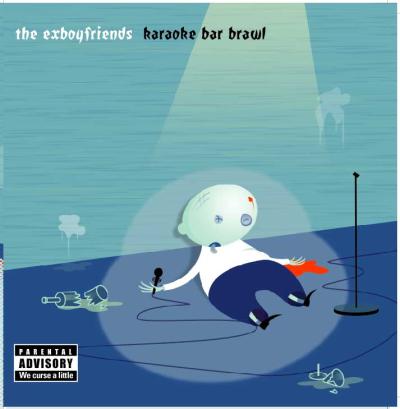 The Exboyfriends' album rocks. It screams, it wails, it moves. It tackles a genre that most of the a cappella world is too young to remember or too old to pull off. It's a rare find for a record collection, of any genre.

Karaoke Bar Brawl is leaps and bounds better than A Cappella's Dead, the first of this group's albums to cross my living room. The sound is thicker, richer, better tuned. The solos are stronger. The songs are more cohesive. The only blemish is a regrettable hidden track, that I can only hope was written for their appearances on the Howard Stern show, and not because they actually thought it was funny. The intervening years seem to have brought this group a better blend and a better engineer, to the great benefit of all. With this album, The Exboyfriends have ceased to be a novelty and come into their own as reinterpreters.

On the last album, the songs were cute ear-catchers, jokes you'd play in between the Led Zeppelin and Santana on a commercial FM classic rock station. The latest album moves them several squares ahead, to a cherished spot during "covers hour" or a set at a festival of fully-amped tribute bands. It's good enough to use as a knowing reference, too, on a late-night college radio show that plays too much Lou Reed and claims to have superior insight into the music.

It's radio ready, which puts it in the uppermost tier of the a cappella world. I highly recommend it.

The Exboyfriends are the true defenders of a cappella classic rock. Yes, there's a big difference between covering rock and actually rocking. They know. The Exboyfriends actually rock. Lighters waving, scantily clad girlfriend on your shoulders, funny-cigarette-smell-in-the-air rock. They rock with David Kern's simple organic arrangements. But it's the soloists who make The Exboyfriends a must-listen group. Raw. Edgy. And more than willing to push their vocal cords like test pilots push fighter jets. Sure, lots of groups have vocal percussionists. How many have welts from thumping on their chests? Lots of groups have low basses. How many also have basses who scream? Precious few.

Random highlights: a guest appearance by the infamous and ubiquitous former Mr. Rockapella, Sean Altman, on Lovin' Touchin' Squeezin'; a less famous, but thoroughly enjoyable cameo by guest VP Edward Chung of Duwende (quasi) fame; the immature joy of listening to lyrics like "who the fuck are you", "shove my nose in shit", and "douche, he said douche". And who could forget the hidden track extolling the virtues of statutory rape?

Two areas could use improvement. The VP is very cool throughout, but, to my ears, is too far back in the mix on nearly every track except Lovin' Touchin' Squeezin'. The sounds are right. The drive is right. The volume is too low. Rock needs its drums upfront.

Second, the energy and intensity of the covers aren't quite matched by the originals. Those sound a bit more sophomoric, as if they've backed away from the in-your-face credo and gone a bit more joke-y, a bit more cutesy. The trait sometimes shows itself in the spot-the-quote back-ups. I'm looking forward to some more aggressive originals from this group.

The Exboyfriends. Fun for the whole family? I don't think so. Fun for those about to rock? Oh yeah. Now, where's my scantily clad girlfriend?

Karaoke Bar Brawl, The Exboyfriends' triumphant sophomore release, begins with a blood-curdling scream and doesn't let up for a moment. Classic rock covers are the order of the day here, along with a couple of like-minded originals, all performed with an energy and edge unlike anything I've encountered.

As any faithful RARB reader knows, The Exboyfriends do not use vocal percussion. Rather, Dave Kern, an accomplished drummer, beats the crap out of himself to keep the rhythm. (The liner notes call it "chest, stomach, neck, and tongue percussion".) It's astonishing to hear him keep up the self-abuse for an entire album, but what's even more astonishing is how much else Kern does on this disc. He wrote all the arrangements, penned both of the fine originals, and even turns in the album's best solo, on Man in the Box.

What? An a cappella cover of ALICE IN CHAINS?? You bet, and it's the best song on the album. The "wow-da-wow-wow" backing vocals express the desperation of the lyrics better than the original's slightly too rhythmically perfect guitars could, and Kern's incredible solo is agony on record if I've ever heard it. Amazing. (I wonder if, when they do this song in concert, Kern beats the crap out of himself WHILE soloing...)

A close second for best track is 25 or 6 to 4, which brilliantly mixes in songs by The Beatles, Green Day, Pat Benatar, Led Zeppelin, Traffic, and many more with an energetic reading of the Chicago classic. (It'll take you many listens to catch them all.)

As for the rest of the album? Blinded by the Light builds to an incredible level of complexity behind Dave Curry's rich baritone. Love Song is an unjustly forgotten, very beautiful Elton John ballad, and I was ecstatic to see that The Exboyfriends covered it. Their rendition is deeply felt but marred by a naggingly flat tenor line and the fact that the lead vocal is mixed too loud. Queen's Flash's Theme is another audacious song choice whose arrangement is not up to the standard set by the rest of the disc, but Rex Eclipse's high notes and Freddie Mercury imitation are without peer. Compositionally, Not an Addict pales against the other classic songs covered here, and the tuning problems creep up again. (Hm, for another example of an out-of-tune K's Choice cover on an otherwise excellent album, check out Off the Beat's latest.)

Alas, legendary guest soloist Sean Altman is wasted on Lovin' Touchin' Squeezin'. The whole thing sounds like a rush job — the background is the least tuned on the disc, Altman doesn't sound warmed up and probably could have used several more takes, and a weird EQ setting on his voice makes him sound like Kermit the Frog. Nice guest VP by Duwende's Edward Chung, though.

Jeff Thacher's production does right by The Exboyfriends' voices, but I suspect he could have done more with Kern's body percussion. The group's energy is more than enough to drive each song, but on music that rocks this hard, one wants the drums to be more than an afterthought. I'm not quite sure how to fix that problem, but closer micing, sampling, creative EQ, or just turning it up in the mix all come to mind as possibilities. I'm splitting hairs, though; the album really does sound great.

I am of the opinion that it's pointless to try to convert people who don't like a cappella into fans. If any disc could do it, though, it would be Karaoke Bar Brawl; it's certainly the only a cappella CD I've ever wanted to crank as I do the classic rock I grew up on. Thanks to the coherency of The Exboyfriends' vision and the consistency with which they carry it out, this album is more than the sum of its slightly flawed parts. It rocks through and through, and I'd recommend it to even the most casual or skeptical a cappella fan. If the guys clean up their tuning a little and figure out how to make the "drums" sound more like drums, their third album will be a flat-out masterpiece.