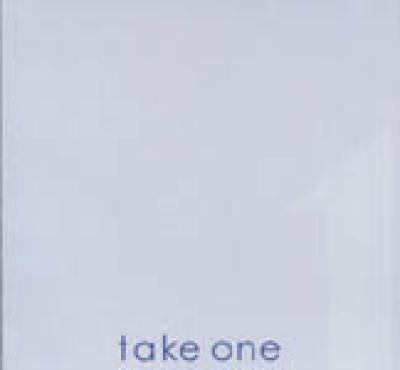 Technically, this album seems to accomplish everything it sets out to do. There's a lot of nifty layering, a lot of nifty percussion, and a lot of well-pitched raspiness and screaming.

Oh, it's not all that weird. The vocal percission throughout the album, provided mostly by Ethan Fixell with a few assists, is terrific. The background vocals on Superman have a lovely twin soprano line, and a resonant, rhythmic bassline salvages an otherwise drab rendition of The Middle. The album-opening Crawling in the Dark has a glorious energy that blows the socks of most of the collegiate competition.

Soloist Morgan McOwen has the most stunning collegiate voice of her time. Her delivery of Mama, as enclosed here, is one of the strongest cuts anywhere. But other soloists are a little more challenging for likes of me. For example, Lilia Tamm's abrasive Mother, Mother appears to hit what it's aiming at. But what a target! Likewise, Ethan Fixell (The People That We Love, Last Nite) appears to be actively choosing the poor intonation and weird tone of what passes for male pop singing these days. I don't like it on the radio and I don't like it here. Also, so much of this music takes itself so seriously! Self-important gloom, what an emotional lift.

Off the Beat is known for being in step with the times, not for swimming against the tide. If this is what the cool kids are listening to now, this is what we should expect from them. They do it well. But I'm not really warming up to it.

All hail the kings and queens of collegiate pop. It defies conventional wisdom that a group, a trailblazer from its very beginnings, could be this good for this long. What appears to be an amazing sense of institutional memory has led to a dynasty of award-winning albums with strong production values, memorable solo performances, and a definitive arranging style — one which every Off the Beat arranger apparently reads a tutorial on after joining the group. Take One is no exception to the rule, proving yet again that OTB puts out some of the best tracks in the business.

Where do I begin? Strong arrangements abound here, with full and nuanced renditions across a wide selection of alternative-pop. But what really impresses is these arrangers' ability to perfectly mimic an original when appropriate, or to go beyond it when necessary, creating something unique, different, and sometimes better. OTB perfectly captures the spirit and energy of Crawling in the Dark and the dark moodiness of Kid Fears. And where other groups would have turned Overcome and Mama into block-chord ballads, the arrangers use the background singers to create a complex and engaging interplay of sounds.

As always, the soloists of OTB set the standard by which others will be judged. The strength of the OTB singers across the album (featuring eleven different soloists) is phenomenal, but two standouts deserve special mention. Recent CARA winner Morgan McOwen one-ups herself with vocal pyrotechnics and perfect neo-soul stylings on Fallin'. But her astounding solo on Mama is simply one of the best recordings I've heard come out of a collegiate mouth. On the men's side, freshman Larry Kraut provides an engaging alternative to the traditional OTB tenor screamers. His rich and unique baritone was perfectly suited to multiple tracks: a smooth, bright take on Side and an emotional version of Live's 9-11 tribute. OTB also gets a neat hat trick on the Indigo Girls' Kid Fears, which features sisters Jessie and Abby Schneiderman as well as Kraut on Michael Stipe's trio part. The girls' tones mesh perfectly with energy and edge, and their finale with Kraut was spellbinding.

Just to remind us they're human, OTB does make a few missteps, like the slight monotony of the overproduced People That We Love and the filler tune Last Nite. And while tuning issues are less prominent here than on the last album, they do surface periodically (perhaps inevitably from the belt-fests that mark much of OTB's arranging). But when OTB gets it right, the results are peerless (as you'd see if I could rate tracks like Kid Fears or Mama 10 points on a 5-point scale). And when they get it wrong, it's still head and shoulders above a lot of the groups out there.

This is one of the best albums I've reviewed since ... oh, OTB's last album. All hail. Let them reign.

I'll start this review with an honest confession: prior to Take One, I had never heard Penn's Off the Beat before. I'd heard a lot about them, but never actually listened. I was excited to get this assignment, and waited diligently for the CD.

I've listened to it almost incessantly for the last several weeks. While I would say that the sound certainly grows on you, I must be honest — I just don't get it.

The production on this CD is intricate, and I imagine a lot of time and effort went into making this CD sound the way it does. At times, I forgot that I was listening to human voices. The CD starts with a bang, gripping the listener with the rich sound of Crawling in the Dark. I was simply amazed at the craftsmanship that went into making such a complex sound.

But it gets old. By track four, a rendition of Speed Kills by Bush, the highly produced and filtered sound starts to get tedious. It just sounds like noise. You can't distinguish parts, notes, articulations — it's just a big garbled mess.

The group also has occasional pitch problems, particularly among the sopranos. Listen to the first verse in Beautiful, the string of "who who"s plastered through Everything for Free, or the sustained notes of the chorus on track one, and it's apparent that the sense of pitch isn't always there. Inner voices also occasionally have problems, especially on the opening figure of Hands Clean. Subtle mixing of these parts disguises the problem well, however.

There are positive qualities as well. The soloists are almost perfect, each one capturing the original essence of the song and giving truly moving performances. Standouts include the soloists on Fallin' and Superman. Percussion is excellent throughout. It's been thoughtfully crafted, recorded, and mixed. The arrangements, when you can actually hear them, are excellent as well. Use of intricate, mobile inner voicing and unique and varied syllables (like on the opening of The Middle) not only illustrate great musicianship and song familiarity, but keep the track interesting. Kid Fears is an especially excellent example.

Off the Beat needs to spend some time on the basics — make sure you can sing the parts correctly and in tune before hitting the studio and spending so much time enriching the production of the album. Also, try to vary the human and productive aspects of the tunes, as in Beautiful or Mama — the contrasts are interesting and appropriate. But hitting the practice rooms will be the best use of your time; once the singers can actually sing the excellently written parts flawlessly, you'll reap the benefits of near perfect production.

And no, I didn't know maraschino cherries were really grapes. Interesting?