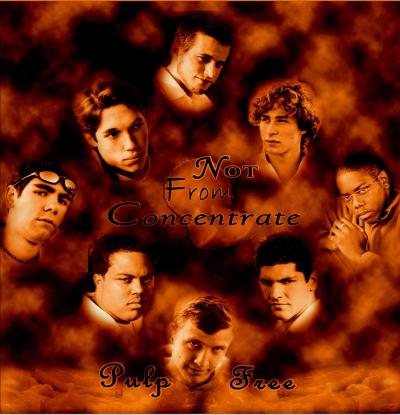 This is a great high school album. If I had been part of something like this with friends when I was in high school, I might believe people who say that These Are The Best Years of Your Life. Of course, I'm well past that stage now and never really went to high school in the first place, so maybe I'm not the best judge. What I'm trying to say is, this album is full of fun and talent and dumb jokes and great rhythm and poor tuning and ... well ... it's really promising. All of those great high school cliches.

Technically, of course, the singers on this album are a full year away from their pre-collegiate glory. Their website says they met in high school, officially formed the group at music camp in the summer after graduation, then made the record an academic year later. Perhaps because of this background, the music sounds like an idealized look back but maybe a little bit better than it actually was, in the longstanding Hollywood tradition.

The opening skit places this album firmly in genre. It's sophomoric, too long and has some terrific accents; to the right audience, it's probably reasonably funny. Ditto for the intro song, a catchy and repetitive jingle to introduce the band. The tuning is pretty lousy, but the rhythm is spot on, which pretty much describes the whole album. The groove on this disc is organic. The eight singers are pretty much always together — consonants, cutoffs, the whole nine yards. Yes, you could nitpick if you wanted, but it's orders of magnitude better than the tuning. Despite a good blend and what sounds like some attempted digital assistance, most of the chords are off-kilter. At least the solos are solid, ranging from decent to good, particularly on Babylon. And the vocal percussion is excellent, if generally limited in scope. There's a terrific set of riffs in the hidden track at the end of the disc, much to the credit of the mouth drummer in question, but it comes right after a joke about poop. So in character, alas.

The original rap, Pretty Boy, is fabulous. Some of the RARB faithful may take me to task for giving it top rating, but I stand by my score even though it's not nearly as polished as, say, The House Jacks. Here's why: the beat is terrific, all the soloists can rap fairly convincingly, and the lyrics are really well crafted. As a commuter in the Washington DC radio market, I listen to a lot of hip-hop and I have plenty of context for comparison. I can't tell you how nice it is to listen to rap that is neither misogynistic nor irritatingly intellectual. Too much rap makes too much use of the word "pimp", while the smart stuff gets too cute with SAT words that end in -ize and -ism. But even Missy Elliott can't do much better than a line like "What's a pretty boy? Always contest that they're blessed but in North Face vests they're no less than depressed".

Pulp Free is what it is and Not From Concentrate makes no bones about it. If you're in their demographic, or able to appreciate it, you'll probably like it.

Imagine it's mid-May in the American Midwest. You've just finished packing up your freshman year dorm room, and you're heading home to Madison, WI to live with your parents, work a part-time job, and sing some a cappella with your high school buds. What could be more wholesome? That's what life must have been like last summer for the eight guys of Not From Concentrate.

The group's summer fling was Pulp Free. The album, like many summer flings, was probably fun at the time but didn't amount to much. Pulp Free features easy arrangements of tired a cappella standards sung with about as much energy as a flat soda (or "pop" in the Midwest). The album's main points of interest are its awkward skits and weird musical moments.

The album opens with a skit about a group member offering beverage samples to strangers off the street. It's a forced segue into the group's theme song which repeats a five-note pattern for about two and a half minutes and features a key change, two very flat soloists, and a list of the group's a cappella strengths (which does not include accurate intonation or clean cutoffs). The group can stand proudly among the few a cappella groups with theme songs, but overall the experience for the listener is a sour taste of what's to come.

Beverage samples consumed, the group moves next to Breakfast at Tiffany's. Featuring bland and repetitive arranging and a soloist whose lack of energy is drowned out by a poorly balanced background, the song is representative of the entire album. The blend is weak with individual singers easy to pick out because of impure vowel sounds, inaccurate pitch, or an inexplicably loud mix.

The album is sprinkled with musical weirdness. The bridge of If I Ever Fall in Love is miked too close and mixed poorly. Imagine sitting in a dark room with the soloist in front, a guy singing unison melody into each ear, two tenors not blending a chord a few feet ahead, and a tenor howling a falsetto note at the back of the room. It's a little freaky. My Girl has a few accidentally Gregorian chords, a bridge that kills all momentum, and a falsetto, chamber choir ending. The album closes with a skit about a monkey and a phone call. It segues nonsensically into a VP jam full of various ways to pronounce "rik ick ear" like a deejay record scratch.

The group's bass, who admittedly has a big voice, gets too much air time. Seven of twelve tracks on the album begin with cheesy, very human sounding bass lines. Picture your dad on a car trip singing along with the bass lines on an oldies radio station.

Though the vocal percussion is all mouthy beat box and 100% human, it's also very consistent. The percussionist's instinct for drum riffs is good, and his tempo and note placement is fairly accurate.

Not From Concentrate, a group of eight non-college-affiliated college-age friends, has released their first disc, Pulp Free. While there are strong elements for the group to build on in the future, the disc leaves much to be desired.

The two largest problems the album faces are boring arrangements and poor engineering. The songs chosen are well below standard college fare, more reminiscent of high school a cappella's commercially mass-produced arrangements than unique, group-specific arranging. The arrangements are extremely simple, repetitive, and vacant-sounding. The syllables used vary occasionally and are generally appropriate, but the majority of the songs are a moving bass line with some sporadic harmonizing on top. The majority of the tunes are arranged in four parts, and there is a dearth of sustained notes in virtually all of the songs, leading an empty, vacant feel. The songs are very repetitive as well, leaving the listener uninterested with each individual song. The end result is a disc of songs that really generate no interest for the listener, and certainly evoked no emotional response within me.

Production is also poor. While I'm not certain how many mics they recorded on, its apparent that there was little to no post production done on the raw takes. Certain songs have one part too prominent in the mix (e.g., bass on Down on the Corner or tenor 1 on Babylon. On the next effort, I would recommend hooking up with a studio with more vocal experience, and then working with an experienced a cappella engineer, at least initially, to get more experience and learn the capabilities of technology for a cappella.

Tuning and blend leave something to be desired. While generally the tuning is acceptable, there are points on the disc where I cringed — the middle "My Friend" portion of If I Ever Fall in Love for example, or the ending belted note on Babylon. The chords rarely lock, which could be a function of the lack of sustained sound to guide the singers.

With the exception of Messina-Anderson, whose lackluster tuning qualities I have described above, and Latimer, who can't reach the notes on In the Still of the Night, leads typically aren't bad, but no one is truly inspired. The percussionist is skilled, but the percussion never drives the songs with enough force to move the listener. There are moments of inspiration however, such as the breakdown of My Girl. The bass is consistently good as well, with a solid, falter-free line, and excellent resonance throughout the range.

Every group needs to make a first step. I think with experience and some quality coaching these guys can make leaps in the future. I particularly enjoyed the two originals on the album, and I think their sense of fun comes out on the tracks.