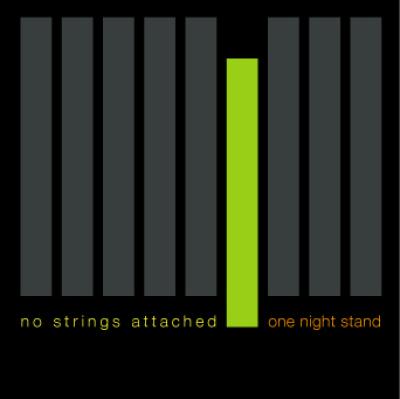 This is the thought that kept running through my head as I listened to One Night Stand, the excellent new album from U of I's only co-ed a cappella group.

Indulge me for a second with a bit of nostalgia: when I first came to Penn in ‘91, Counterparts had recently released a cassette (yes, a cassette) entitled In Formal, which featured quite a few letter-perfect transcriptions of vocal jazz pieces from Lambert Hendricks &, Ross and Take 6 and some snazzy adaptations of Van Morrison, Count Basie and others — to this day, one of the best collegiate vocal jazz albums I have ever heard (my copy is pretty warped from over-playing on road trips). However, during my four years at Penn, and especially in the few years after I graduated, the group's repertoire began to shift towards pop/rock tunes, perhaps reflecting the tastes of the members and perhaps in an effort to stay "hip" relative to the other groups on campus. Sure, there were still some vocal jazz covers, but more mainstream music started to catch up and even overwhelm the stodgier jazz oldies.

After listening to One Night Stand, I can only hope that the same does not happen within No Strings Attached, for on half of the CD's tracks, to my ear, they come as close to In Formal as any collegiate group ever has since I heard that album in my freshman dorm. Some may look with disdain on groups that sing transcriptions of arrangements by Vox One, The Swingle Singers, New York Voices, and The Real Group, and to them I say, "You try it". This material is as hard as it gets, and there are moments where the precision tuning and diction duplicated by No Strings Attached is pretty mind-boggling. I just want to bottle the sopranos' high notes and take them wherever I sing. Yes, there is a certain lack of creativity inherent in not only singing covers, but literally reproducing others' vocal arrangements, but I happen to be a huge fan of vocal jazz. If you are too, you likely won't care either.

The remainder of the album is equally solid, though I will admit to some dissatisfaction, and not just because the group's choices make me worry that they will ultimately go the way of the late 90's Counterparts. Their efforts on Garth Brooks' Wrapped Up In You and LFO's Every Other Time are really very nice. Though the Steal My Kisses/Let Me Be The One medley doesn't quite capture the essence of the originals for me, and Chris Quidlat's solo on Man in the Mirror is not the equal of his work with the Xtension Chords (nor is the arrangement quite as good as the one by the Tufts Amalgamates featured on Urban Harmony), both tracks are also top-notch a cappella musicmaking. But, knowing of the challenges this group undertook and met in the vocal jazz, the simplicity of the more pop-oriented tracks left me wanting more. Truth be told, there are many other collegiate albums on which I wish the group had used a simple bass and VP groove, a chordal, unison rhythm background, and a solid solo, but with No Strings Attached, despite some nifty mixing from Bill Hare, this combination on the pop songs just didn't "pop" for me in the same way the jazz got me juiced.

Before someone yells at me and reminds me the O Magnum Mysterium from this album was included on BOCA 2003, let me pre-empt by saying I think it was a poor choice. I think there are several BOCA-worthy tracks on this album (the opener, It Don't Mean a Thing, in particular). But while lovely to listen to, No Strings Attached's version of O Magnum Mysterium — the umpteenth I've heard in the last year or two — is by no means the cleanest (breath or diction-wise) I've heard. The whole song sounds auto-tuned within an inch of its life (the only place on this album where it felt truly blatant).

Also, a word on the technical production: according to a letter from the group I received with the album, most of it was recorded in a makeshift studio in a converted basement, using a borrowed microphone and a group member's laptop. Not the first time this has been done effectively by a college group, but one of the best examples I've heard of a group making do with limited funds and resources and still turning out a first-rate effort.

Looking at the repertoire featured on their earlier albums, NSA clearly began in the wonderful world of jazz standards. But their current website states, "Though we specialize in jazz, we're known for our wide variety of music, from choral masterpieces to jazz standards, rock favorites to popular music's most guilty pleasures.". As they continue to develop and grow as a group (they're barely a decade old), I can only selfishly offer this advice: "Don't forget your roots, kids. Please. For my sake.".

While your garden-variety collegiate album combines a majority of pop fare with a sprinkling of jazz, classical, or other styles, NSA seems to have inverse priorities. One Night Stand is dominated by jazz (six of the twelve tunes on the album are jazz or by jazz groups) and drifts off into pop, classical, and even country. It's unusual for a primarily vocal jazz ensemble to delve into other styles so deeply, and it makes for a unique disc.

NSA's strength is their blend and tuning. For a mixed ensemble, this crew manages to consistently match vowels and tone. They earn their studio stripes with the BOCA-selected O Magnum Mysterium and Danny Boy, and live up to their live reputation with Silence Of Time, taken straight from an ICCA competition performance. Other than the opening chords of All The Things You Are, the album is pretty solidly in tune.

Though NSA has the basics down pat, One Night Stand falters in a number of key areas — ironically, mostly involving their bread and butter, jazz. Despite a fantastic blend and overall tight sound, their rhythmic feel — particularly challening for amateurs in the jazz idiom — leaves plenty to be desired. Their individual voices are reminiscent of the musical theater and high-school-show-choir-trained sound that drives this reviewer (and most listeners) nuts. NSA's sopranos can't quite put Don't Mean a Thing in the pocket, nor is the group up to the challenge of The New York Voices' tricky Oh, Lady Be Good. They achieve the polish, but lack the attitude and rhthymic edge that can make vocal jazz cool. Further, for a primarily jazz group, NSA lacks a particularly strong jazz soloist. The scatting is weak, and the jazz phrasing and tightness never completely capture the authenticity and feel of the genre.

Another area that listeners will find problematic is the quality of the original arrangements on this disc — even though there are only five of them. They fail to improve on the original tunes, or to go above and beyond other a cappella arrangements. Further, the only standout soloist, the CARA-winning and much-lauded Chris Quidlat, gives his all to Man in the Mirror, but the backing voices are less than supportive — probably because the arrangement doesn't create energy and build dynamically.

Ultimately, the main reason not to buy this disc is that more than half of the tunes and their respective arrangements are simply remakes of pro recordings. This was reason enough to give NSA a "1" for Innovation/Creativity. The discerning a cappella listener should buy a Vox One, New York Voices, Real Group, or Swingle Singers album and enjoy the original, better versions, rather than checking out One Night Stand.

1. The presence of two or more distinct identities or personality states (each with its own relatively enduring pattern of perceiving, relating to, and thinking about the environment and self.* Yes.

2. At least two of these identities or personality states recurrently take control of the person's behavior.* Yes.

3. The disturbance is not due to the direct physiological effects of a substance (e.g., blackouts or chaotic behavior during Alcohol Intoxication) or a general medical condition (e.g., complex partial seizures).* Yes. Although college students have been known to ingest various mind-altering substances.

There's a real sense of two groups on this album — NSA Type I and NSA Type II. Here are my comments on each.

Give me NSA Type I any time. It's as good as any collegiate vocal jazz I've heard. But I can pass on NSA Type II any day of the week. As soon as NSA focuses their efforts on a full repertoire of jazz-influenced vocal arrangements, I'll buy their CD. They're the rare collegiate group that's good enough to pull it off. But until then, I'll feel like paying full price for half an album of really good stuff isn't a very good deal.